Dispatches from the AIA – July/August 2013 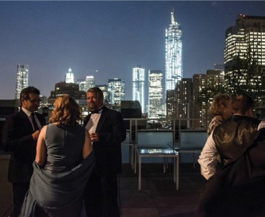 On April 24 more than 250 friends of the AIA gathered at the spectacular Tribeca Rooftop in New York City for the Institute’s fifth Spring Gala. The gala—the Institute’s largest fundraising event— is an opportunity for attendees to mingle and enjoy themselves while financially supporting the AIA’s programs and activities. This year’s event titled Gods, Greeks, and Heroes celebrated the archaeology, history, and culture of Greece. The program, hosted by Daniel Mendelsohn, award-winning writer, critic, and author of the international bestseller The Lost: A Search for Six of Six Million featured a contemporary version of an ancient Greek feast, the Bandelier Award ceremony, live musical performances, and an auction that offered bidders unique travel opportunities.

The highlight of the evening was the presentation of the AIA Bandelier Award for Public Service to Archaeology to Malcolm Hewitt Wiener, lawyer, businessman, and archaeologist, in recognition of a lifetime of extraordinary contributions to the field. As an archaeologist, Wiener focused on Aegean prehistory, authoring important studies on Minoan and Mycenaean Greece, as well as on the interconnections between Greece, Egypt, and the Levant in the Bronze and Early Iron Ages. Wiener founded two nonprofit archaeological organizations: the Malcolm Hewitt Wiener Foundation and the Institute for Aegean Prehistory (INSTAP). INSTAP, now the largest foundation of its kind in the world, supports scholars in Europe, North America, and the Pacific. Wiener also founded the Malcolm Wiener Laboratory for Archaeological Science at the American School of Classical Studies in Athens and together with his wife, Carolyn, created the Malcolm and Carolyn Wiener Laboratory for Near Eastern and Aegean Dendrochronology at Cornell University.

Strasser was awarded the Cotsen Grant for “midcareer” project directors for his work at the Mesolithic site of Damnoni on Crete. Damnoni, the earliest excavated archaeological site on the island, was also the first Mesolithic site to be excavated on Crete. Strasser’s research reveals the nature and extent of Mesolithic activity in the area and presents the first Cretan archaeological assemblage from that time period. The discovery and exca- vation of Damnoni deepens the early prehistory of Crete, and also adds to the growing evidence for hunter-gatherers inhabiting Mediterranean islands—an idea that contradicts the conventional wisdom that preagricul- turalists did not live there.

Leidwanger was awarded the Cotsen Grant for “first-time” project directors for the Marzamemi Maritime Heritage Project in Sicily—a collaborative excavation, survey, and heritage management initiative that focuses on the maritime landscape and seaborne communication off the coast of southeast Sicily. The project will investigate underwater sites located at the intersection of the eastern and western Mediterranean in order to understand regional and interregional maritime exchange from the early Roman era through Late Antiquity. Leidwanger will lead excavations of the wreck of the Marzamemi II, which sank while carrying prefabricated architectural elements for the assembly of a Byzantine church, along with other cargo from the northern Aegean during the sixth century. Equally important to this research, the project situates excavation within a broader dialogue on natural and cultural heritage practices. It utilizes community archaeology and public outreach to implement state- of-the-art site management, alongside local initiatives for environmentally sustainable tourism and economic development. To read more about the Cotsen Excavation Grants, please visit www.archaeological.org/grants.

The AIA awarded its most recent Site Preservation Grant to the Eastville Community Historical Society (ECHS), a grassroots neighborhood organization in Sag Harbor, New York. ECHS will use the grant to support preservation activities at the St. David African Methodist Episcopal Zion Cemetery and encourage community stewardship of this important heritage site that represents a working class community of African American, Native American, and Irish immigrant residents from the ninteenth and early twentieth centuries.

The Eastville neighborhood is part of the Sag Harbor National Historic District and beginning in the ninteenth century was home to an ethnically diverse, working-class community that was involved mainly in maritime activities. The historic properties in Eastville, which include the St. David AME Zion Church and its associated cemetery, are significant for the archaeology of free people of color as sites of African American and Native American labor, land ownership, and religious practice following the abolition of slavery in New York State. The cemetery was founded in 1857 for the church’s congregation and was used until the middle of the twentieth century—the last burial was in 1996. The Church deeded the cemetery to the ECHS in 2001. The ECHS currently is conducting a publicly engaged archaeological program at the cemetery that includes historic documentation, GIS mapping and photogrammetric modeling, and plans for remote sensing and the establishment of preservation guidelines. The Society’s research focuses on ethnic and class identity, kinship, mortuary ritual, and religious beliefs within a diverse community.

Although, the cemetery is an important part of the history of the Eastville community, it is currently threatened by natural erosion, human encroachment, and extreme weather events. Additionally, its local visibility and educational potential have not been fully realized. The ECHS will use the AIA grant to preserve the site by physically protecting and maintaining it, teaching the local community about stewardship, and developing educational and outreach programs for local schools, residents, and visitors. A portion of the grant will be used for signage and fencing that will delineate the boundaries of the cemetery and mark it as a cultural heritage site.

Educational efforts to develop school programs for classroom use and site visits will focus on archaeological concepts such as culture and material culture, tools and techniques, and stewardship, as well as historical subjects, including the histories of people of color on Long Island, immigration, and maritime commerce. Public outreach efforts aimed at both the local community and visitors to Sag Harbor will include the promotion of seasonal walking tours of historic Eastville, an Adopt-a-Grave program, restoration workshops, and public lectures. A public forum held in November 2012 generated suggestions for sponsorship, volunteering, and publicity from various stakeholders. These suggestions will be incorporated into the outreach efforts. Through these comprehensive education and preservation initiatives, the ECHS will protect an important archaeological and historical site and bring to light the rich cultural heritage of the community while ensuring its protection for future generations.

The AIA Site Preservation Program is happy to announce the completion of an AIA-funded project at the Stafford Civil War Park in Stafford, Virginia. (The initial report on this project appears in “Dispatches from the AIA,” Archaeology July/August 2012.) The grant awarded to the Friends of Stafford Civil War Sites (FSCWS) was used to install eight interpretive signs around the park. The signs introduce visitors to each of the historical sites within the park and explain each site’s significance and relationship to the largest Union Army encampments of the Civil War in Stafford County, Virginia, during the winter of 1863. The material and historical content of the signs was coordinated with Stafford County Officials, local National Park Service personnel, the VA Department of Historic Resources, the VA Army National Guard’s Cultural Resource Program Manager, and the Senior Historian of the U.S. Army’s Military History Institute, Carlisle Barracks, Pennsylvania.

The AIA and the European Association of Archaeologists (EAA) continue to work together to advance the discipline and our Institutes’ missions and goals. The 19th EAA Annual Meeting will be held in Pilsen in the Czech Republic from September 4 to 8, 2013. The meeting is being organized by the University of West Bohemia with support from the City of Pilsen and the Pilsen region. The Pilsen region boasts a long tradition of archaeological research, as well as a dynamic economy, vibrant culture, and modern infrastructure. The conference will offer a scientific program that reflectscurrent issues in European archaeology and beyond and provide opportunities for attendees to discover the archaeological monuments of West Bohemia. The AIA will once again have a presence in the exhibit hall and at the meeting. More info on the venue and the academic program are available at www.eaa2013.cz.