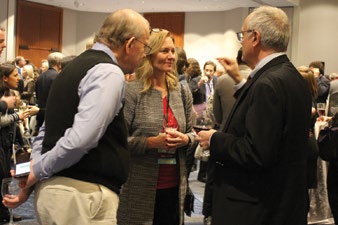 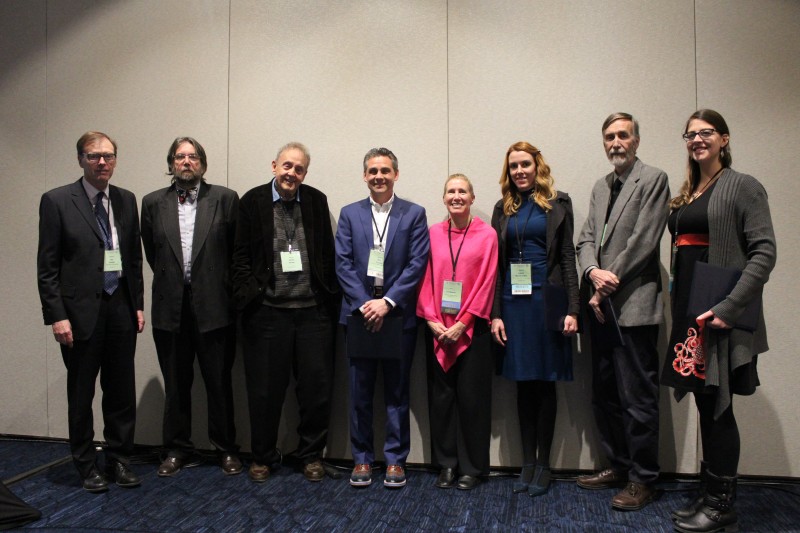 Attendees at the 119th AIA-SCS Joint Annual Meeting in Boston added several new words to their vocabulary, including “bombogenesis,” “snowpocalypse,” and “snow cyclone,” as they encountered the massive snowstorm that blanketed most of the Northeastern part of the United States. The first major storm of 2018—almost a foot of snow accompanied by hurricanestrength winds, severe coastal flooding, and bitter cold—hit Boston on January 4, the opening day of the Annual Meeting. Despite the adverse conditions, more than 1,900 archaeologists, classicists, and philologists arrived in Boston for four days of academic paper presentations, workshops, roundtable discussions, receptions, and special events.

The Annual Meeting’s tone was set at the program’s first public event, an engaging and entertaining lecture presented by John K. Papadopoulos of the UCLA Cotsen Institute of Archaeology, “The Ancient Methone Archaeological Project: 2014– 2017.” Papadopoulos described how ancient Methone’s strategic location on the Thermaic Gulf attracted traders, prospectors, colonists, and conquerors from various parts of the Greek world and the broader Mediterranean. Philip II of Macedon conquered the site in 354 B.C. in a siege that famously cost him an eye.

The Annual Meeting featured 88 academic sessions and several special events, including the Annual Conference for Heritage Educators and a Society members’ forum. The Conference for Heritage Educators was the fourth in a series of events designed to create a collaborative network, discuss issues and challenges, and initiate common projects. At previous meetings, participants drafted a statement of ethics, encouraged more publications, called for more program evaluations and assessments, and discussed the creation of stand-alone heritage education organizations.

This year, the conference featured a panel discussion with representatives from a variety of organizations including state and federal agencies, museums and historical societies, and avocational associations. Sessions covered such topics as training the trainers, writing grant proposals, writing for the public, and program evaluation and assessment. The proceedings of the conference will be made available on the AIA website.

The Society members’ “Forum on Looted Art, Archaeology, and Restitution: The Napoleon and Al Mahdi Cases,” was part of a series of programs designed to give AIA Local Society members the opportunity to participate in meaningful conversations about archaeological issues. Each forum’s topic is chosen by a task group within the AIA Societies Committee. The task group researches the topic and prepares a study guide with background information and lists of resources and forum questions. The study guides are distributed to Society officers who can lead discussions with their members. The goals of the forum are to provide Societies and their members with an opportunity to share their opinions with the national office and the rest of the AIA membership. It is also an opportunity for a Society to organize an engaging and interactive event to attract new and diverse audiences.

AIA Presents Annual Awards at AM

Gold Medal for Distinguished Archaeological Achievement to Ian Hodder, Dunlevie Family Professor at Stanford University. Hodder has been one of the most influential archaeological thinkers since the early 1980s, when his critique of the processual approach spawned the post-processual movement that has since driven much of archaeological thought. His influential publications and socially engaged, postmodern archaeology set the field’s intellectual agenda throughout the final two decades of the twentieth century and has continued into the first part of the twenty-first.

Martha and Artemis Joukowsky Distinguished Service Award to Robert Littman, Professor and Chair of Classics at the University of Hawaii at Manoa. Littman is the main force behind the vibrant and active AIA Local Society on Oahu and has been the voice of archaeology and the AIA in Hawaii for 40 years. He has been instrumental in bringing the world of Mediterranean archaeology to the island and in making the AIA a thriving part of its community.

Outstanding Public Service Award to Bonnie Magness-Gardiner, who has promoted cultural heritage preservation in her many years of service to the U.S. government in different capacities, including as the first program manager of the FBI’s Art Theft Program and as a senior cultural property analyst in the Cultural Heritage Center of the Department of State’s Bureau of Educational and Cultural Affairs. She also assisted the U.S. Department of State’s recovery and reconstruction efforts in the aftermath of the looting of the Iraq National Museum.

Excellence in Undergraduate Teaching Award to David Soren, Regents Professor of Classics and Anthropology at the University of Arizona. Soren has garnered almost every possible teaching award at Arizona and has drawn majors by the dozens into classics and anthropology. He founded the year-round Orvieto Study Abroad Program and has worked to expand the curriculum there to include art, art history, English, history, Italian, music, journalism, psychology, and communications.

James R. Wiseman Book Award to The Roman Forum: A Reconstruction and Architectural Guide, by Gilbert J. Gorski and James E. Packer (Cambridge University Press, 2015). The publication successfully combines a coffee table book format with a scholarly encyclopedia, the result of the collaboration between Gorski, an architect, and Packer, a professor of classics. The book will serve as a reference work for all students of Roman architecture and topography.

Felicia A. Holton Book Award for a major work of nonfiction written for the general public to Robert L. Kelly for his book The Fifth Beginning: What Six Million Years of Human History Can Tell Us About Our Future (University of California Press, 2016). Kelly examines four key developments, or “beginnings,” in the six-million-year history of humanity—the emergence of technology, culture, agriculture, and the state—and in the final chapter speculates on what may lie in store for humanity in a “fifth beginning.”

Award for Outstanding Work in Digital Archaeology to the Pompeii Bibliography and Mapping Project, an open online resource that integrates over two centuries of scholarship with innovative digital tools to create a unique research tool for those studying the site of Pompeii.

Graduate Student Paper Award to Chelsea Gardner, University of British Columbia and Crake Fellow at Mount Allison University, for her paper “Money, Marbles, and Chalk: The Ancient Quarries of the Mani Peninsula.”

Runner-up for Graduate Student Paper Award to Laure Marest-Caffey, University of California, Berkeley, for her paper “Reconstructing Networks from the Archive of Seleukia on the Tigris: Ruler Portraits on Hellenistic Seals.” Both papers were delivered at the 118th Joint AIA-SCS Annual Meeting held in Toronto, January 5–8, 2017.

AIA Lecture Program Begins Second Half of the Season

The second half of the 122nd year of the AIA Lecture Program began in January. The schedule for the 2017–2018 Lecture Program is online at archaeological.org/lectures. Lectures run from early September to the end of April. As always, all lectures are free and open to the public. Be sure to spread the word to interested friends and family.

If you are an undergraduate or graduate archaeology student trying to get on your first field project, we encourage you to apply for the Jane C. Waldbaum Archaeological Field School Scholarship. The $1,000 grant can assist you with the expenses associated with attending a field school. Applications are due by March 1, 2018.

For those of you pursuing a career in museum studies, the Elizabeth Bartman Museum Internship Program is accepting applications. The program assists graduate students or those who have recently completed a master’s degree with the expenses associated with participating in a museum internship either in the U.S. or abroad. The deadline is April 1, 2018.

The AIA has revised the requirements for people applying for its grants. Unless stated otherwise, to qualify for a grant, an applicant must have been a member of the AIA in good standing for two consecutive years (one year for students) at the application deadline. Please review the application requirements for AIA funding at archaeological.org/grants.