Dispatches from the AIA – March/April 2011 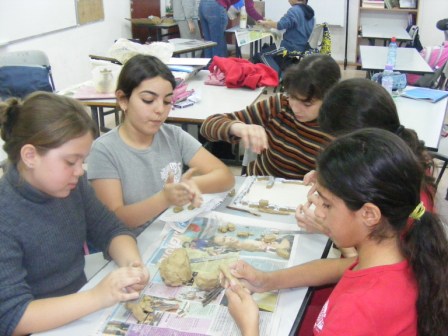 A Toast to the Past

In April 2009, the AIA featured a unique Maya feast at its first-ever gala held at Capitale in New York City. The meal won BizBash’s New York Event Style Award for best Overall Catering. The Institute hosted a second gala in April 2010—featuring the cultures, traditions, and archaeology of Peru—and is currently planning a third event. The galas are the latest addition to a diverse array of outreach programs that the AIA organizes annually. These programs reach out to hundreds of thousands of people informing them about the importance of understanding, protecting and preserving our cultural and material heritage. Proceeds raised from the galas make it possible for the AIA to continue these efforts.

This year, on April 26, the gala returns to Capitale and will feature the rich heritage, and traditions of Ireland. Irish Cultural Ambassador and acclaimed actor, Gabriel Byrne, will host an evening that spotlights both ancient and modern Ireland, and includes a contemporary Celtic feast, musical performances, and

archaeologically themed auction items including travel. A highlight of the gala is the presentation of the Bandelier Award for Service to Archaeology. This year it will be given to George Bass for his efforts in establishing the discipline of underwater archaeology and for his achievements in that field over the last fifty years. Attendees will be treated to an unforgettable night of fascinating and inspiring sights, sounds, and tastes as the Institute celebrates archaeology and Ireland.

To support the Institute and its mission, join the AIA on April 26th at Capitale. For more information about this event, visit www.archaeological.org/gala or call 857-305-9350.

In January 2011 at the 112th AIA Annual Meeting in San Antonio, Texas, the AIA Site Preservation

Committee presented its first Best Practices in Site Preservation Award to Giorgio Buccellati for his exceptional conservation work at Tell Mozan (ancient Urkesh) in Syria and particularly for his efforts in the conservation of mudbrick—a notoriously difficult material to preserve.

By recognizing and publicizing these exceptional projects, the Committee hopes to encourage other archaeologists to adopt and utilize these practices. Tell Mozan, dating from the third millennium b.c., was an important urban center of the Hurrian civilization. Buccellati and his team have been working at

the site for over 20 years and during that period their excavations have exposed numerous mudbrick structures. Exposure to the elements causes the extremely fragile mudbrick to deteriorate rapidly. Traditionally the delicate structures have either been reburied or encased in modern mudbrick. Buccellati and his team have come up with an alternative by developing protective covers that preserve the original mudbrick while still displaying the form of the walls. The covers are low-cost, renewable, locally constructed, and easily removed to allow for inspection of the walls.

Buccellati’s innovative approach combines archaeological research with creative preservation solutions. Just as critical to the long-term preservation of the site is Buccellati’s ability to work with the local community to provide training and income and thereby ensure its commitment to the project. Buccellati

is currently working to create a 91/2-square-mile eco-archaeological park that will better protect Tell Mozan and its environs.

Nominations for the award can be made at www.archaeological.org/sitepreservation.

AIA in the Lone Star State

event organized by the Institute. The four-day conference brings together a mix of professional and avocational archaeologists, classicists, epigraphers, heritage specialists, and members of the general public interested in learning about the latest archaeological research and discoveries. The 112th AIA Annual Meeting was held this year in San Antonio, Texas from January 6 to January 9. Over the course of a long weekend, attendees were presented with a wide range of formal academic sessions, public outreach programs, social events, and tours.

While the meeting is primarily an opportunity for professional archaeologists to present new discoveries and fresh ideas to their colleagues for discussion and debate, the AIA has worked very hard over the last few years to ensure that the program has something for everyone. The 2011 program was one of the most diverse in recent years. The academic program included over 300 presentations, several workshops, and colloquia with topics such as a reexamination of pottery in the classical world, discovering and uncovering shipwrecks in Turkey, conservation in Egypt, and teaching archaeology to K–12 students. A day long workshop organized by the Department of Defense focused on issues related to the protection of cultural heritage in areas of conflict. In addition to the academic sessions, participants had the opportunity to tour the Gault archaeological site and attend several special events, including an opening night public lecture

on shipwrecks followed by a reception at the San Antonio Museum of Art, a two-day archaeology fair co-organized and co-hosted by the Witte Museum, a series of roundtable discussions, and several receptions hosted by various academic organizations and universities. (To see the complete program, visit archaeological.org/annualmeeting.)

The program also allowed the AIA to highlight its global partnerships. Both the German Archaeological Institute and the Institute of Archaeology of the Russian Academy of Sciences hosted sessions at the conference. These international partnerships have allowed the AIA to expand its programming to include new audiences. Several AIA members who have made significant contributions to the field of archaeology and conservation were recognized for their efforts at the annual AIA Awards Ceremony. (See AIA Award Winners.)

The presentations, workshops, colloquia, receptions, lectures, fairs, exhibits, and other events all added up to a very busy and successful annual meeting. Please be sure to join us at the 2012 Annual Meeting, which will be held next January in Philadelphia.