Dispatches from the AIA – March/April 2013 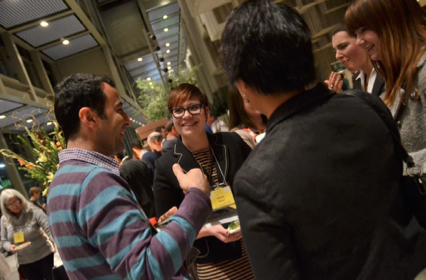 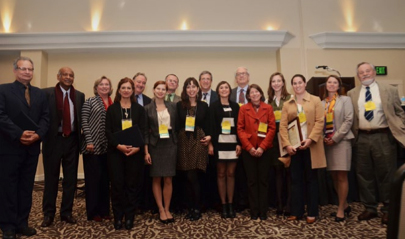 Over four days, from January 3 through 6, the 114th AIA-APA Joint Annual Meeting featured more than 800 papers, presented in 140 sessions, to approximately 2,300 attendees, making it the largest academic program ever offered at an Annual Meeting. But the academic papers were only one part of a diverse program that also included a public lecture, several colloquia and workshops, roundtable discussions, poster sessions, public readings, multiple receptions and dinners, and even an opera. With its varied program and agenda, the Annual Meeting in Seattle was a wonderful opportunity for attendees to discuss the latest archaeological findings and research, to network with other members of the archaeological community, and to socialize with colleagues and friends.

The meeting kicked off with an outstanding public lecture titled “The Ancient Village and Synagogue at Huqoq in Galilee,” presented by Jodi Magness, Kenan Distinguished Professor for Teaching Excellence in Early Judaism at the University of North Carolina at Chapel Hill. Magness’ lecture featured the spectacular mosaics discovered at the site of Huqoq in June 2012. Her lively presentation spanned several centuries and wove together evidence from archaeology and history to present a compelling account of the mosaics, their significance, and the story of their discovery. The lecture was followed by an Opening Night Reception in the spectacular glass- enclosed lobby of the Washington State Convention Center—one of the venues for the meeting, along with the Sheraton Seattle and the Grand Hyatt hotels.

Highlights from the academic program included the AIA Presidential Plenary Session titled “The Ancient City,” which discussed urbanization in Europe, Southeast Asia, South America, and North America. The plenary session, organized by AIA President Elizabeth Bartman, was the second in a series that has in successive years investigated major archaeological themes.

A symposium organized to honor Jeremy B. Rutter, winner of the 2013 AIA Gold Medal Award for Distinguished Archaeological Achievement, addressed the impact of Rutter’s work and interpretations on pottery analysis in the Eastern Mediterra- nean. Major archaeological projects supported by the Packard Humanities Institute (PHI) were featured at a colloquium honoring David W. Packard, Jr., winner of the 2013 AIA Outstanding Public Service Award. And the Cultural Heritage by AIA-Military Panel (CHAMP) organized a workshop that discussed best practices for aiding the military in preserving cultural heritage.

The 114th Annual Meeting featured several new programs, including the AIA Evening Lightning Session and the Undergraduate Paper Session. The Lightning Session was a fast-paced, informal session in which speakers gave five-minute presentations on current research, case studies, and methodological problems to an audience that was encouraged to provide feedback and comments. The Undergraduate Paper Session provided six of the Institute’s younger scholars with the opportunity to present their work to the conference’s international audience of professional archaeologists, classicists, and epigraphers.

But the latest discoveries and research findings were not the only themes covered at the Annual Meeting. Several workshops and round- tables featured topics of practical importance to archaeologists. The AIA Museums and Exhibitions Committee and the Seattle Art Museum co-organized a workshop moderated by Kenneth Lapatin of the J. Paul Getty Museum that discussed the challenges and goals of displaying ancient works of art in an encyclopedic museum. In “Integrating Conservation and Archaeology: Exploration of Best Practices,” a workshop sponsored by the AIA Conservation and Site Preservation Committee, a panel of seven archaeologists and conservators discussed how conservation measures can be effectively integrated with archaeo- logical research at both terrestrial and maritime sites. The AIA Over Lunch discussion series featured intellectual property attorney and academic Paul Connuck offering useful advice on protecting intellectual property rights. The Job Search Workshop provided job-seekers with guidance on finding jobs, and the Beginning Career Professionals Cocktail Networking Hour encouraged recent graduates and early career professionals to socialize and interact.

The AIA-APA Joint Annual Meeting is an important forum for the discussion and exchange of information and ideas. It provides opportunities for participants to create new partnerships and collaborations, encourages scholars and scholarship, and fosters the growth of the discipline. We invite all of you to participate in this essential annual event at the 115th AIA-APA Joint Annual Meeting in Chicago from January 2 to 5, 2014. See you there!

A notable and (very) popular event at the Annual Meeting, the AIA Awards Ceremony celebrates the achievements and accomplishments of individuals who have made significant contributions to archaeology and to the Institute through their research and discoveries, innovative techniques and ideas, publications, teaching, and service. This year’s list of winners included archaeologists, museum professionals, scientists, conservators, and philanthropists.

AIA and the Burke Entertain and Educate Hundreds at Archaeology Fair

For the last 13 years, a major public outreach event at the Annual Meeting has been the AIA Archaeology Fair. Through public-friendly, hands-on programs suitable for people of all ages and interest levels, fairs highlight archaeology. The event is especially popular with families, students, and teachers, and is a great way to introduce people to archaeology and the AIA. Presenters at the fair come mainly from local museums, archaeological organizations, historical societies, and universities. The event is an opportunity for these groups to connect with each other, present their programs and resources, and, most importantly, interact with the public. For the AIA, it is a way to get people involved with archaeology and discover local resources.

The 13th Annual AIA Archaeology Fair was co-organized by the Burke Museum of Natural History and Culture located on the campus of the University of Washington in Seattle. The fair was the signature event of the Burke’s annual Archaeology Day celebration. Almost 800 people attended the event and interacted with the AIA and eight area organizations, including the Burke Museum Archaeology Department, the Washington State Historical Society, the Center for Wooden Boats, the Suquamish Nation, the University of Washington Archaeology Department, the AIA Seattle Local Society, and Legio VI—Castra Ferrata, Cohors II, a Roman reenactment group. Visitors learned about ancient Egyptian mummies, the archaeology of the Puget Sound, the life of Roman soldiers, Inca quipus, ancient rock art, and much more! Attendees tried on Roman armor, identified local artifacts, and participated in atlatl-throwing. By interacting with the various groups and participating in the activities, each visitor had an opportunity to delve deeper into the wonderful world of archaeology.

In his acceptance speech on receiving the 2013 AIA Outstanding Public Service Award, David W. Packard, Jr., mentioned that he had first attended an AIA meeting 50 years earlier as a graduate student. By presenting Packard with the Outstanding Public Service Award, the AIA recognized and honored Packard’s long involvement with archaeology and his continuing generous support of archaeological research through the Packard Humanities Institute (PHI).

Archaeology, however, is not Packard’s only interest. Through PHI, Packard also supports the preservation of film and music. Music, in fact, is one of Packard’s enduring passions. This love of music and archaeology led Packard and PHI to support Opera San Jose’s production of Mozart’s epic drama Idomeneo—the mythical story of the king of Crete’s return from the Trojan War. The beautifully staged production included sets inspired by Minoan archaeological sites on Crete. A film made of the production was premiered at the Annual Meeting in Seattle. Multiple daily showings of the opera were held at the AMC Theater located half a block from the Washington State Convention Center. The opera was a wonderful and unique addition to the program and the AIA extends its thanks to Dr. Packard.

Representatives from many of the 108 AIA Local Societies attend the Annual Meeting. It is therefore an occasion for the AIA to recognize the important service that the Societies provide in fulfilling the Institute’s mission in their local communities. The Society Representatives Breakfast is a popular program that provides an opportunity for Society officers and representatives to meet with one another, discuss Society business and programs, and honor individuals and Societies for various accomplishments. At this year’s meeting, Vice President of Societies Thomas Morton presented the Foot Soldier Award to Meg Morden for her long service to the Toronto Society, the Lecture Flyer Award to the North Alabama Society, the Best Website Award to the Houston Society, and the Golden Marshalltown Award for the greatest percentage increase in member- ship to the Eugene Society. Additionally, two new Local Societies—Edmonton and Central Carolinas—were chartered at the AIA Council Meeting, bringing the total number of AIA Local Societies to 110.