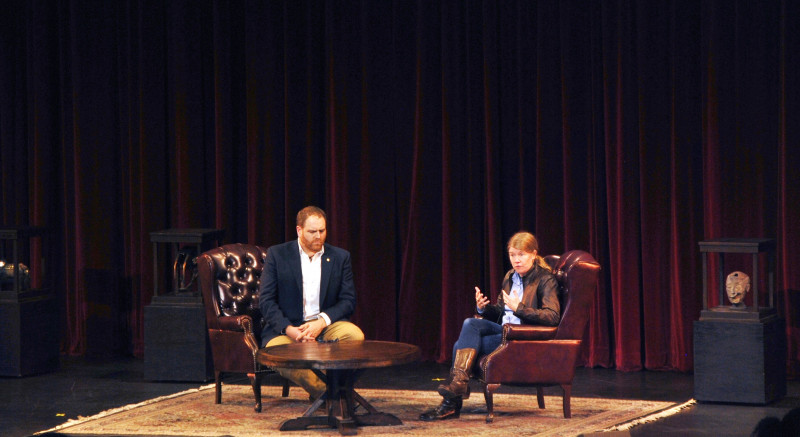 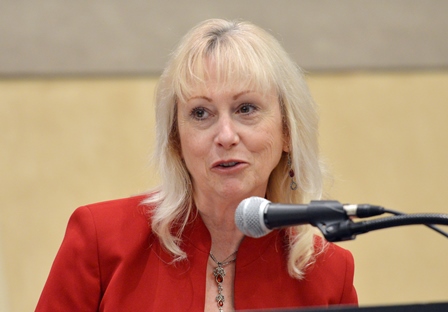 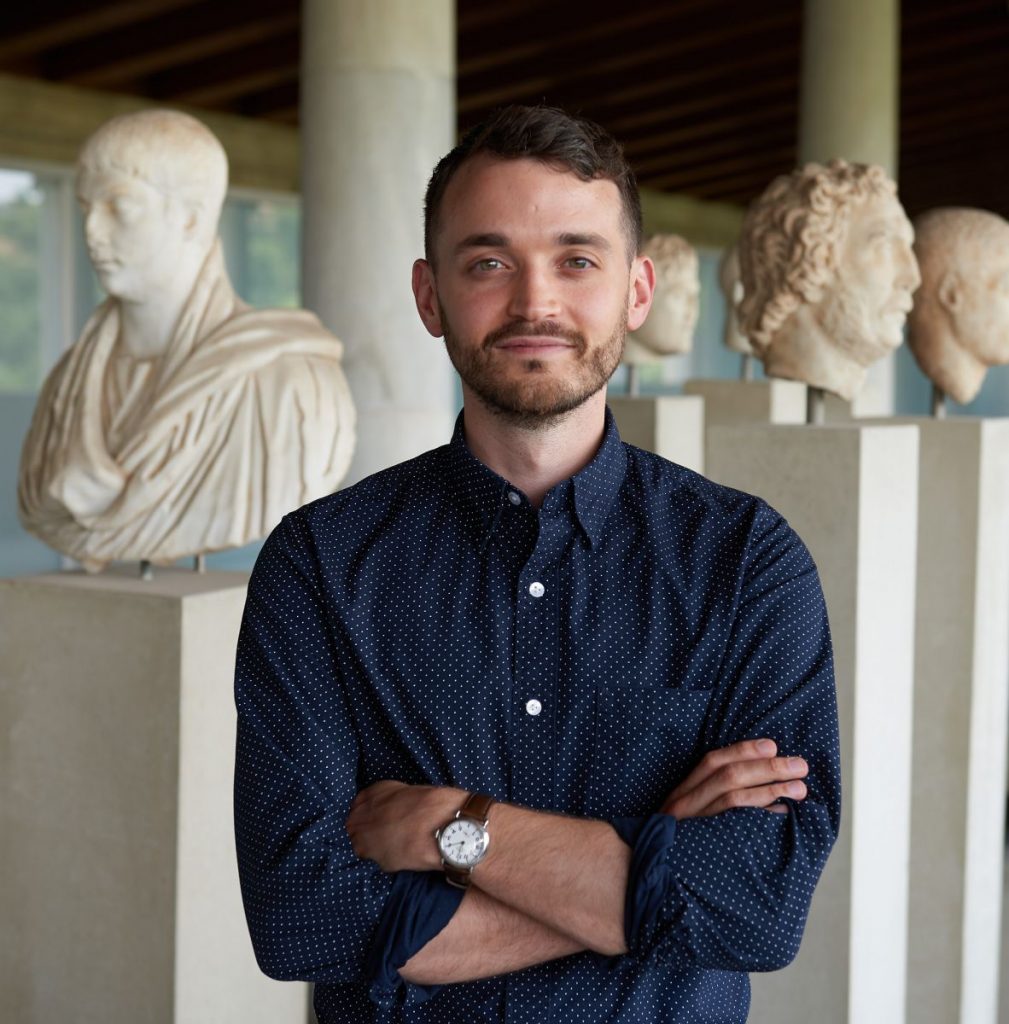 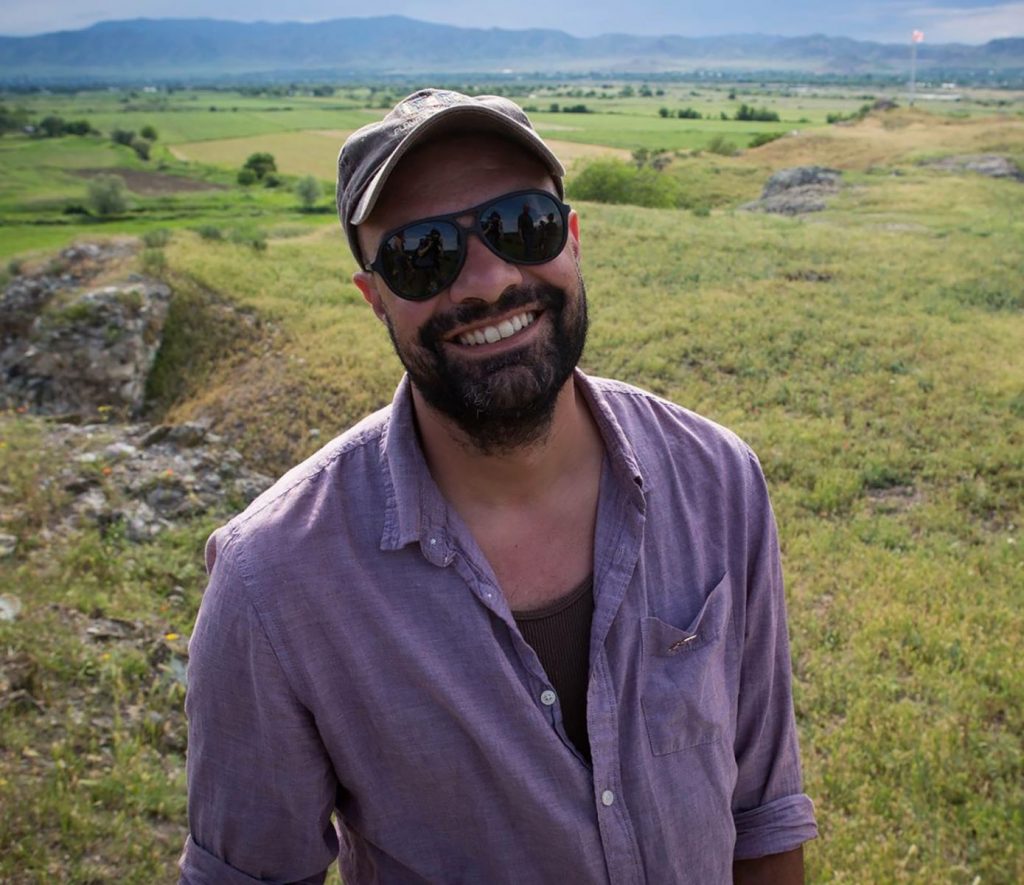 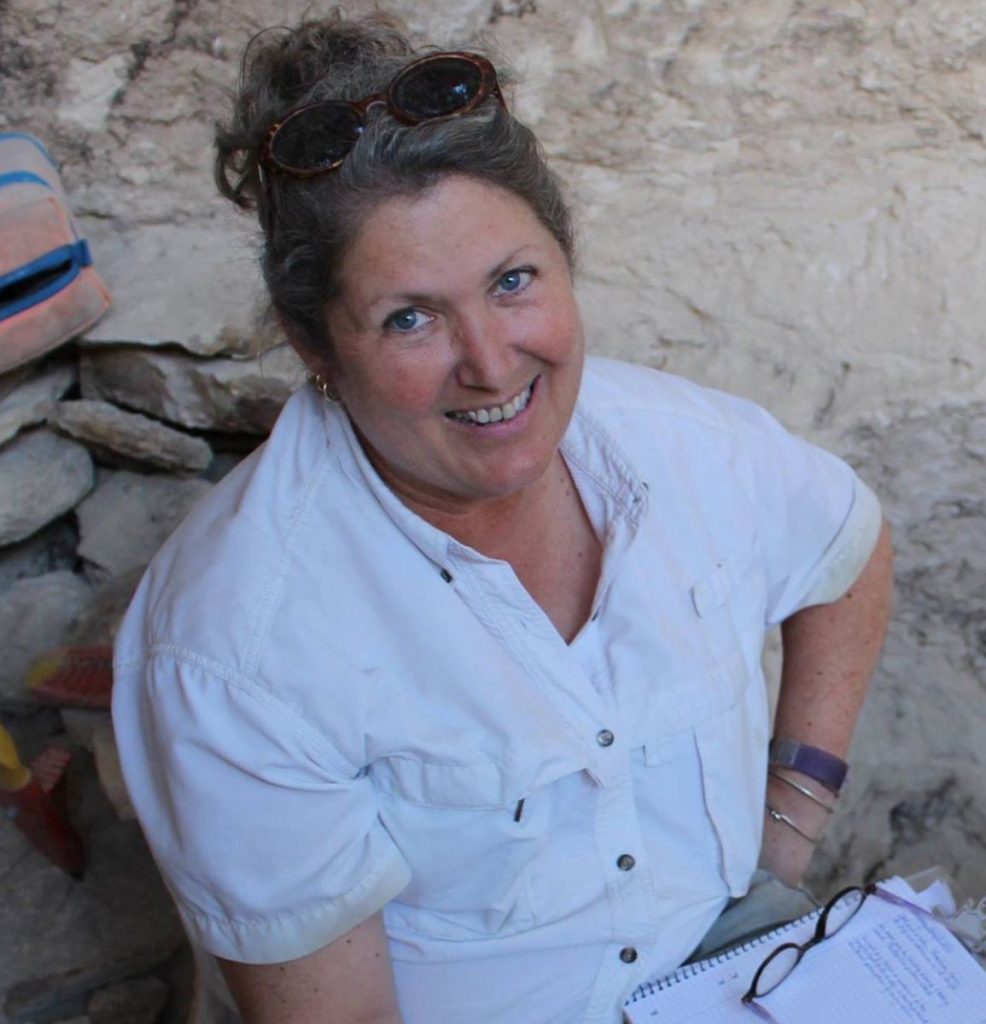 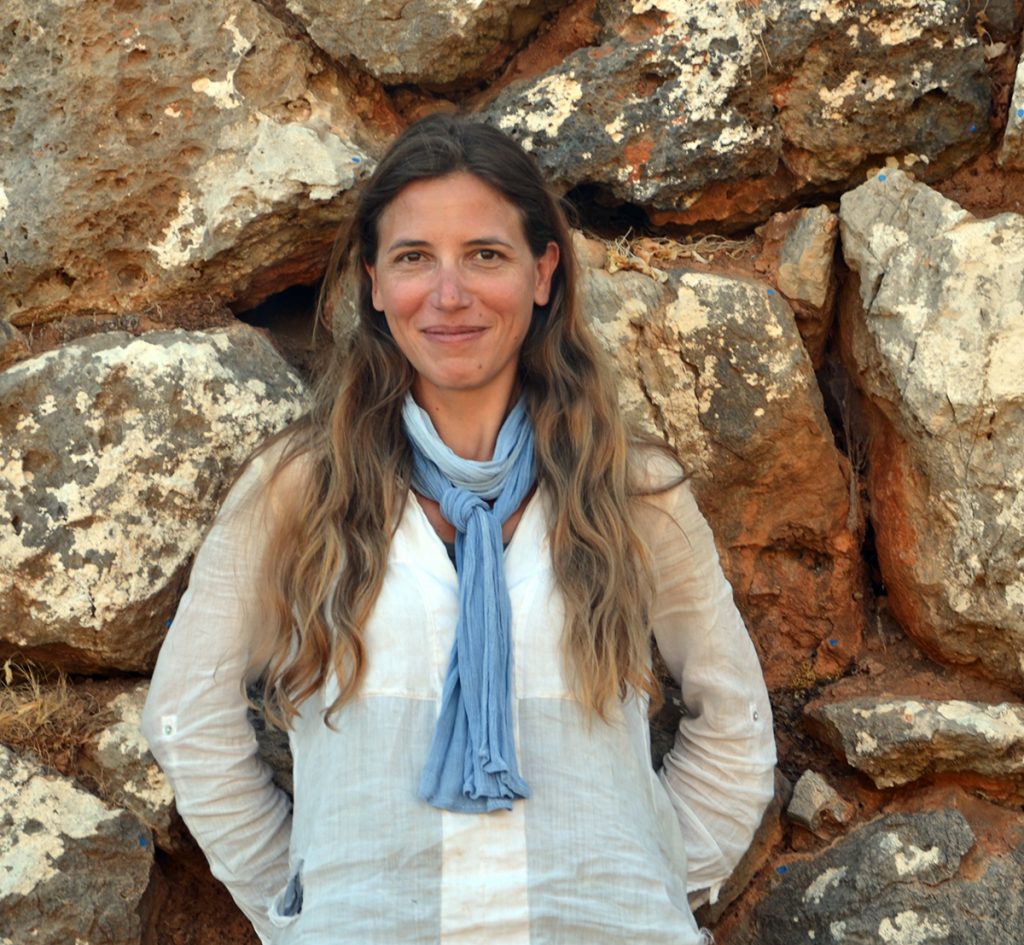 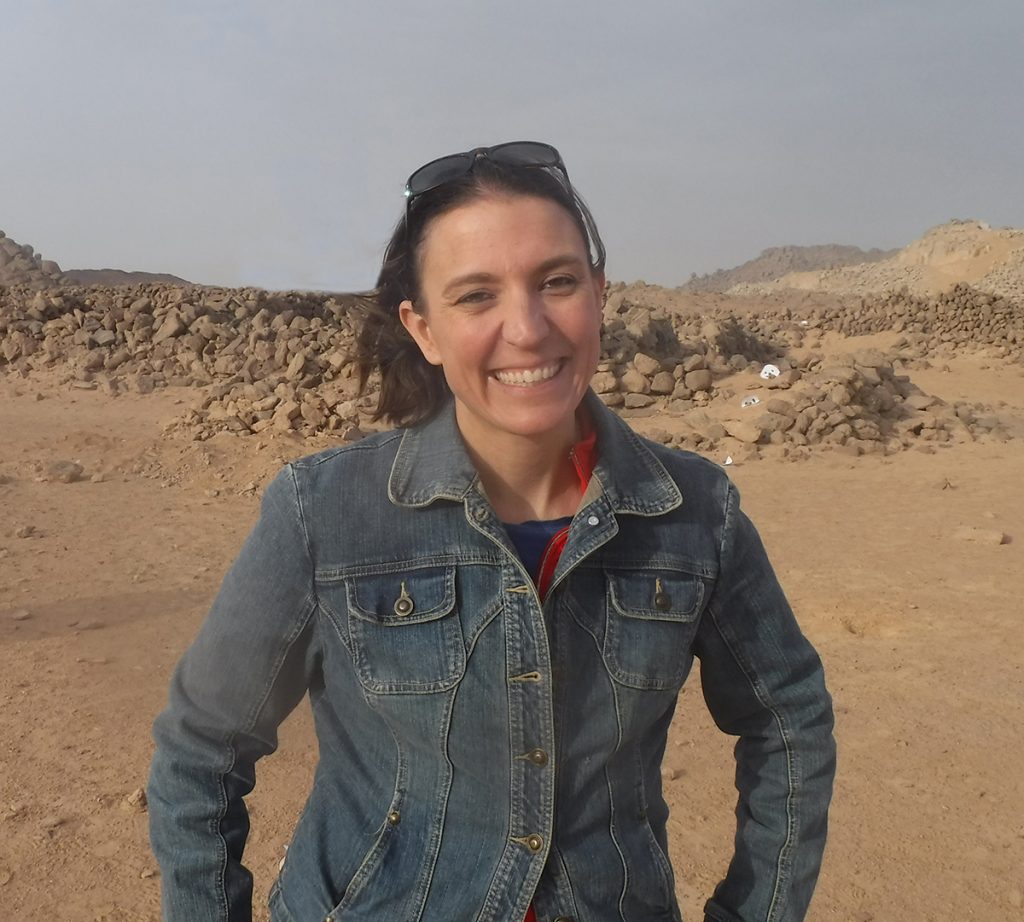 Highlights from an Evening with Sarah Parcak & Josh Gates

On February 2, AIA Trustees Sarah Parcak and Josh Gates joined guests in Los Angeles to speak about their shared passion for archaeological discovery and exploration. Parcak is a professor at the University of Alabama at Birmingham, a National Geographic Society Archaeology Fellow, winner of the 2016 $1 million TED Prize, and founder of GlobalXplorer°. Gates is a member of the Explorers Club and host and co-executive producer of Expedition Unknown (Discovery) and Legendary Locations (Travel Channel).

Despite a rainy evening threatening to keep people home, almost 300 archaeology enthusiasts of all ages from across the United States—and even some from outside the country—attended the lively exchange between Parcak and Gates. The two presenters touched on a variety of topics ranging from their own experiences in the field to the use of technology in archaeology. Both also spoke to the importance of the human story in all its forms and about their efforts to make archaeology more accessible to the public. The event was extremely well received, and the AIA wishes to thank all those who gathered for the evening.

Each year the AIA awards a variety of grants to support archaeological research and site preservation. We are pleased to announce our most recent winners.

This grant was awarded to Brian Martens, Postdoctoral Fellow in the Department of Greek and Roman Art at the Metropolitan Museum of Art. Martens will use a variety of scientific techniques to trace the sources of marble used by sculptors in Roman Athens. This research will allow Martens to reconstruct trade networks and produce a more complete picture of the creation and diffusion of art throughout the Mediterranean basin in the Roman period.

This grant was awarded to A. Khaled Abu Jayyab, Department of Near and Middle Eastern Civilizations, University of Toronto. Abu Jayyab will conduct an archaeological survey in the Middle Kura Valley, in southeastern Georgia’s Gardabani, an area that is relatively unknown in terms of archaeological research. The survey will document sites in the region using a predictive model developed by Abu Jayyab and his team.

Shelton will explore how Mycenaean mortuary practices and ancestor worship were adopted beyond palatial sites throughout the Bronze Age by studying materials recovered from the Bronze Age cemetery at Aidonia, Greece. Gaignerot-Driessen will examine data gathered from tumuli at the Early Iron Age cemetery of Anavlochos in eastern Crete to address the topic of tumuli as emblematic monuments in Homer’s Iliad. The Anavlochos tumuli are especially significant as they are the first Cretan examples of this type of funerary construction.

Kate Liszka, the Benson and Pamela Harer Fellow in Egyptology at California State University, San Bernardino, was awarded a grant for the Wadi el-Hudi Expedition. Since 2014, Liszka’s team has been surveying and excavating ancient fortified settlements and mines in Egypt’s eastern desert. The imminent destruction of the archaeological heritage in the area by new gold mines has forced the team to accelerate the pace of their research. Liszka and her team have developed a technique for groundbased photogrammetric survey using multiple cameras mounted on poles to rapidly finish surveying the standing architecture, rock inscriptions, and other archaeological remains in the area.

This grant was awarded to codirectors Pearce Paul Creasman, Associate Professor in the College of Science at the University of Arizona, and Meghan Elizabeth Strong, Research Associate at the Cleveland Museum of Natural History and Adjunct Assistant Professor at Case Western Reserve University, for their work at the Royal Pyramids at Nuri, Sudan.

Nuri is threatened by encroachment, urbanization, and environmental change. Creasman and Strong plan to implement a preservation strategy that includes constructing a low brick wall around the majority of the site, installing signage in English and Arabic, and building a protective enclosure for the tomb of Queen Yeturow to protect it from the elements. The project will include outreach efforts such as familiarizing local workers with the history of the site, providing organized tours to students and local children, and developing a version of the AIA Guide to Best Practices for Archaeological Tourism specific to Sudan.

A Thank You to Ann Benbow

After five years at the helm of the Archaeological Institute of America (AIA), Ann Benbow is stepping down as Executive Director. Throughout her time at the AIA, Ann has been an inspiring leader. She tackled many of the Institute’s most pressing initiatives, including a forthcoming redesign of the AIA’s website, and forged new relationships with other learned societies while strengthening relationships already in existence. Ann brought her long experience with and unflagging dedication to outreach and education to the forefront of her leadership. She secured funding from federal agencies for International Archaeology Day (IAD), including multiple years of sponsorship from the National Park Service. In addition, under Ann’s guidance, the AIA organized a series of conferences for heritage educators and hosted the first ArchaeoCon, an event where she had the opportunity to share her belief in the importance of archaeology with the public. We sincerely thank Ann for her service, leadership, and vision. She will be greatly missed.

AIA programs and activities presented in “Dispatches from the AIA” are made possible through membership dues and gifts from generous donors. The AIA uses these resources to continue its mission of supporting archaeological research, preserving sites around the world, promoting outreach, and making the world of archaeology accessible through its publications and websites. We urge you to join the AIA and support the Institute’s efforts to understand, protect, and promote our shared cultural heritage at archaeological.org/join.

AIA grants, fellowships, and scholarships support the efforts of researchers and students around the world. Additionally, the AIA acknowledges the achievements and contributions of archaeologists, educators, authors, and others at the Institute’s annual awards ceremony. To be eligible for AIA grants and fellowships, applicants must have been members of the AIA for at least two consecutive years (one year for students) by the application deadline. To learn more about AIA fellowships and grants please visit archaeological.org/grants. Information on AIA awards is available at archaeological.org/awards.