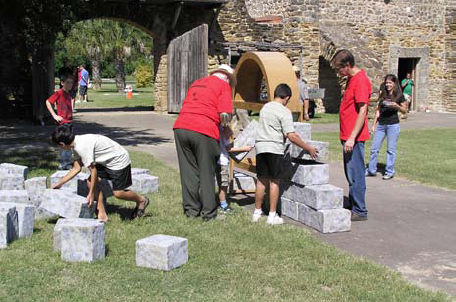 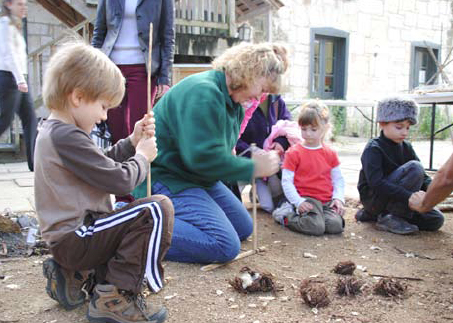 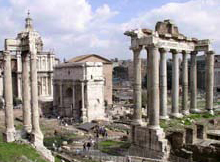 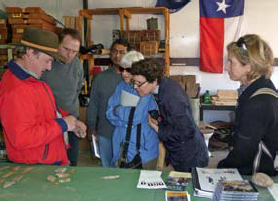 Each year the AIA’s National Lecture Program sends nearly 100 archaeologists around the U.S. and Canada to give approximately 300 lectures to over 100 local societies. There was a time when these lectures were the primary (and often only) outreach efforts made by the societies. But that was in the past. Today, societies are organizing everything from archaeology fairs to movie festivals and are reaching out to people of all ages and interest levels. Society programs have a significant impact in terms of audience attendance and participation—the annual two-day archaeology fair in Boston, for instance, attracts between 4,000 and 5,000 visitors. This new emphasis means that more people have access to archaeological activities and information than ever before.

Specific outreach initiatives are also actively bringing programs to local schools, community centers, libraries, museums, and retirement communities. In an era when the pace of development and change is altering the archaeological landscape at unprecedented rates, it is essential that archaeologists spread the message, to a vast and diverse audience, that the past is important, but fragile, and needs to be protected and preserved. Judging by the success of these programs, clearly the public  is interested.

In an effort to support these fresh efforts, for the last two years the AIA has increased its support for local societies by expanding and enhancing the existing Society Outreach Grant Program. These grants are geared to helping societies organize and host programs and activities for the general public. Last year, almost 20 percent of the societies received some funding from the AIA. Grant winners have been featured in past issues of Dispatches and we will continue to feature them in future issues so that they can share some of the innovative and successful approaches they’ve taken to public outreach.

Import restrictions made throughbilateral agreements between the U.S. and various countries are an important step in restricting the movement of archaeological materials across international borders and serve to discourage looting and the illicit trafficking of cultural heritage. The renewal of the Italian agreement was helped inestimably by the public testimonies offered at hearings of the dangers still faced by Italian cultural patrimony. Public outpouring and the strong and ongoing commitment of both Italy and the U.S. to enrich cultural exchange for the benefit of the public, were surely influential in helping United States Assistant Secretary for Educational and Cultural Affairs, Ann Stock, to take the appropriate steps to renew the import restrictions. The result is, for another five years, through 2016, additional legal protection has been afforded to Italian artifacts and the way has been paved for increased cultural exchange between the U.S. and Italy.

Thank you, again, to the hundreds of AIA members who responded to our call to action. To join our next letter writing campaign please sign up for the AIA’s e-Update on our website: archaeological.org/about/eupdate.

In the January/February 2011 issue of Dispatches we featured grant recipient, Gault School of Archaeological Research (GSAR). On January 5, 2011, a group of AIA Site Preservation Committee members, trustees, and staff visited the Gault archaeological site prior to the start of the 112th AIA Annual Meeting in San Antonio, Texas. The Gault archaeological site is an important location for studying the peopling of the Americas. Ongoing year-round fieldwork examines the rich Clovis (13,500 b.c.) and pre-Clovis occupations.

With over two million artifacts excavated at the site so far, the depth and variety of the stone tool assemblage is providing a considerably different look into the lives of North America’s earliest inhabitants. GSAR Executive Director, Clark Wernecke and Educational Coordinator, Nancy Littlefield led the tour. At its conclusion, AIA President, Elizabeth Bartman, commented, “the Gault School of Archaeological Research is making great use of the funds awarded to them by the AIA Site Preservation Committee. They have certainly set a high standard that I hope all our future grant applicants will strive to meet.”

Dr. Donny George Youkhanna, the former General Director of the Iraq Museum in Baghdad who did so much to defend its collections in the wake of the ouster of Saddam Hussein, died while visiting Toronto on March 11. Dr. George was widely credited for his tireless work safeguarding Iraq’s antiquities and for leading the effort to recover artifacts looted from the museum. Following death threats to himself and his family, he immigrated to the United States in 2007, where he received an appointment as Visiting Professor at Stony Brook University. Dr. George was a Lifetime Member of the Archaeological Institute of America and a popular speaker, serving as this year’s Kershaw Lecturer. His most recent AIA presentations were at the Valparaiso and Kansas City Societies. Dr. George was 61 years old.

Political Unrest and the Destruction of Cultural Heritage

While this issue of Dispatches was being prepared, momentous events were unfolding in Egypt and other parts of northern Africa and the Near East. As is often the case in times of national instability and unrest, reports of destruction and looting of archaeological sites appeared in the news and on the Internet. The plundering of cultural heritage in wartime, in a climate of political unrest, and as a follow on to natural disasters, has a long and ugly history. Now, more than ever, it is important for the AIA and those who love archaeology to speak out for the protection of archaeological sites and against the destruction of cultural heritage. Furthermore, we need to remind people that looters are supplying a demand and that stopping that demand will help to stop the looting. While Egypt’s future, in the short term, is a bit uncertain, we hope that the cultural legacy of Egypt will emerge relatively unscathed

n the November/ December 2010 issue of Dispatches we reported on the formation of CHAMP (Cultural Heritage by AIAMilitary Panel). We are pleased to report that CHAMP launched its official website in January 2011 (aiamilitarypanel.org). CHAMP is dedicated to creating awareness among deploying military personnel regarding the culture and history of the local communities that will host them. Education and training of military personnel is a critical step in preserving and safeguarding historical sites and cultural artifacts and will promote greater understanding and improved relations with local communities.

AIA’s Partnership with SAA and SHA

In 2007, the AIA, the Society for American Archaeology (SAA), and the Society for Historical Archaeology (SHA) joined forces to promote the organizations’ educator resources. Working under the name Archaeology Education Clearinghouse (AEC), the three organizations planned several joint ventures the first of which was to showcase and distribute educator resources at the National Council for the Social Studies (NCSS) conferences. The AEC has had a presence at the last four NCSS meetings (2007-2010) and will be at the next one in Washington, D.C. The AEC offers archaeologically themed educational materials to social studies teachers and other educators for use in classroom and interpretive settings. By combining resources, the AIA, SAA, and SHA can now present a more comprehensive list of resources that highlight each organization’s strengths and provide educators with a variety of options. Visit AEC’s website for more information: www.archaeologyeducationclearinghouse.org.

The AIA Annual Meeting is both a time for archaeologists to present and discuss their work and for the Institute to conduct some important business including the election of officers. The results of the 2011 election are listed below.