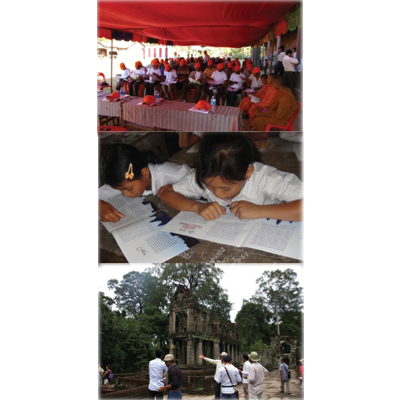 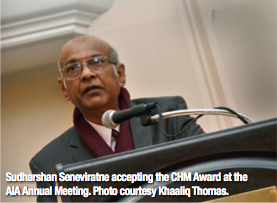 In 2009, the AIA redirected its Site Preservation Program to support preservation projects that combine traditional conservation with outreach efforts, educational initiatives, and community engagement. The first grant awarded under the revised program was to Heritage Watch, a nonprofit organization founded in 2003 by archaeologist Dougald O’Reilly to combat the destruction of archaeological sites in Cambodia. We are happy to announce that Heritage Watch has successfully completed the three-year AIA-funded project.

Heritage Watch’s efforts supplemented a Global Heritage Fund project focused on stone conservation and restoration training at the 12th-century temple complex of Bantaey Chhmar. Representatives of Heritage Watch had noted that looting was rampant at the site and that the local community-based tourism (CBT) organization already in operation in the villages around the temple needed assistance. In response, Heritage Watch proposed a program that included workshops designed to make local community members aware of the need to curb looting and harmful development activities and to enlist them in the long-term preservation of the site. Heritage Watch also planned to provide English language courses and guide training for CBT members to ensure that they were prepared to implement and manage sustainable tourism activities. Special efforts were made to guarantee that local residents would share in the economic and social benefits of any heritage tourism at the site.

Over the three-year period from 2009 to 2012, Heritage Watch imple- mented the workshops, the language training, and the guide training programs—efforts that have had a significant impact on the activities in and around Banteay Chhmar. According to the project’s directors, members of the CBT who participated in the English language training have shown a marked improvement in their language skills and, more importantly, have gained the self-confidence necessary to interact with visiting tourists. The 11 guide trainees who successfully completed Heritage Watch’s training program will receive official certification from the Ministry of Tourism. The certification will distinguish them from other local guides and will enable them to pursue an important career.

Through Heritage Watch’s public outreach efforts, residents from all the villages around Banteay Chhmar have a heightened awareness of the value of preservation. Approximately 250 local residents were involved in the community workshops and program outreach activities. Heritage Watch also created a simplified version of a 300-page scholarly study of Banteay Chmar and its surroundings. The manual is being prepared for publication in English and Khmer and will serve as a continuing aid to the guides and local residents.

The Heritage Watch program exceeded the goals laid out in the original proposal. Although the project is located in a relatively remote area of Cambodia, its effects will be far- reaching, not only throughout the local community but on the provincial and national levels, by providing an appropriate example of the best ways to protect a site. It must be noted that a key to the program’s success was the support that Heritage Watch received from provincial, local, and national authorities. This support was secured early in the project’s implementation through meetings between Heritage Watch and the various Cambodian stakeholders.

Heritage Watch’s program and its accomplishments highlight the need for community engagement and involvement in the planning and execution of sustainable site preservation initiatives. To read about other AIA-supported projects that are making similar significant differences around the world, please visit archaeological. org/sitepreservation.

At the 2013 Annual Meeting in Seattle, the AIA presented the Conservation and Heritage Management Award for excellence in the conservation of archaeological sites and collections to Sudharshan Seneviratne in recognition of his tireless efforts to protect and preserve the archaeological heritage of his native Sri Lanka. Seneviratne’s many accomplishments range from archaeological conservation to advocacy, from education and training to raising cultural awareness in a country that is home to multiple ethnic, religious, and linguistic groups. Seneviratne’s work presents the shared cultural heritage of the Sri Lankan people in a manner that respects and celebrates the island’s cultural diversity while encouraging inclusiveness.

Sri Lanka’s cosmopolitan culture and rich intellectual and spiritual traditions are a testament to the island’s ability to mesh indigenous ideas and practices with influences derived from its long-standing connections to India, China, and West Asia. Excavations on the island have revealed artifacts of Buddhist, Chinese, West Asian, Hindu, Indian, Christian, and Islamic origin. In 1983 the country descended into a 26-year civil war that was finally brought to an end in 2009. Today, Sri Lanka is working hard to leave behind the legacy of war and rebuild both materially and culturally. Seneviratne believes that a shared heritage is the common thread that will bring reconciliation to an island and people torn apart by war. For the past two decades he has undertaken inclusive heritage initiatives at several UNESCO World Heritage sites in Sri Lanka with the dual aims of preserving archaeological treasures and promoting peace.

Seneviratne’s notable accomplishments include his role as archaeological director of the Jetavana Project at Anuradhapura, where he was involved with the conservation of the Jetavana stupa, the largest masonry

structure in Sri Lanka, second in size only to the great pyramids at Giza. Under his direction, the displays in the site’s museum were reorganized to emphasize the multicultural, multireligious, and commercial aspects of the site rather than simply its role as a Buddhist “monastic city.” Conservation and museum work at the site were complemented by a series of programs for schoolchildren and others on the shared heritage of Anuradhapura.

Other ventures include the Kandy Heritage City Cultural Mapping Project, a project to digitally record the heritage monuments of the Buddhist, Hindu, Muslim, Christian, and colonial cultures of that city, a World Heritage site; the creation of the Ethnographic Museum for Plantation Workers of Indian Origin to depict the previously ignored cultural connections between Sri Lanka and India; and the conservation of the Dutch warehouse in the Galle Fort that now serves as the National Maritime Archaeological Museum. Among its displays are reproductions of archaeological objects from

all parts of the island made in the recently established Antiquities Replica Center of the Central Cultural Fund, where young artisans are trained in the traditional arts and crafts of Sri Lanka.

Training and education are important components of Seneviratne’s efforts. As head of the Department of Archaeology at the University of Peradeniya for nearly 10 years, Seneviratne has been instrumental in training the next generation of South Asian archaeologists in areas such as environmental archaeology, settlement archaeology, and ethnoarchaeology. He has held visiting professorships at various institutions including Cornell University, Carleton College, Bowdoin College, Swarthmore College, and is currently at Whitman College for the 2012–2013 academic year.

In recent years Seneviratne has served Sri Lanka as senior advisor (culture) to the Ministry of Foreign Affairs (2004–2007) and as director general of the Central Cultural Fund (2007–2010), the custodian organization for World Heritage sites in Sri Lanka. In that role he spearheaded the creation of new museums to showcase the shared cultural heritage of the Sri Lankan people, as well as the production of new heritage publications in all three national languages (Sinhala, Tamil, and English). Seneviratne’s efforts have helped preserve and highlight Sri Lanka’s rich cultural heritage and emphasize the role that archaeological heritage can play in fostering a sense of community. His work embodies the AIA’s principles of combining archaeological preservation with outreach, education, and community engagement.

How do you make an excellent AIA lecture even better? Serve desserts and treats inspired by the regions and time periods being discussed in the talk! The AIA Local Society in Tucson received an AIA Society Outreach Grant for “Snacktacle”—a project that creates original sweets to accompany AIA lectures. The delectable confections, created by Society member and University of Arizona graduate in history and classics Rosalva Parada, are based on recipes from classical antiquity as well as on scents, spices, and herbs pertinent to the region and time period being discussed in the lecture. Before the lecture, participants and audience members receive handouts that explain the relevance and design of the treats they will be served at the conclusion of the talk. The sweet treats are conversation starters that engender a sense of community through the sharing of food. The Tucson Society plans to develop a booklet with recipes and information on how the project can be adapted and implemented by other AIA Local Societies.

Denver Society for Archaeology and Historic Preservation Month: The Denver Society will cosponsor Colorado Archaeology and Historic Preservation Month (AHPM) in May. Society programs include hosting a table with educational activities and AIA information at the AHPM Pres- ervation Fest and an archaeological open house at The Dry, the site of an early-twentieth century rural African-American homesteading community near Manzanola, Colorado.

Narragansett Society for AIA’s Young Archaeologists Day: The Narragansett Society will launch a pilot program to mentor local high school students interested in archaeology. The program includes an essay contest and a day-long Saturday event at Brown University’s Joukowsky Institute for Archaeology and the Ancient World.

New York Society for The Next Generation Steps Up: The New York Society will print a special issue of their newsletter to publish the papers presented by local graduate students at the Society’s 2012 National Archaeology Day symposium. The newsletter is seen by over 400 members of the Society.

Salem Society for National Archaeology Day Celebration: The Salem Society received funding to provide workshops on archaeological methods, give specialist presentations, provide children’s activities, and host a movie screening for Archaeology Day 2013. As in 2012, the society will once again organize a conversation via Skype with French amateur archaeological organization ArkeoTopia.