HYBRID - Lenapehoking: Archaeology, Heritage, and the Power of Place for Descendant Local Nation 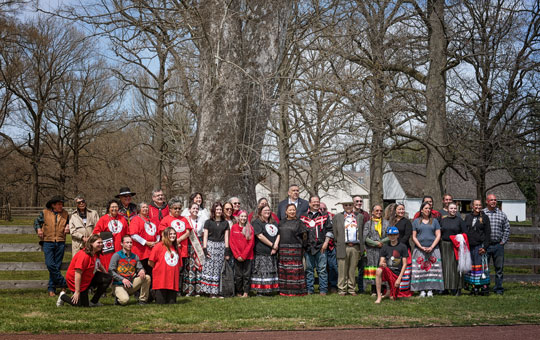 This panel discussion highlights tribal relationships to Lenapehoking, the ancestral and spiritual homeland of the Lenni-Lenape and Delaware peoples of the Delaware Valley. Archaeologists and tribal cultural specialists will bring the site-specific landscape and histories to life, illuminating once-vibrant places that remain important to tribal Nations today.

Jeremy Johnson
(Delaware), Director of Cultural Education, Delaware Tribe of Indians, Oklahoma
Jeremy Johnson is the Cultural Education Director of the Delaware Tribe of Indians based in Bartlesville, Oklahoma. He is Lenape, Absentee Shawnee and Peoria. Before his current role, he served as Assistant Chief of the Delaware Tribe. Jeremy is a lifelong educator who worked for over eighteen years as a middle school and high school English teacher and coach. He is committed to preserving and revitalizing Lenape culture and language for the future generations of his tribe. Jeremy currently resides in Noble, Oklahoma with his wife, Anpetu Luta Wi, and two children, Marian and Jennings.

Curtis Zunigha
(Lenape/Delaware), Co-Founder and Co-Director, The Lenape Center
Curtis Zunigha is an enrolled member of the Delaware Tribe of Indians in Oklahoma. He has over thirty-five years of experience in tribal government and administration, community development, telecommunications, and cultural preservation. He is an acknowledged expert on Delaware/Lenape culture, language, and traditional practices, and is Co-Founder and Co-Director of The Lenape Center, based in New York City. The Lenape Center promotes the history and culture of the Lenape people through the arts, environmental activism, social justice, and agricultural practices. The Lenape Center’s work represents the return of the original Indigenous people to their homeland of Lenapehoking (New York, New Jersey, and Pennsylvania).

Mr. Zunigha is a citizen of the Cherokee Nation of Oklahoma and a veteran of the U.S. Air Force.