CANCELED: The Life and Deeds of Luigi Vassalli: Painter, Patriot and Egyptologist 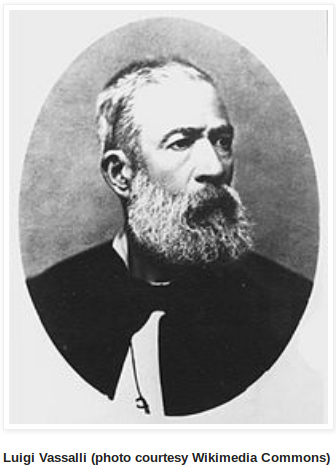 The Northern California ARCE board of directors has decided that because of concerns about the spread of COVID-19, the March 29 ARCE-NC meeting has to be canceled. The $1000 Marie Buttery grant, with a submission deadline of March 15, will be awarded on schedule, but the honoree will receive a check by mail instead of in person.

At this time there are no changes to the ARCE-NC schedule beyond March 29, but stay tuned.

Please pass this information along to anyone who may not receive electronic notifications, and please, be careful.

ARCE-NC Board of Directors

The American Research Center in Egypt, Northern California Chapter, and the Near Eastern Studies Department, University of California, Berkeley, invite you to attend a lecture by Dr. Francesco Tiradritti, Director, Italian Archaeological Mission to Luxor

The Life and Deeds of Luigi Vassalli: Painter, Patriot and Egyptologist

Luigi Vassalli was born in 1812 in Milan. In 1828 he enrolled at the Brera Academy and around this period he joined the Mazzinian activism but after a failed conspiracy he was sentenced to death, only to be pardoned but exiled. He moved in several places across Europe and later he traveled to Egypt where he began working for the local government.

In 1848 Vassalli returned to his homeland to join the revolutionary movements against the Austrian Empire, but after the failure he returned to Egypt where he became a portrait painter and an archaeological guide for wealthy foreigners. Around 1858 he was appointed Inspector of excavations by the French Egyptologist Auguste Mariette, who was Director of Antiquities at this time. Vassalli assisted in excavations at Giza and Saqqara until 1860, when he returned home to give his contribution to the Expedition of the Thousand led by Giuseppe Garibaldi. After the victory he was appointed First Class Conservator at the Naples National Archaeological Museum; however, the office was soon abolished by the still pro-Borbonic museum management and Vassalli again came back to Cairo.

In Egypt he made several archaeological explorations in many sites such as Tanis, Saqqara, Dendera and Edfu from 1861 to 1868. He sent many mummy remains to the Museo Civico di Storia Naturale of Milan and in 1871 he made around 150 casts from monuments exhibited in the Bulaq Museum which he brought to Florence with him. During his short stay here the Italian government asked him to inspect many Egyptian collections in Italy, after which he returned to his duties in Cairo.

Still in 1871, along with Mariette he discovered the mastaba of Nefermaat at Meidum, which is well known for the famous scene commonly referred as the “Meidum geese”. Vassalli carefully removed the whole scene from the tomb wall and reassembled it inside the Bulaq Museum. This fact sparked a controversy over a century later in 2015, when the Egyptologist Francesco Tiradritti suggested that the Meidum geese scene is a 19th-century forgery possibly made by Vassalli himself, a claim disputed by Egyptian authorities, among them Zahi Hawass.

After Mariette’s death in 1881, Vassalli became interim director until the installation of Gaston Maspero. He retired in 1884 and returned to Milan and then to Rome, where he committed suicide on June 13, 1887.

Francesco Tiradritti was born in Montepulciano, Italy, on August 17th, 1961. He is currently Director of the Italian Archaeological Mission to Luxor, where he is working in the Funerary Complex of Harwa (TT 37) and Akhimenru (TT 404) and the Tomb of Pabasa (TT 279). He received his PhD at the University of Rome “La Sapienza” with a doctoral thesis on the Propaganda on Royal Stelae of the XX Dynasty. He also obtained a D.E.A. at the University La Sorbonne in Paris.

Dr. Tiradritti has taken part in excavations in Italy, in the Sudan and at a several sites in Egypt – including the Tomb of Sheshonq (TT 27) and at Gebelein. He has worked for many years as consulting Egyptologist at the Civiche Raccolte Archeologiche of Milan. Additionally he has taught Egyptology in Enna, Naples, Foggia, Turin and at the University of Ljubljana in Slovenia. In 2004-2005 Dr. Tiradritti occupied the Dorothy K. Hohenberg Chair of Excellence in History of Art at the University of Memphis in Memphis, Tennessee. In 2013 he was scholar at the Getty Research Institute. He has been a member of the commission for the feasibility study of the Grand Egyptian Museum at Giza and for the renovation project of the Egyptian Museum in Turin. He has organized and worked on more than twenty exhibitions on various aspects of ancient Egyptian civilization in Italy, Hungary, Slovenia, Spain, Switzerland, Czech Republic and in Egypt.

He is the author of Ancient Egypt: Art, Architecture and History, published in 2002 in Italian, English, Spanish, & Chinese, and Egyptian Wall Paintings, published in 2008 in Italian, French, German, & English. Dr. Tiradritti is also the editor of Egyptian Treasures from the Egyptian Museum of Cairo, published in 1999 and translated into thirteen languages between 1998 and 2000. He has authored several scientific publications on Egyptology and Sudanese archaeology, and regularly writes for “The Art Newspaper” and “Archeologia Viva”.

Dr. Triadritti’s research focuses primarily on a semantic approach to archaeology, history of art and the culture of ancient Egypt.

Parking is available in U.C. lots after 5 p.m. on weekdays and all day on weekends for a fee. Ticket dispensing machines accept either $5 bills or $1 bills, and debit or credit cards. The Underhill lot can be entered from Channing Way off College Avenue. Parking is also available in lots along Bancroft, and on the circle drive in front of the Valley Life Sciences building.

A map of the campus is available online at http://www.berkeley.edu/map/
For more information about Egyptology events, go to http://www.facebook.com/NorthernCaliforniaARCE or https://www.arce-nc.org.