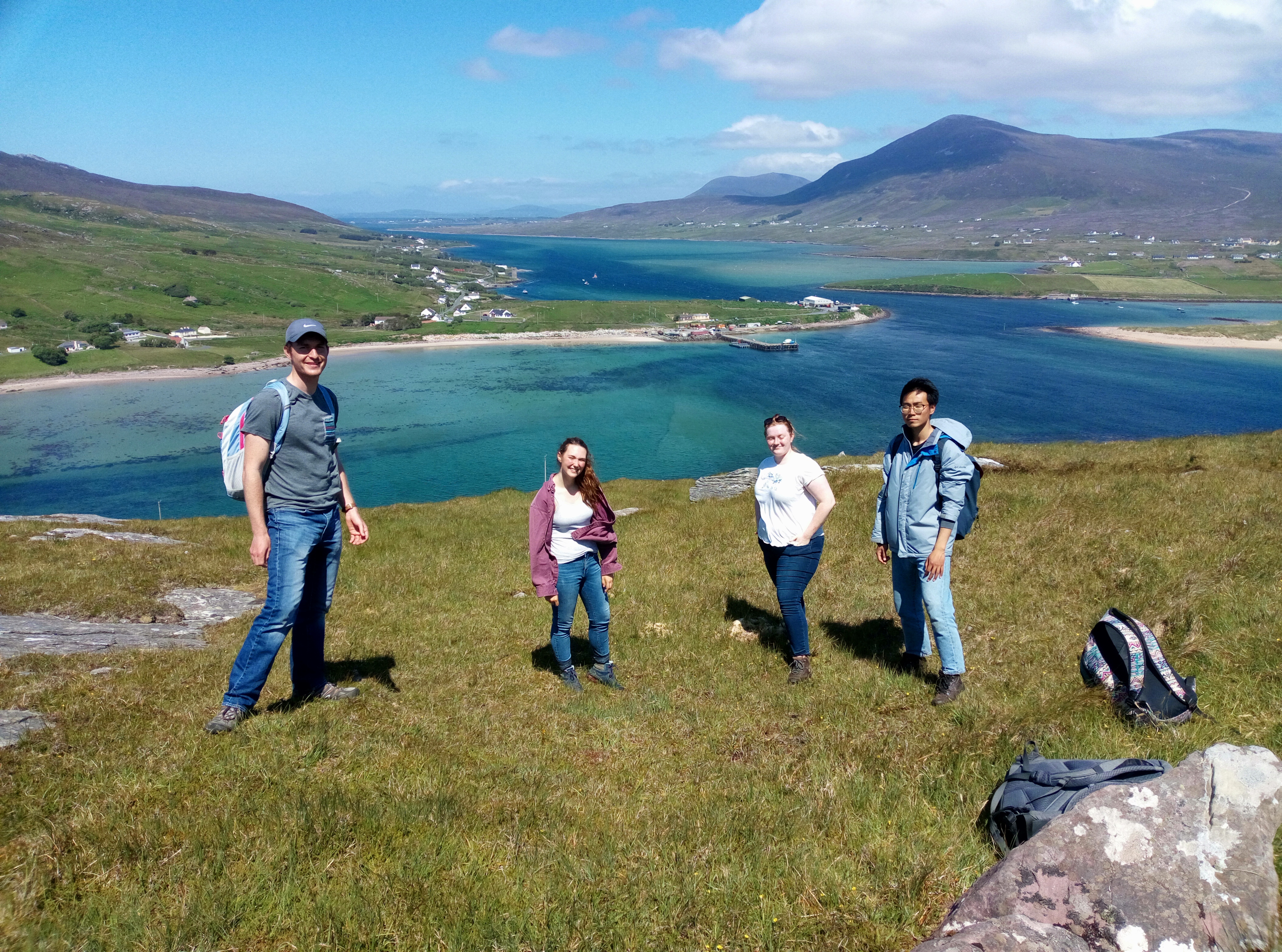 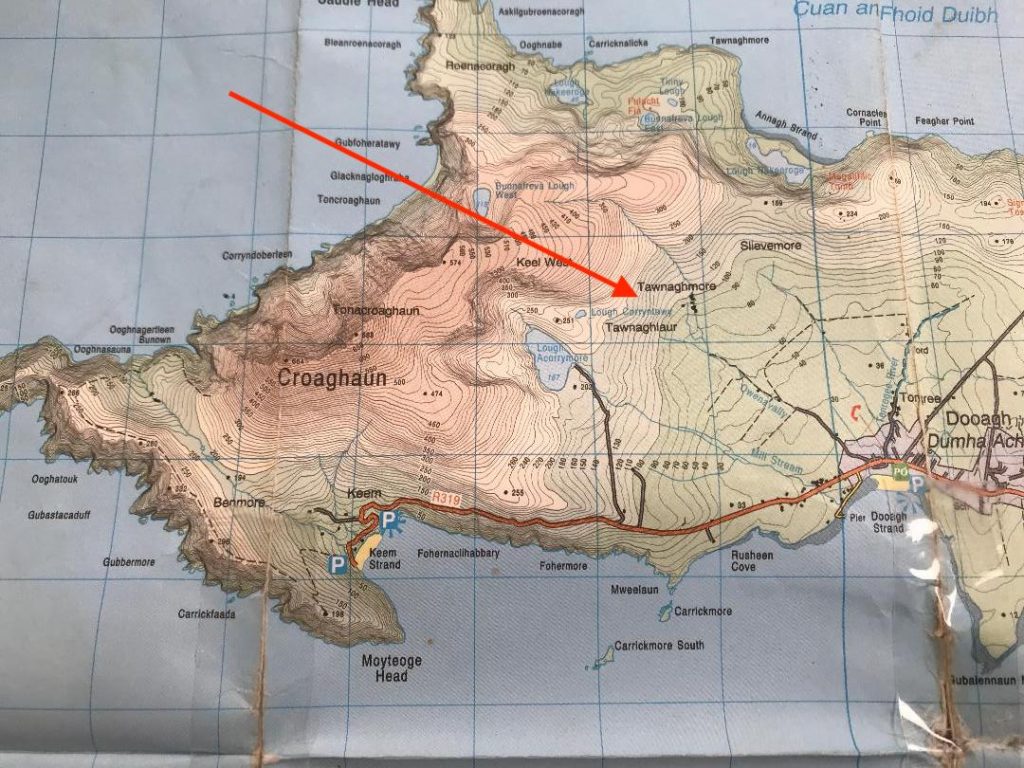 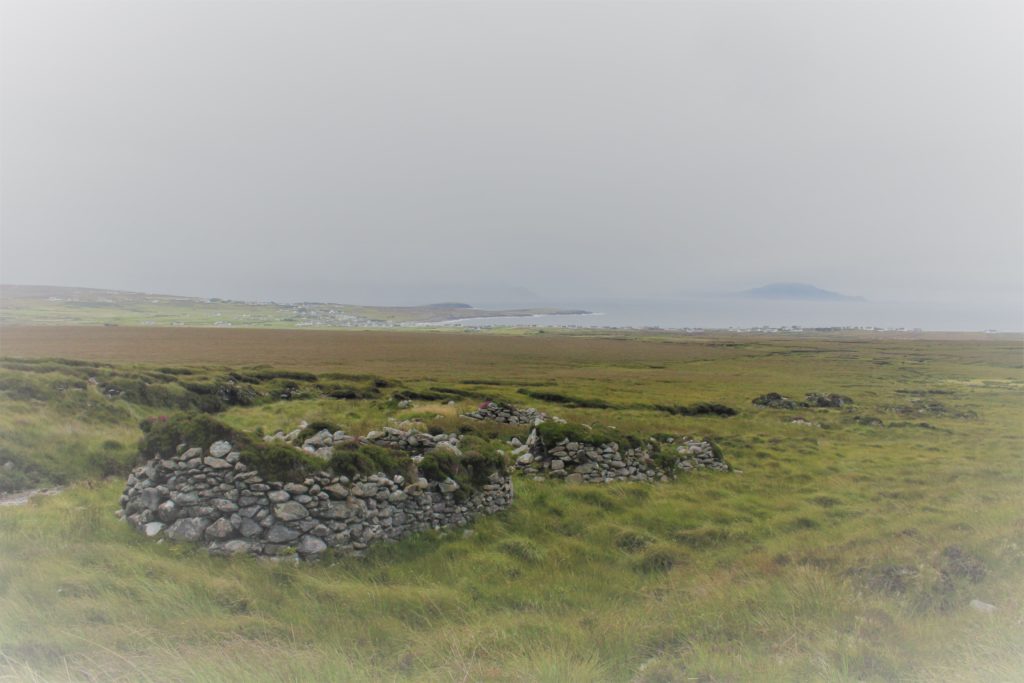 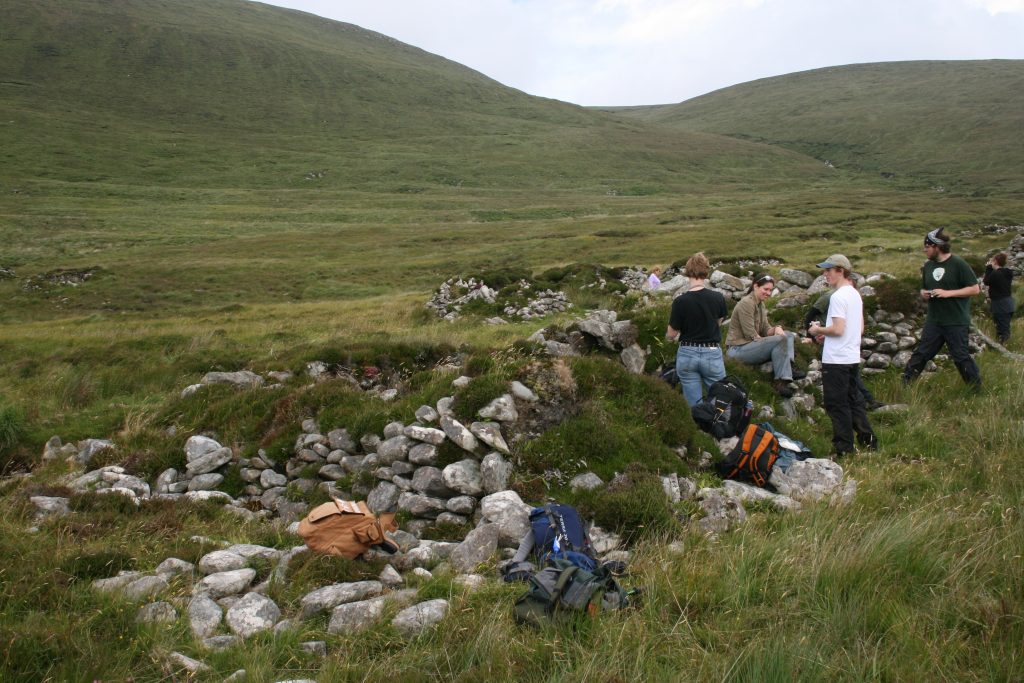 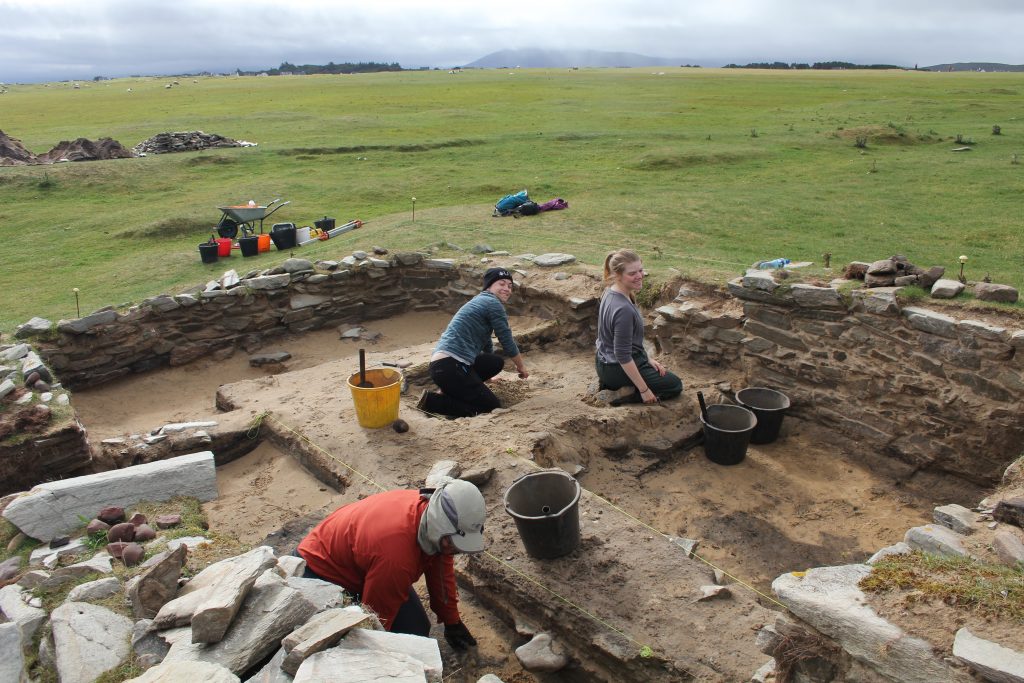 In 2023 the primary focus of this year’s work will be the excavation of one drystone house and the recently found enclosure and house at Tawnaghmore (great meadow), a small enigmatic settlement, which probably dates to the late/post medieval period. Tawnaghmore is a nucleated settlement of 16 unplanned houses running in a linear fashion over 170m of ground at an elevation of 97m asl. The site is located on ground sloping gently south-eastwards, along the left and right banks of the Abhainabhaile River, which flows in a south easterly direction and enters the sea at Dooagh. Access to Tawnaghmore from Dooagh is along the banks of the Abhainabhaile River, following a bog road, a narrow grass-covered track and a glacial ridge to reach the site. There is no visible road/track into the settlement. To the north east is a grass and bog covered linear settlement with an unknown number of houses called Caislean which may suggest the presence of a Cathair in this area sometime in the remote past. A pollen core taken in 2005 indicated the presence of a deciduous forest in this area during the mid to late Neolithic (Caseldine, C. 2005, 169-178). The settlement appears of maps dated to 1809 and 1838 but little is known about its period of occupation or abandonment. The houses are relatively large, have some unusual features and are sub-rectangular in shape.

Notes:
Nineteen house foundations are visible at Tawnaghmore (Tamhnach Mor) /Tawnaghlaur today, roughly the same number as are shown on the 1837 Ordnance Survey map but seven more than that depicted on Bald’s 1809-1817 map. A Survey by McDonald in 1983 show a total of nineteen houses, thirteen to the west side of the stream that flows through the site, five on the east side and one at the confluence of two streams. The buildings are well constructed in dry stone and display an interesting mixture of rectangular, sub-rectangular with rounded corners and oval plans. They are around 8m in length and 4.5m in width, although there is some minor variation. Doorways are set in the eastern façade and all face to the east. Many survive to a decent height. The date of the settlement is not known but a date in the late seventeenth century or early eighteenth century seems likely. In 2022, a large enclosure, with the remains of a house and cultivation ridges was discovered SW of the main settlement and this, together with one other house in the main settlement will be the focus of research in 2023.

Experience Required: None. Beginners particularly welcome, as are mature students. 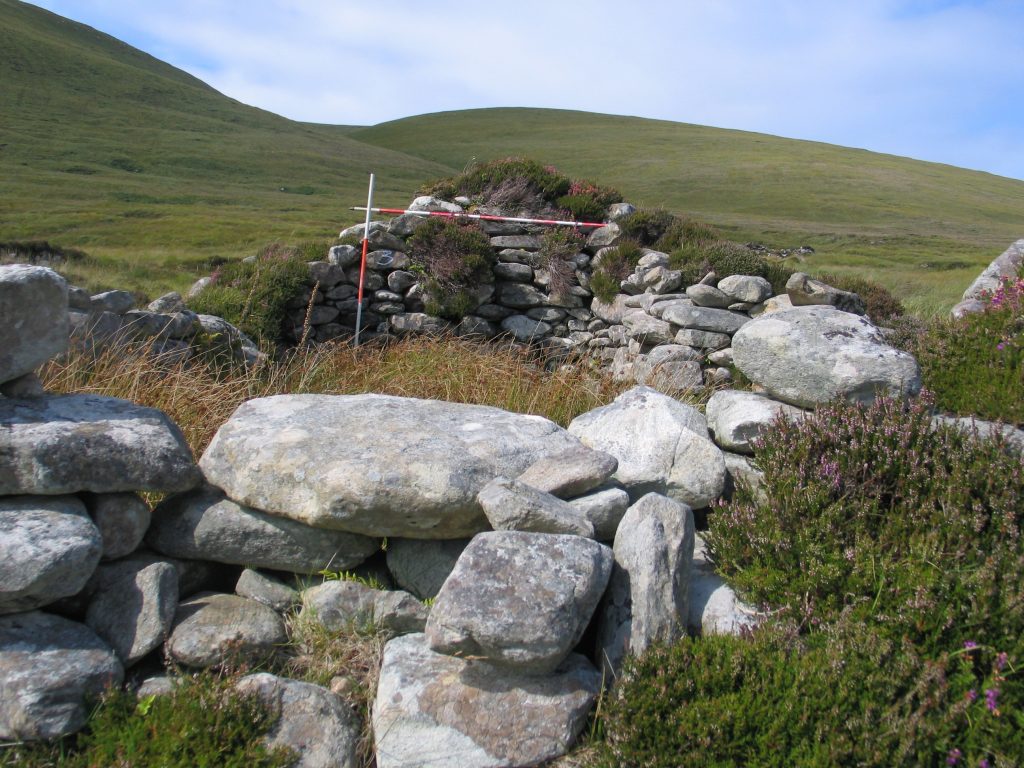 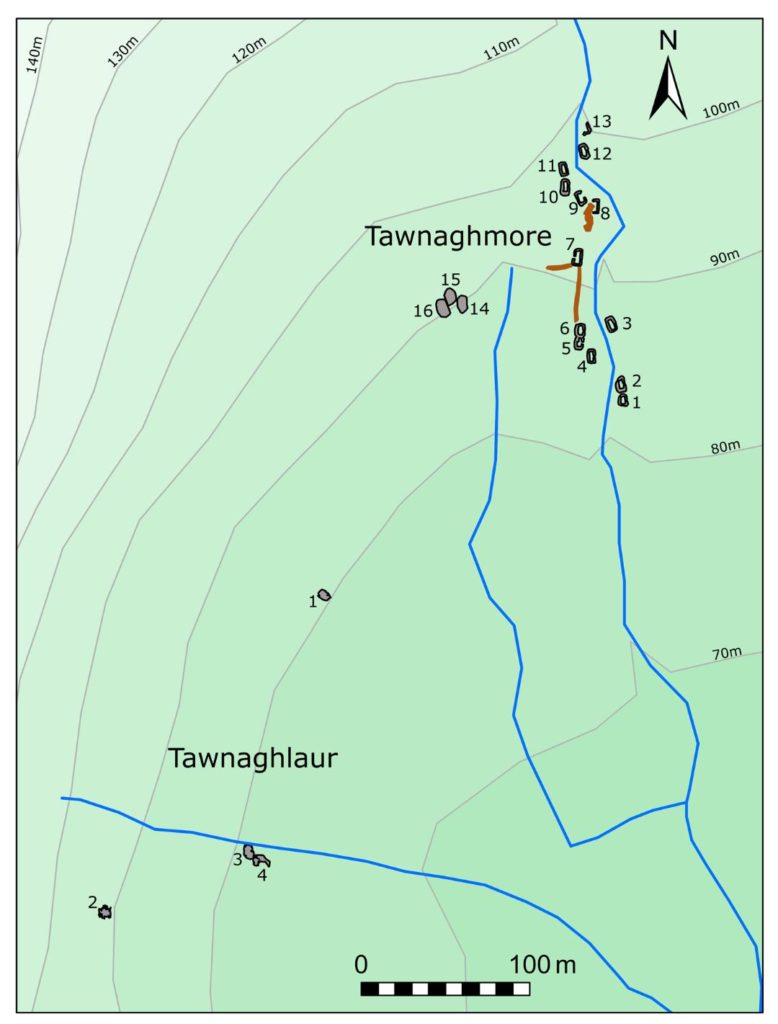