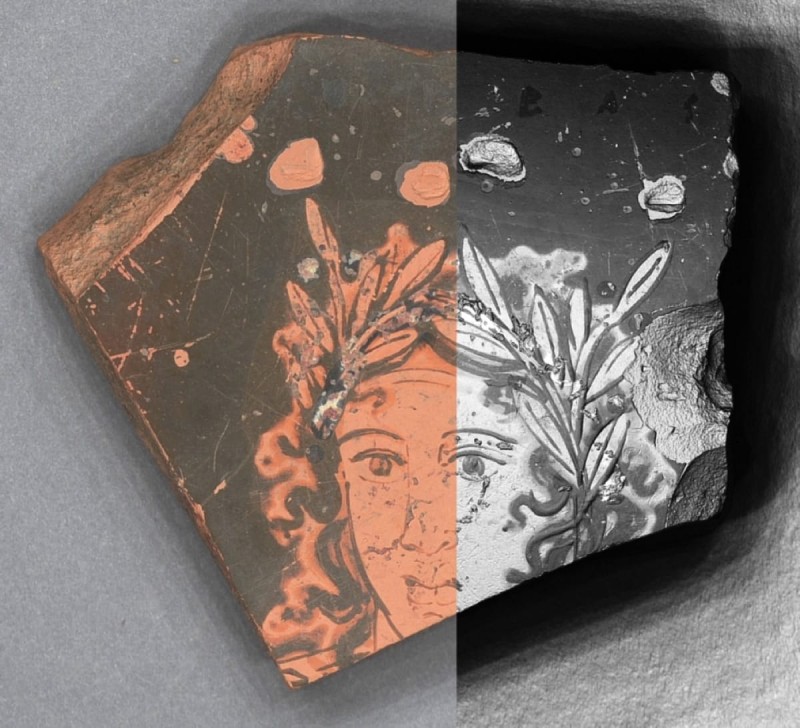 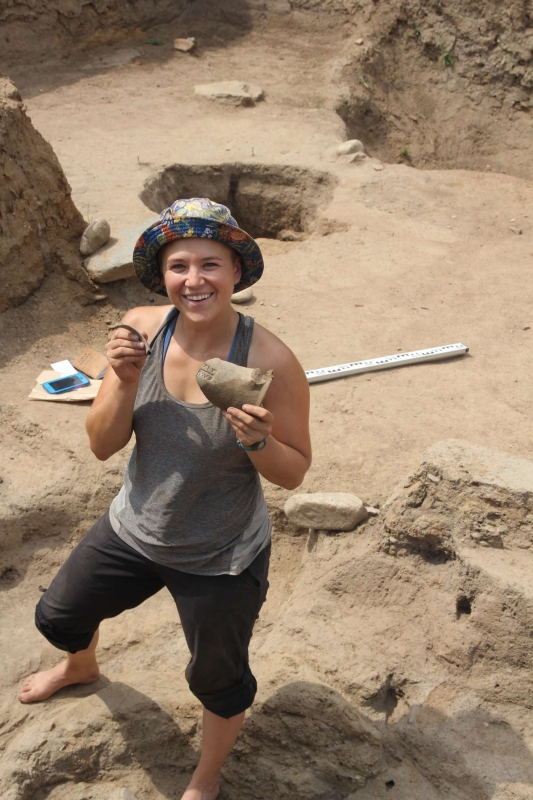 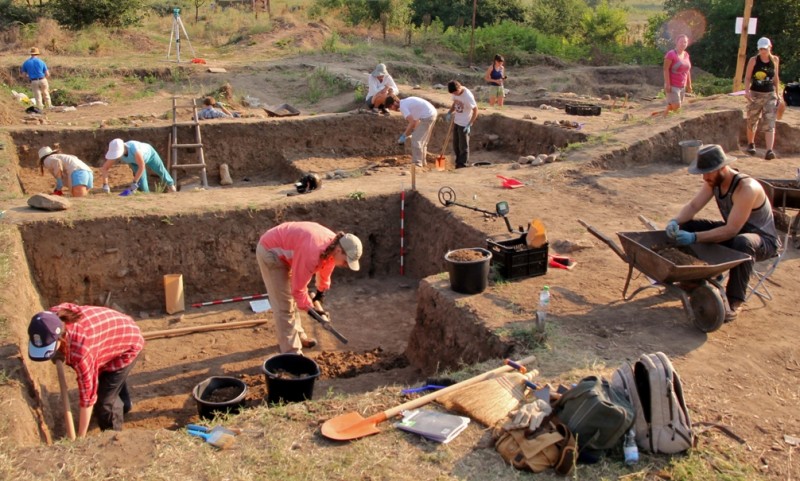 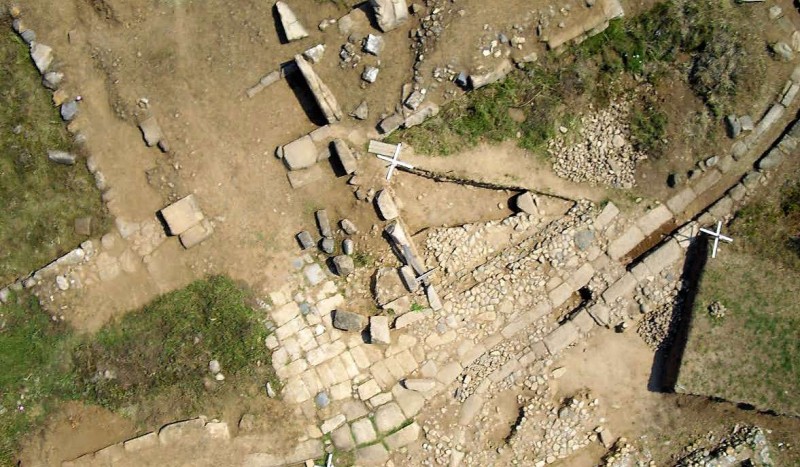 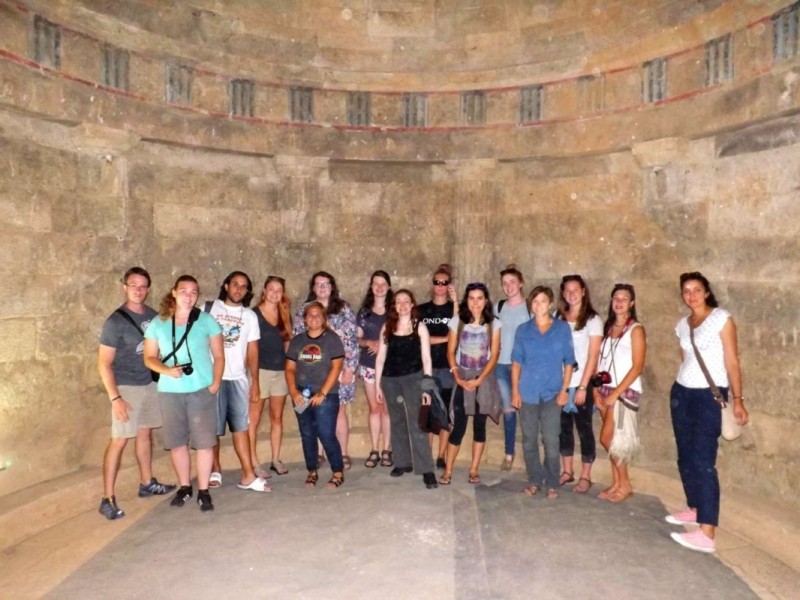 The ruins of an Ancient Greek trade center (emporion) in the heart of Thrace – on the left bank of Maritsa River (ancient Hebros), between the towns of Vetren and Septemvri, were discovered by Prof. M. Domaradzki in 1988. He started regular excavations and in 1990, his team found a stone inscription (known as “Vetren inscription”) that helped the scholars identify the site as the Ancient Greek emporion named Pistiros. Merchants from the Greek coastal cities of Maroneia, Thassos and Apollonia lived and traded there with their Thracian neighbors under the supreme protection of the Thracian Odrysian kings (the biggest and mightiest Thracian Kingdom at that time). Up to the moment, Pistiros is the only certainly identified emporion in the heart of Thrace. That is why excavation of the site is a significant source of information for the political, economical and cultural history of the Odrysian kingdom and Thrace in this period.

The emporion was also a major metallurgical center and a key harbor for the export of metals and metal products from Thrace to Greece in the Classical and Early Hellenistic periods (from the middle of the 5th to the beginning of the 3rd century BCE). The trade contacts of the emporion are evident through finds of numerous imports such as Attic red-figured and black-slip pottery, amphorae (mainly Thassian) and coins (e.g. several hoards of copper, silver and gold coins found during the excavations – they represent the coinage of different Odrysian kings (e.g. Amatokos I, Bergaios, Kotys I, Amatokos II, Teres II, Kersebleptes, Teres II), Greek cities (Thassos, Maroneia, Parion, Thracian Chersonese, Enos, Apollonia, Messabria, etc.) and Macedonian rulers (Philip II, Alexander the Great, Kassandros, Demetrios Poliokretes, Lysimachos, etc.).

Most of the ancient authors and the majority of modern scholars consider the cult of Dionysos rooted in Thrace. Apparently, it played a very important role in the emporion’s religious life. For instance, the Vetren inscription informs about the oath taken in the name of Dionysos by the Odrysian king: Kotys I (383-359 BCE) and his successor from the citizens of Pistiros – this is how they guaranteed the integrity of their lives, properties and activities in their town under the sovereignty of the Thracian kings.

​So far, archaeologists have uncovered the eastern fortification wall of the emporion (having one gate, a tower, and a bastion – all built of stone blocks analogically to the Thassian fortification system), streets paved by stone plates, solid stone foundations of two buildings as well as an efficient drainage system. Buildings of different types are indicating at least two different chronological horizons of the site’s existence. The investigation of their characteristic features and shapes, as well as the emporion’s planning, are among the major research questions concerning Pistiros, together with the following others:

The Balkan Heritage Field School at the site of Pistiros started in 2013. To date, the students have worked in the southeastern sector which is an area next to the fortification wall where two chronologically different building horizons were identified.

In the earlier one, the area was covered with simple half dug-in houses, presumably dated in the very first period of the site’s existence – the end of the 5th BCE.

The architectural remains from the second horizon belong to buildings made of wooden beams, wattle and daub, and existed in the period between the second half of 4th and beginning of 3rd BCE. Characteristic for this time period are clay escharae (fireplaces) of rectangular or oval shape. A huge amount of local and imported Greek vessels, cult figurines, Greek and Thracian coins, weapons, etc. were among the artifacts discovered in the last five years.

The participants in 2022 in Ancient Greeks in the Land of Dionysos – Excavation of Emporion Pistiros will be included in the further excavation of the same sector.

Notes:
Archaeological field techniques and methods for excavation and documentation; Ancient Greek and Thracian archaeology in the light of their trade and religious interaction at the site; RTI (Reflectance Transformation Imaging) documentation of Late Classical and Hellenistic finds, excursions to significant heritage sites in Thrace, Bulgaria.

Experience Required: No experience is required. However, the project is not recommended for individuals with solar allergies or other special illnesses that might be exacerbated during intensive outdoor activities. A valid COVID-19 certificate is required.

Room and Board Arrangements:
Accommodation*: Villa Velis, Karabunar, Bulgaria - in comfortable rooms with two to three beds (bathrooms with shower and WC), equipped with a/c and TV in a local newly built hotel. The hotel has a small swimming pool and SPA, free of charge for the participants in the field school. There are cheap laundry services and free Wi-Fi is provided. Extra night - 30 EUR (per night per person), Single room - 200 EUR (for two-week period). *Subject to change. May be substituted with similar level accommodation. Meals: Three meals (fresh, organic Bulgarian homemade food) per day are covered by the reimbursement payment and usually take place in the hotel’s restaurant. Requests for vegetarian food are accepted. Brown-bag lunches during the excursions and days off. Participants must pay on their own for extra days and for single room accommodation as well as for extra meals, beverages, services and products!