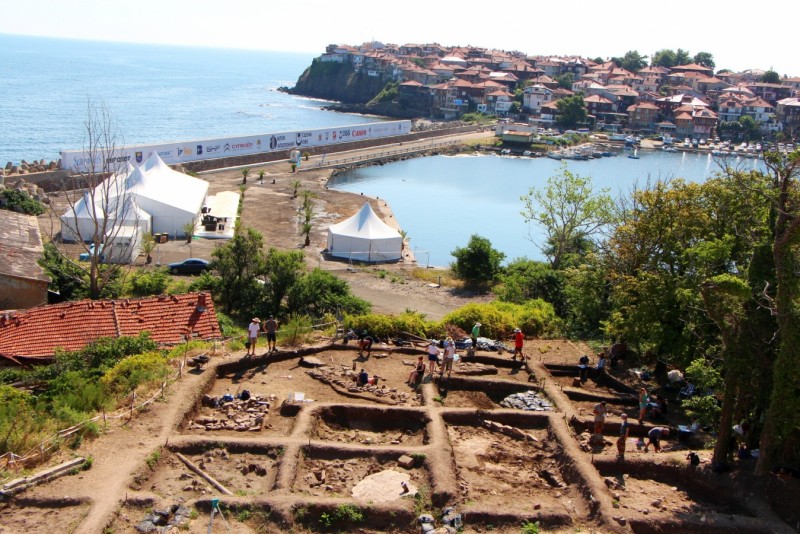 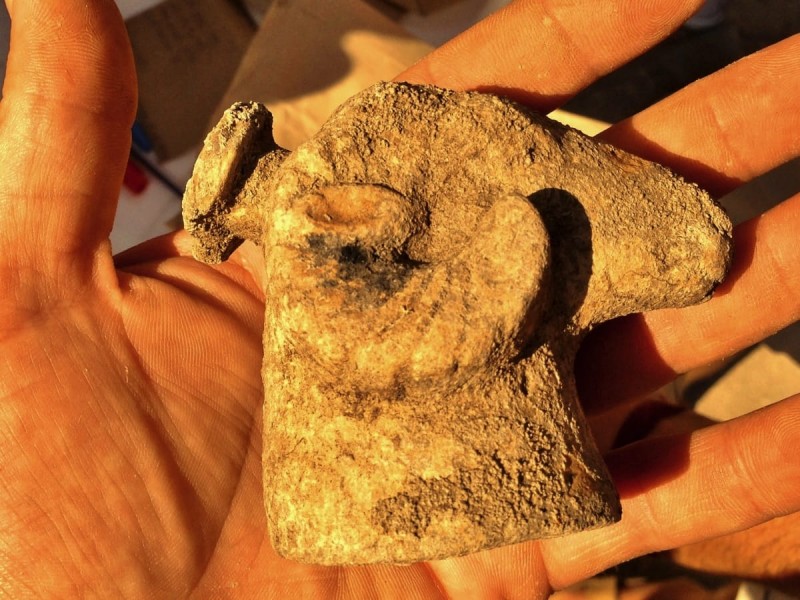 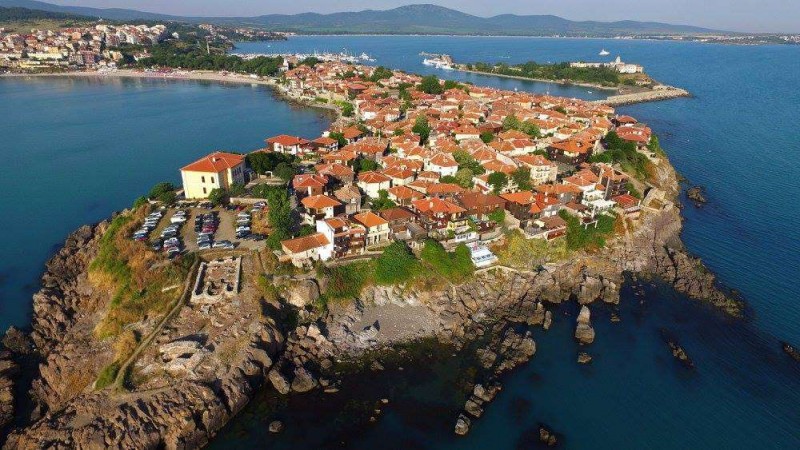 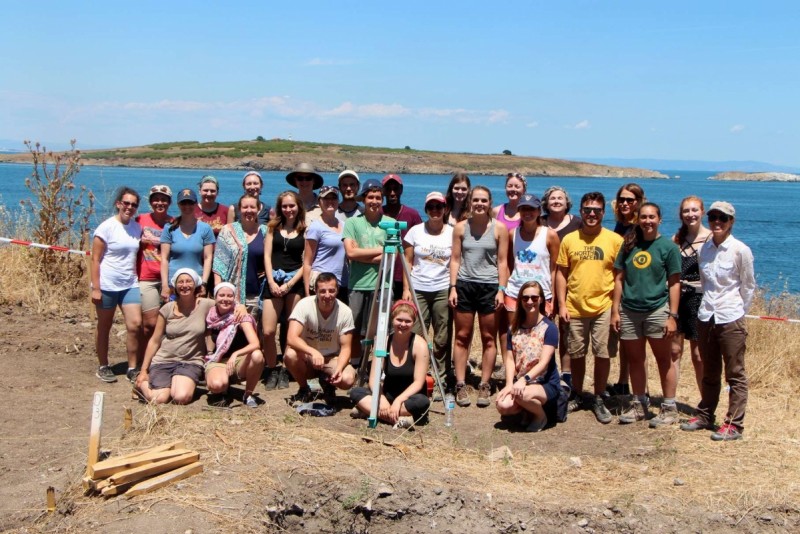 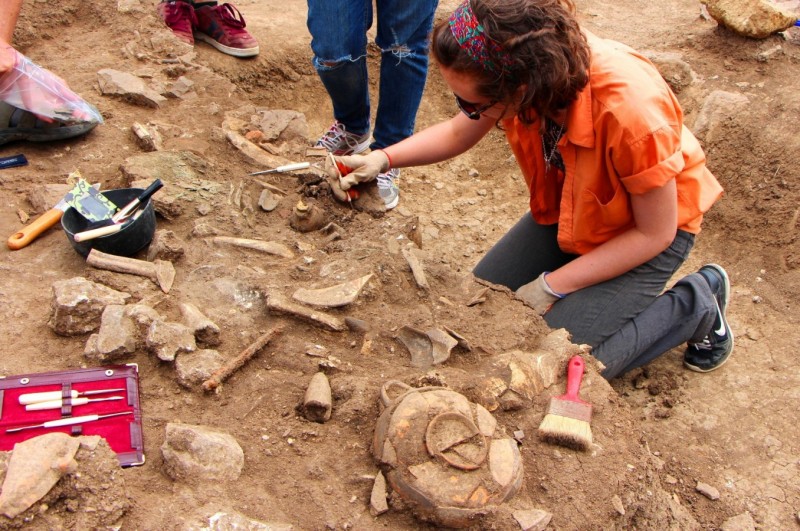 Discount for AIA members: 5% discount off the regular admission fee (for applying directly through BHFS)

The archaeological field school takes place in the Bulgarian summer resort Sozopol, ancient Apollonia Pontica, which was one of the earliest towns on the western Black Sea Coast. The city, founded by Milesian colonists at the end of 7th century BCE, was named Apollonia Pontica in honor of the patron deity of Miletus, Apollo. Despite being one of the largest and richest Ancient Greek colonies in the Black Sea region, Apollonia Pontica was famous in Antiquity because of the colossal statue of Apollo made by the celebrated Greek sculptor Calamis. Epigraphic sources mention that the temple of Apollo was situated on an island, identified by most of the scholars with St. Kirik Island – the closest one to the ancient city, where the field school excavations take place. However, until recently there was no archaeological evidence suggesting where the temple was situated. During the Balkan Heritage Field School excavations in 2013, a fragment of East Greek pottery with inscription – dedication to Apollo was found, what is important evidence about the location of the temple. In 2014 the artifact was exhibited in the Louvre, France, along with other precious artifacts representing the Bulgarian archaeological heritage.

The archaeologists and the Balkan Heritage students have discovered there:

The great discovery convinced the Bulgarian Government to declare the island a cultural heritage site and designate some of the abandoned military buildings to be turned into a Museum of the Maritime Contacts and Civilizations.

This field school provides a unique glimpse into the early stages of the Greek Colonization of the western Black Sea Coast and the development of a small Greek settlement to one of the richest and strongest Greek colonies in the Black Sea region, as well as an amazing opportunity to:

The Field School Season envisions excavations at the top of the island, in the area of the Archaic and Classical Greek and Hellenistic temples, Ancient Greek copper foundry and the Early Christian basilica and necropolis, where the excavations have been taking place since 2012. The discoveries from the last seasons were quite exciting and included:

There are three application/enrollment paths for this field school:

1. All students at universities/colleges outside Europe seeking academic credit units must apply through the Institute for Field Research (IFR), USA. Click here to apply.

2. All students at universities/colleges in Europe seeking ECTS academic credit units must apply through the Balkan Heritage Field School. Click here to apply.

Notes:
Major field school topics/activities: Archaeology and history of the Greek colonization and culture along the Western Black Sea Coast; Excavations of the Archaic Greek settlement and the sacred precinct (temenos) from Archaic, Classical and Hellenistic period of Apollonia Pontica; Archaeological field techniques and methods for excavation and documentation; Processing of finds and samples; Excursions to significant heritage sites in Bulgaria. Academic credits are available for students through NBU, Bulgaria and Connecticut College, USA.

Experience Required: No experience required. However, the project is not recommended for individuals with solar allergies or other special illnesses that might be exacerbated during the intensive outdoor activities.

Room and Board Arrangements:
Accommodation: Accommodation is at VMK Military Club or nearby guest houses which have comfortable rooms with two to three beds, equipped with a/c, refrigerators, TV. The hotel is located close to the town beaches, the Old Town Quarter, the Archaeological Museum and within a 15 min walk of the archaeological site. Wifi is available in the lobby area of the hotel. Staying an extra day costs 25 EUR. Single rooms are available upon request for an additional fee of 120 EUR per week. Alternative more luxurious accommodation (single, double or triple rooms) is available for an additional fee of 120 to 180 EUR per week upon request at Villa Kera. Places are limited. For those who prefer higher class accommodation, the BHFS would recommend participants make reservations with the following hotels in Sozopol: Hotel Casa del Mare and Hotel Fiesta. All participants who organize and pay extra for their own accommodation will receive a discount of 75 EUR (per week) off the admission fee. Participants must pay on their own for extra days and for single room accommodation! Meals: Daily breakfast and the official welcome and the farewell dinners are covered by the admission fee. Students are responsible for their own lunch and dinners. Sozopol offers variety of restaurants that can meet everyone’s preferences and dietary requirements – from fast food options to cozy gourmet restaurants. The average meal price (soup/salad, main dish and dessert) can cost between 6 to 12 USD. The project team will recommend restaurants for different preferences (cuisine, cost, dietary needs) and will arrange discounts for the students.