This listing expired on May 30, 2022. Please contact georgedoudalis@hotmail.com; lfkaiser88@gmail.com for any updated information. 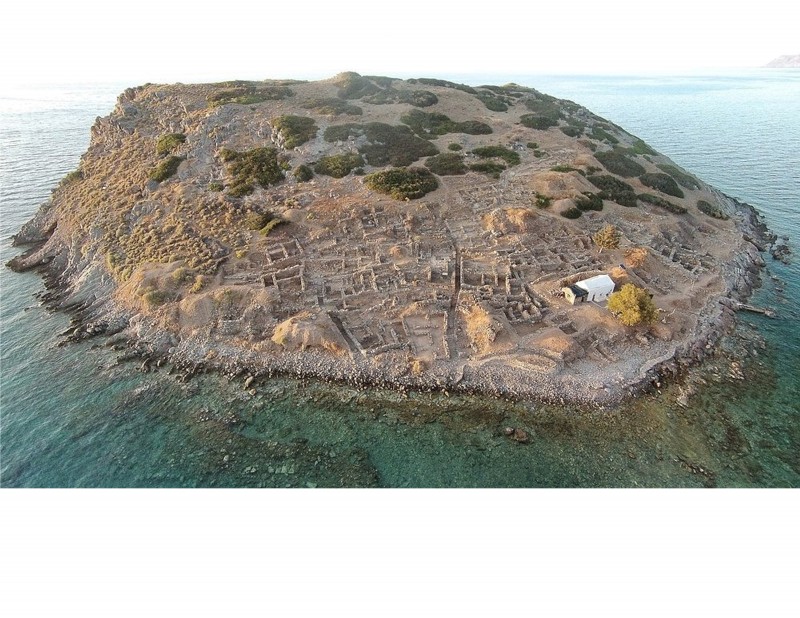 Applications for volunteers who wish to join the project in the summer of 2022 have closed. The project is now fully staffed. Thank you all who applied and stay in touch; we are always seeking colleagues with expertise in archaeological sciences who might contribute to the study and publication of our finds.

The Greek-American Excavation at Mochlos, Crete, has received a two year permit from the American School of Classical Studies in Athens to resume excavations in 2021 and 2022. It anticipates final approval from the Greek Ministry of Culture for 2022 and has scheduled the project to begin June 6 – assuming that Greece is open for business and the Covid-19 pandemic is under control. The season will run for ten weeks with an eight week period of active excavation.

The project has uncovered a Minoan town of the Neopalatial period, c. 1700-1430 BC, earlier remains from the Protopalatial period, c. 1900-1700 BC, and later 7th and 5th century remains on the summit of the island. It has been in the field since 1989, has published seven volumes to date, and completed work on two more. The goal of the 2021-2022 seasons is to complete excavation of three areas that we have already partially excavated in order to continue with their final publication. We are looking for volunteers to work on site, assisting trench supervisors, and others to assist with the processing of pottery and other finds in the INSTAP Study Center in Pacheia Ammos.

The three areas include areas that we have partly explored in the past, so we know that each has the potential to produce major discoveries. They include a well-preserved Middle Minoan building, the only one on the site (Pls. 1, 2), that will be the focus of the 2022 season.

Pl. 2
Another building, identified as C.9 (Pl. 3), is located alongside two specialist workshops and appears to be linked to them in some way. The workshops, which we have already excavated, are large-scale operations with full-time artisans producing high prestige goods that have a transcendent function in the political and religious life of Minoan society (like the Mochlos sistrum or ivory pyxis) and may be what are sometimes referred to as “retainer workshops,” i.e. those working for an elite person or government institution. Because of its unusual architecture and proximity to these workshops, we suspect the building has an administrative function and belongs to such a patron or overseer. In this case, there should be someone keeping records of what was being produced, as there was for the Zakros workshops which had an attached archive, so if we are correct C.9 might also contain Linear A tablets. A large dump behind the building was removed in 2021 and an extension at the northeast corner of the building was exposed that will be explored in 2022.

Pl. 3
The third area takes us out of the Bronze Age into the early Archaic period of the 7th century B.C. when renewed contact with the Near East and Egypt began a transformation of Greek society that was to culminate in the emergence of the polis. Natalia Vogeikoff-Brogan has uncovered several structures of this period on the summit of the island, including an oikos with a hearth, where imported Milesian wine amphoras and high-quality Corinthian pottery were located (Pl. 4). Natalia will continue the excavation of these buildings, which extend to the north, in an attempt to discover more about the people who lived in this area and what happened to them when the area was abandoned in the 6th century.

Pl. 4
Applications have closed for the 2022 season. All participants will be required to have been vaccinated against the Covid-19 virus in advance.

Notes:
The Neopalatial town at Mochlos, dating c. 1700-1430 BCE, was an important trading and manufacturing center in the Late Minoan period, but it was also the location of a number of shrines that made it a center of pilgrimage. The site's ritual focus appears to have continued in the 7th century BC when an oikos house was erected on its summit.

Room and Board Arrangements:
All members of the Mochlos team are provided with rooms in Mochlos, but volunteers must arrange for their own travel expenses and meals in the local tavernas.  Cost: $250.00 (non-refundable deposit for new volunteers to hold your place on the project and pay your membership fees at the ASCSA and INSTAPSCEC); $0 for returning volunteers.