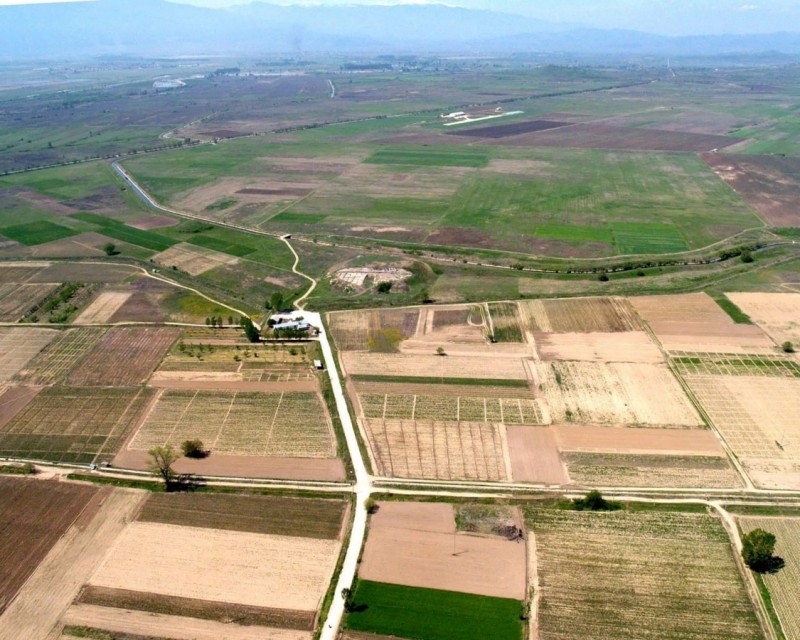 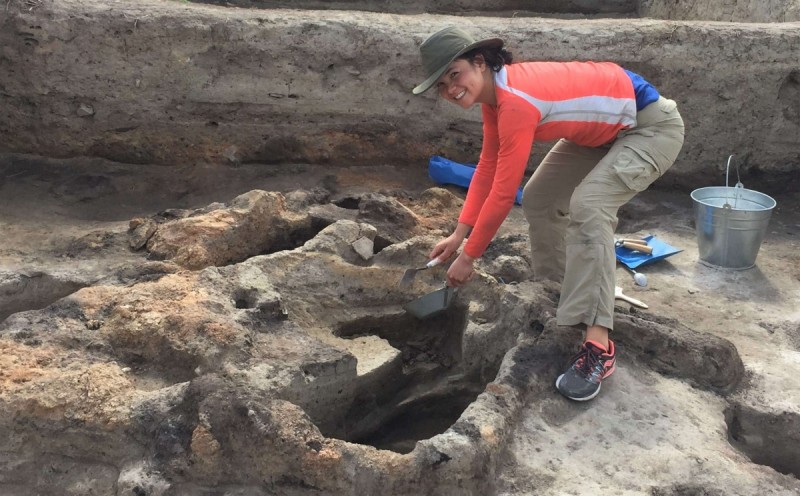 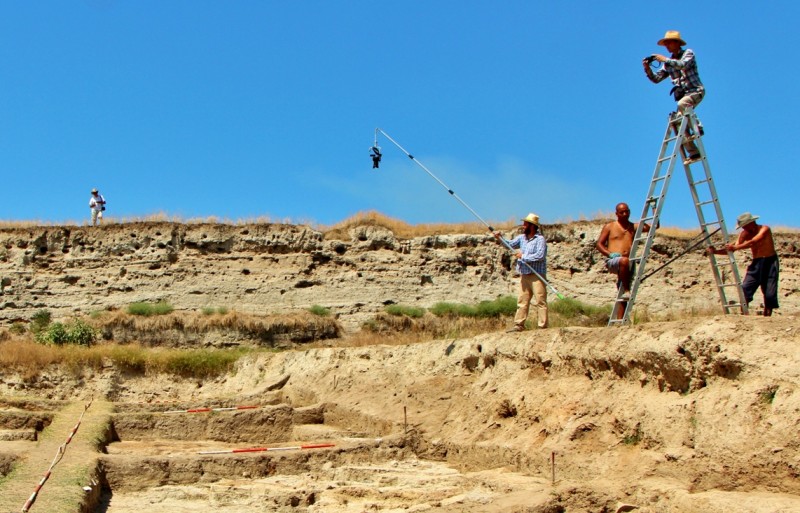 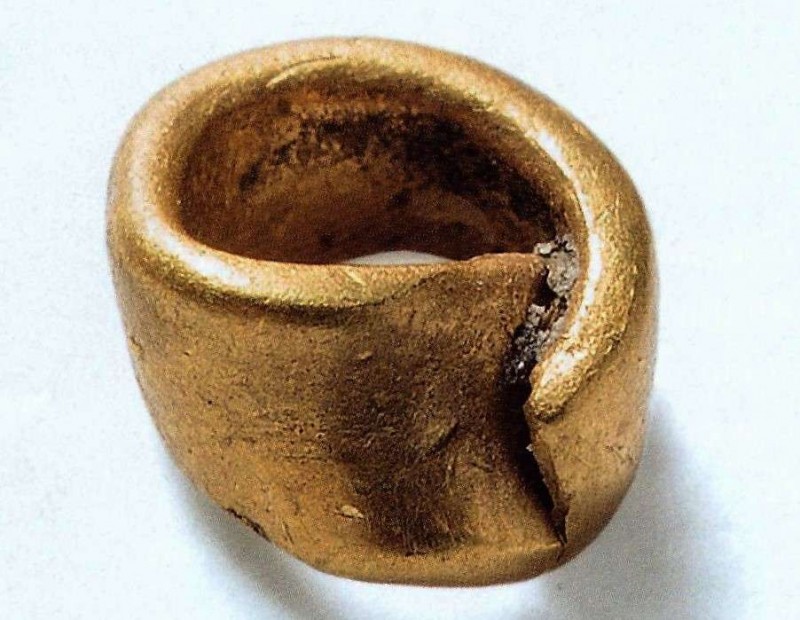 During the 7th and 6th millennia BCE, the Balkan Peninsula was a gateway through which farming, animal husbandry and Neolithization spread from Anatolia and the Near East to Europe. This new population gradually settled down and got familiar with the surrounding region, suitable agricultural areas, raw sources and so on. In the 6th millennium BCE their economy, social organization, trade and cultural contacts evolved, to reach their peak in the 5th millennium BCE. In the beginning of the 5th millennium the earliest metallurgy in European and global prehistory (the processing of copper and soon after, gold) appeared in the Balkans. Thus, this period is known as Copper age, Chalcolithic, Eneolithic or Final Neolithic.

The continuative inhabitance of the same suitable places during these millennia led to the formation of a settlement phenomenon, characteristic of the Near Eastern and Balkan prehistory – the multilayered tell-sites.

Tell Yunatsite is located near the modern village of Yunatsite in Southern Bulgaria. It is among the biggest tells in Europe with a diameter of approximately 110 m/360 ft and height of 12 m/39 ft above the modern surface. Tell Yunatsite was first excavated in 1939 by the Bulgarian archaeologist Vasil Mikov. In 1976, regular excavations were restarted and have continued on an annual basis. Subsequently, research at Tell Yunatsite has grown into an important research program under the National Institute of Archaeology and Museum, Bulgarian Academy of Sciences. At times, Greek and Soviet archaeologists have joined the research at the site and today this is an international research effort directed by Bulgarian scholars. The field school will be held for seventh year and is a joint cooperation between Balkan Heritage Foundation (BHF), the Regional Museum of History in Pazardzhik, the Tell Yunatsite Excavation Team from the National Institute of Archaeology and Museum, Bulgarian Academy of Sciences and the Institute for Field Research.

To date, approximately one third of the tell has been excavated. This work yielded rich collections of archaeological materials, and the sterile soil has not yet been reached. There is a medieval cemetery at the top of the tell, followed by a Roman period level, two Iron Age levels, another dated to the Early Bronze Age, and finally a Chalcolithic/Final Neolithic level. It is unknown if the cultural history of the tell begins in the Chalcolithic/Final Neolithic period or whether older Neolithic occupation layers exist.

The archaeological field school takes place at the Tell Yunatsite lowest excavated layer, which corresponds to the time of Europe’s first prehistoric civilization in the 5th millennium BCE. The intense study of these very first complex societies in Europe began 40 years ago with the excavation of the Varna Copper Age necropolis. That excavation was the first to demonstrate the rise of social complexity in the region. It is during this time that metal processing became widespread and it is the earliest dates for such transformative technological innovation. Data suggest that it is the world’s earliest mass production of both copper and gold (the world’s oldest gold treasure was found in the Varna Copper age necropolis), the first urban settlements in Europe, distinct social and political stratification, and pictograms and characters interpreted by some scholars as the world’s oldest script (as on the Gradeshnitsa tablet, for instance). The area of this civilization stretches from Anatolia across the Balkans to the Carpathian basin and the steppes of Eastern Europe. It collapsed around the end of the 5th millennium BCE under the pressure of drastic social and demographic changes, which were presumably caused mainly by climate change but were exacerbated by foreign invasions.

Recent excavations at Tell Yunatsite indicate that the Chalcolithic/Final Neolithic period settlement covered an area far larger than the tell itself and consisted of uptown (acropolis?) and a downtown district. The uptown section was surrounded by a five meter wide clay wall and a broad and deep ditch. Buildings in this part were placed closed to each other, creating an almost unbroken urban fabric. The Chalcolithic/Final Neolithic settlement experienced a violent event at ca. 4,200-4,100 BCE. Evidence suggests deliberate destruction by outsiders. Many skeletons of children, elderly men, and women were found scattered on floors, suggesting a massive massacre. Those who survived returned and resettled at the Tell, but soon even they left. At that point, Tell Yunatsite and the area around it were abandoned for more than 1,000 years. During this time, a sterile layer accumulated over the last Chalcolithic/Final Neolithic layer.

Excavations in the last years shed new light on the stratigraphy and development of the Chalcolithic/Final Neolithic, and brought new interesting discoveries. Among them are a golden bead and a golden amulet, which are among the earliest golden artifacts in the world.

The aim of the project is to provide participants with a theoretical background on the development of Neolithic cultures in Southeastern Europe with a focus on Final Neolithic/Chalcolithic, Europe’s first civilization, and with practical experience in excavating a complex prehistoric tell-site.

This field school provides a unique glimpse into the rise and fall of arguably the earliest European civilization. In 2023, field school students will take part in further excavation of the burned Final Neolithic/Chalcolithic layer buildings. Faculty and students will work together and explore why and how did one of the earliest proto urban centers in Europe emerge in the beginning of the 5th millennium BCE, and what are the reasons that caused its collapse 800 years later.

Experience Required: No previous experience is required for applicants for Session 1 and/or 3. However, applicants for Session 2 are expected to have at least two weeks of archaeological field experience prior to their participation in this session. A medical COVID-19 certificate might be requested from each participant. The participants should have medical insurance including COVID-19 treatment and repatriation. The participants should inform the project staff about any health issues, allergies, and food preferences.

Room and Board Arrangements:
Accommodation*: In comfortable rooms with two to three beds (bathrooms with shower and WC, TV, a/c and free Wi-Fi) at the Hotel Primavera. The hotel is located in the central pedestrian and shopping area of Pazardzhik, very close to everything that the town can offer to tourists (shops, pharmacies, banks, markets, taverns, restaurants, bars, hospitals, cafes, post offices, tourist attractions, parks etc.). Participants are not expected to bring any additional equipment, bed linens or towels. Single rooms are available upon request for the supplement of 150 EUR per week. Staying an extra day at the hotel costs 40 EUR (per night per person). *Subject to change. May be substituted with similar level accommodation. Meals: Three meals (organic Bulgarian homemade food) per day are covered by the reimbursement payment. During the workdays, all meals usually take place at the site. The meals during the weekends (except the brown-bag lunches during the excursions) take place at the hotel’s restaurant. This field school can accommodate vegetarians, vegans, and individuals with lactose intolerance. Kosher and gluten-free diets are impossible to accommodate in this location. Participants must pay on their own for extra days and for single room accommodation as well as for extra meals, beverages, services and products.