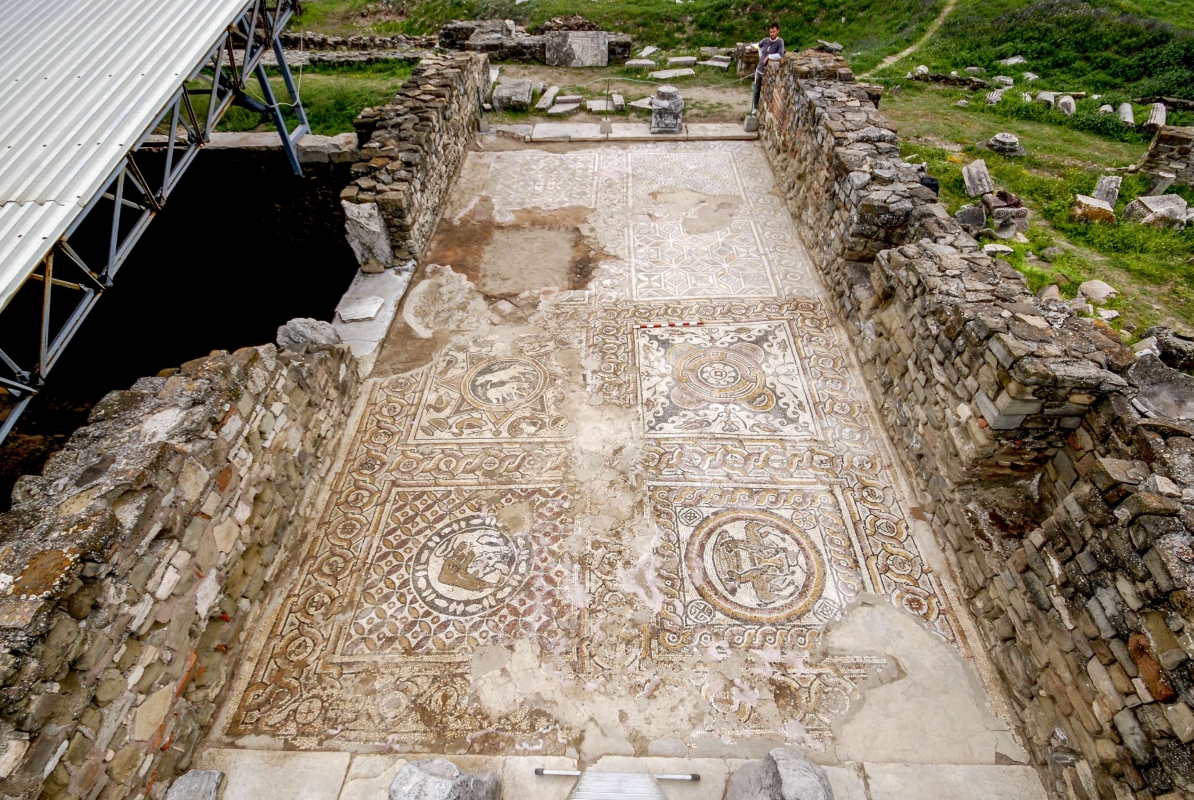 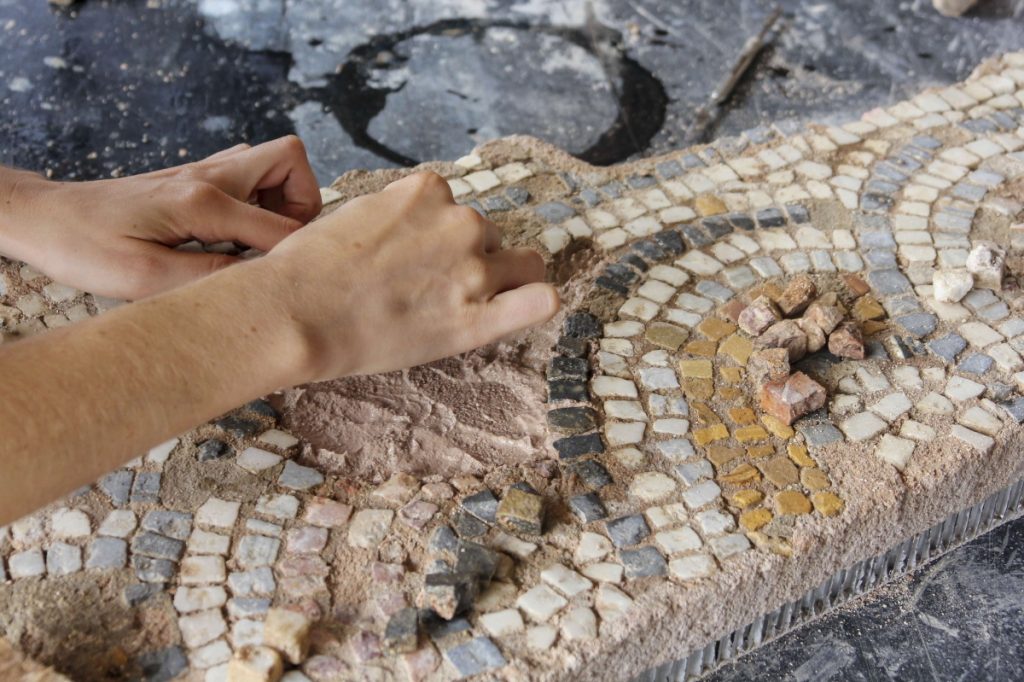 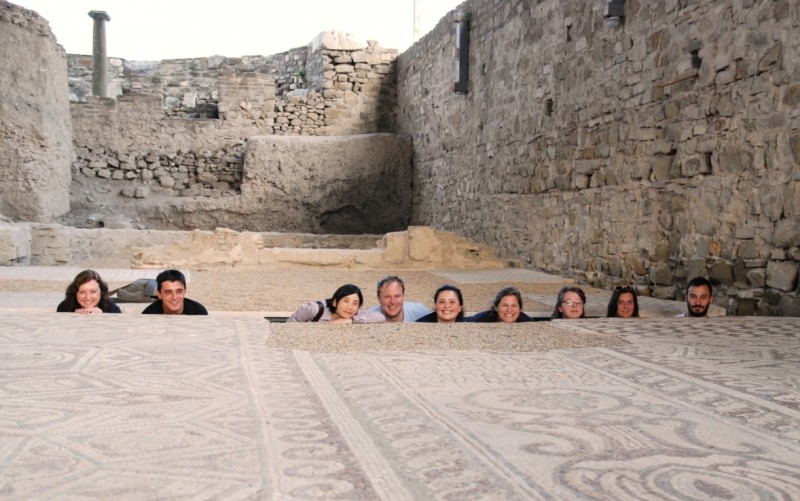 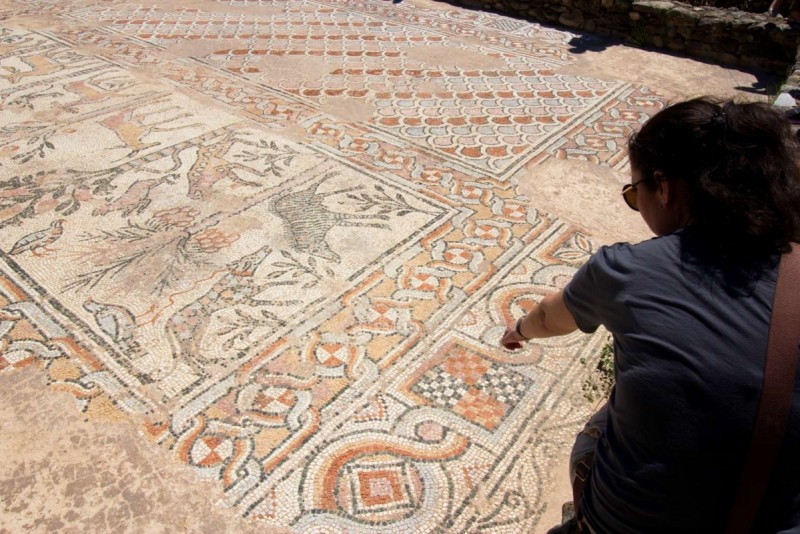 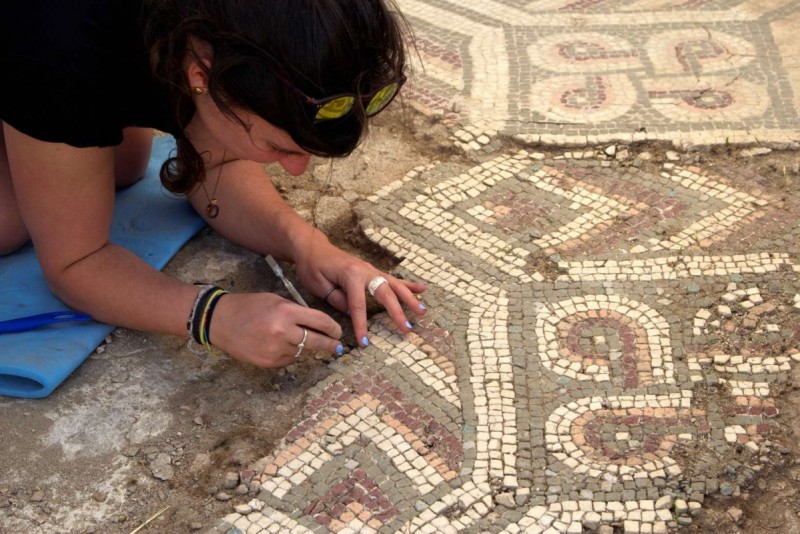 In 2022, the field school project will again be hosted by the National Institution Stobi, R. of North Macedonia at the Roman city of Stobi (today an archaeological park). It provides a unique opportunity for students and volunteers to gain comprehensive knowledge and hands-on experience in the conservation of authentic  Roman and Late Roman Mosaic floors from the ancient city of Stobi.

During the workshop participants will be guided through the consequent stages of study, conservation and documentation as well as the history and technology of Roman and Late Roman mosaics.

The project includes three modules: practical work in documentation and conservation of mosaics; lectures on their history and conservation as well as excursions to the town of Bitola, the archaeological site of Heraclea Lyncestis, Ohrid and Ohrid Lake (UNESCO World Heritage Site) and the ancient Macedonian capitals in Pella and Vergina (UNESCO World Heritage Site), Greece. Refer to the Course Program and Agenda.

Why Stobi? The first historic records to mention Stobi are by the Roman historian Titus Livy (ca. 197 BCE). According to Livy, Stobi became an important center for salt trading after the Roman conquests of Macedonia and the establishment of Pax Romana. In 69 CE, Emperor Vespasian granted Stobi the rank of municipium and the right to mint its own coins. Stobi was not only an important salt trading center but also strategically located at the crossroads of the ancient roads that ran along the two rivers Axios and Erigon. The first road connected the North and the South of the Balkans as it does today, while the second to the southwest connected Stobi with Via Egnatia near Heraclea Lyncestis and to the northeast, it continued to Serdica.

This commercial and strategic position brought Stobi long-term prosperity, especially in the period between the 1st and 3rd centuries CE. Several monumental buildings in the city are dated to this period: the Theatre, the first City Wall, Porta Heraclea, Public Building with Arches (most likely the Stobi library), Casa Romana, the Synagogue, as well as the water supply system. In 267 CE the city suffered Goths and Heruli raids. At the end of the 3rd century, Stobi was devastated by an earthquake, later rebuilt, but following a different urban plan. Most of the ruins visible today belong to buildings dated to this period.

In the 4th century CE, Stobi became an important Christian center and the seat of powerful bishops. In the 5th– 6th centuries, Stobi was the capital city of the Roman province Macedonia Secunda, but suffered from the raids of Huns, Ostrogoths, Avars and Slavs. The constant threat of barbarian raids, as well as certain climatic changes, led to the gradual abandonment of the city in the second half of the 6th century CE. Some records mention a small Slav community that settled and lived there in later centuries. The last historical reference regarding Stobi describes the victory of the Byzantine troops over Stobi’s local militia during the 11th century CE.

Approximately 1560 square meters of the excavated territory of the ancient city of Stobi are covered either entirely or partly in preserved mosaics, dated mostly between the 2nd and 6th century CE. Most of them were discovered in the public or residential Roman and Late Roman buildings at the site: the Episcopal Basilica, the Extramural Basilica, the Theodosian Palace, the Synagogue II, the “Casino”, the House of Peristeria and the House of Polycharmos. Variations of geometric, floral and animal motifs are represented in the most popular ancient mosaic techniques: opus tesselatum, opus sectile as well as opus barbaricum and opus vermiculatum.

A project for conservation of the baptisterium of the Episcopal Basilica funded by The U.S. Ambassadors Fund for Cultural Heritage Preservation was successfully finalized in 2018.

In 2018-2019 the conservation activities during the workshop were focused on the mosaic floor in Room 1 of the House of Parthenius. The first conservation treatment of this mosaic was performed in the 1930s and until 2018, the mosaic was covered with sand, and never properly documented. The condition of this mosaic was extremely bad: layer detachments, degraded nucleus, bulges, depressions, cracks, lacunae, missing and detached tesserae all over the surface, dirt layer deposits, incrustations, different problems caused by vegetation and insects, deteriorated infills of lacunae and edge repairs, etc., thus giving the opportunity to the participants to see and solve almost every kind of problem that can occur during mosaic in situ conservation. Participants took part in mechanical cleaning of the mosaic surface, removing the old and deteriorated cement repairs, stabilizing and consolidating the mosaic structure, injecting of liquid mortar, replacing destroyed nucleus, filling the lacunae, edge repairs, and resetting tesserae. All the processes were followed up with new technical and photo documentation using the advanced technique of photogrammetry.

After two seasons of in situ conservation of this mosaic, together with the participants, we have stabilized almost the entire surface of the mosaic with all the above-mentioned techniques. It is necessary to continue the good practices until this project is completed and the mosaic is on display to the public. Consequently, this mosaic will again be the focus of the workshop in 2022.

In addition to all the mosaics that have been documented, conserved, restored and displayed in the Archaeological site of Stobi, the most important outcome of this project is the students who have participated in the workshops and gained experience and both theoretical and practical knowledge in valuation and preservation of cultural heritage.

Each Balkan Heritage Workshop contributes to this program and facilitates significantly the conservation of at least one of the endangered mosaics!

Notes:
Major field school topics/activities: The workshop will enable participants to gain comprehensive knowledge and hands-on experience in both Roman and Late Roman mosaic conservation. The participants are going to be involved in an ongoing conservation project and will work with authentic mosaics from the ancient city of Stobi. Lectures on history and technology of Roman and Late Roman mosaics, as well as special tours of significant sites with ancient mosaics: Bitola and Ohrid (R. of North Macedonia) and the ancient Macedonian capitals Pella and Aigai/Vergina (Greece). Academic credits are available for students through NBU, Bulgaria.

Experience Required: None. The variety of activities and team flexibility make this project suitable for both beginners and advanced (either volunteers or students) in conservation. A valid COVID-19 certificate is required.

Room and Board Arrangements:
Accommodation: In recently renovated air-conditioned cabins at the archaeological site next to the ancient ruins of Stobi, in rooms with two to three beds. Each cabin has 4 bedrooms + living room, 2 bathrooms with showers and WC. A washing machine and Wi-Fi are available for free. There are outdoor and indoor dining and social spaces. Meals: Three meals per day are covered by the reimbursement payment. They usually take place (except the lunch packages during the excursions) at the site's dining room or outdoors next to it. Requests for vegetarian food are accepted. Specialized diets (vegan, kosher, gluten-free etc.) are difficult to maintain in this location. Participants must pay on their own for extra meals, beverages, services and products!