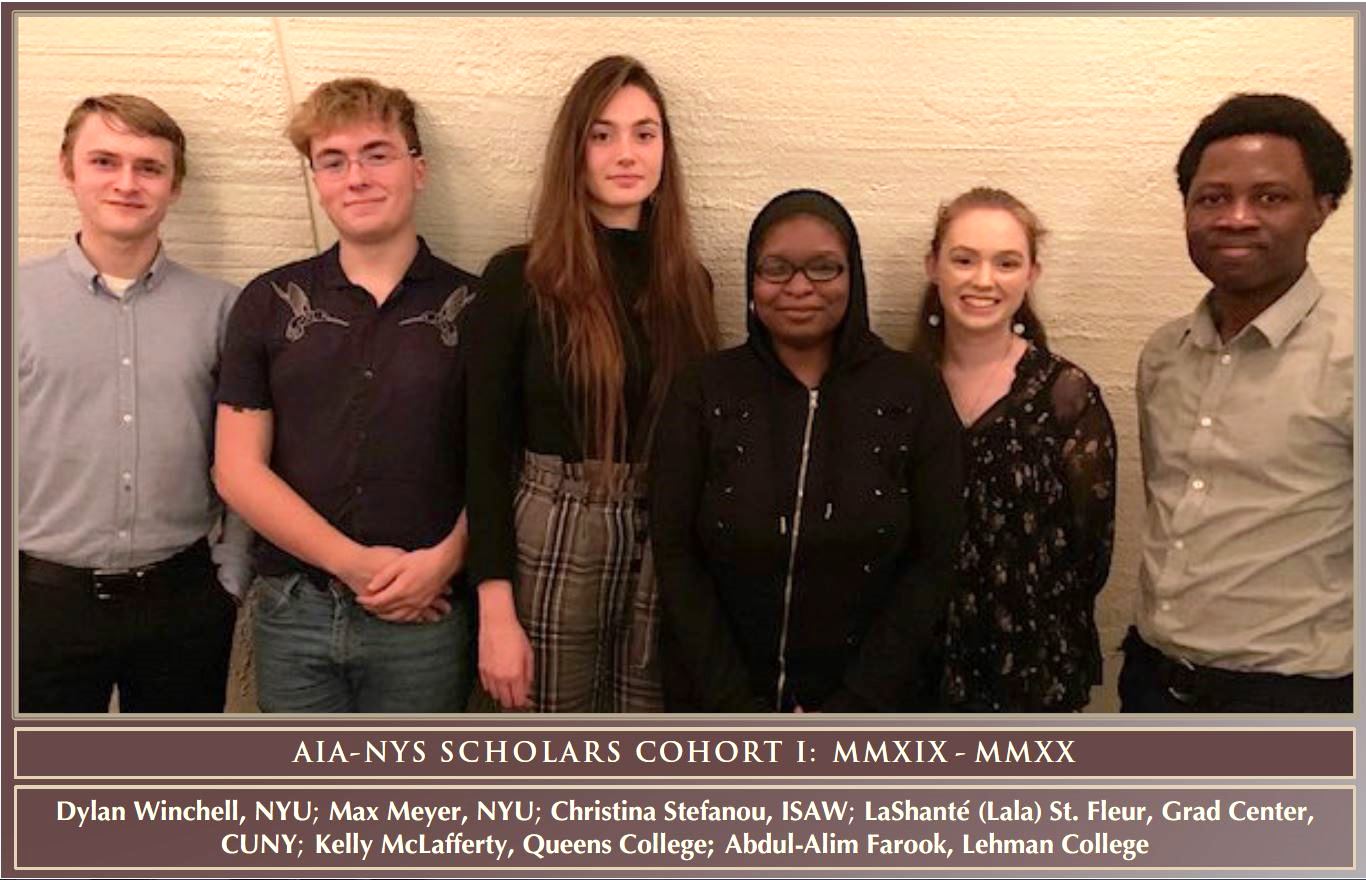 1)  The AIA-New York Society awards up to 6 free complimentary student memberships in the AIA for students enrolled in a college or university within the five boroughs of New York City (the Scholars).  The Scholars receive, in addition to ARCHAEOLOGY magazine, a subscription to the American Journal of Archaeology, if requested, and costs for registration and Opening Night Reception at the AIA’s Annual Meeting  if they choose to attend.

2)  One of the 6 Scholars will also receive, if they apply, the AIA-New York Society’s Archaeological Fieldwork Scholarship of $1,500 to support participation in a fieldwork project.

The Program fosters involvement and belonging specifically with the AIA-New York Society in additional ways.  When attending the Society’s many lectures the Scholars can network with event speakers and Society Officers at the dinner which follows the event.  Indeed the Society will cover the cost of 2 of the dinners for each Scholar.  Also, the Scholars are encouraged to publish in the Society’s Newsletter an article about any of their fieldwork experiences.  The awardee of the AIA-New York Society’s Archaeological Fieldwork Scholarship is required to write an article about their awarded project.  Another benefit of the Program is that the AIA-New York Society becomes closer to local college and university faculty because it is they who start the process by writing a recommendation nominating a student.

In sum the AIA-New York Society Scholars Program welcomes and supports young scholars as part of the AIA nationally and specifically of the local AIA community, an involvement that hopefully remains and grows stronger with time.

On Wednesday, October 16th all 6 members of the first cohort of AIA-New York Society Scholars (2019-20) were introduced in person at the AIA-New York Society Annual Meeting held at the City University of New York’s Graduate Center.  The awardees are: Abdul-Alim Farook, Lehman College; Kelly McLafferty, Queens College; Max Meyer, NYU; LaShanté (Lala) St. Fleur, CUNY Graduate Center; Christina Stefanou, Institute for the Study of the Ancient World and; Dylan Winchell, NYU.  At the lecture and dinner following the Annual Meeting the Scholars met the speaker, Dr. Gordon Noble, University of Aberdeen, Scotland (The Picts – New Discoveries of the “Lost People of Europe”), together with New York Society President Jeffrey Lamia and other members of the Society’s Board.