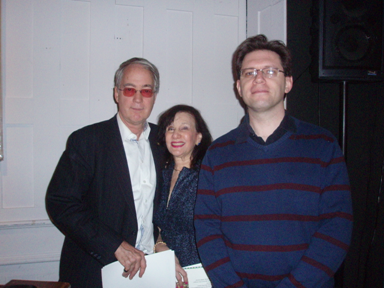 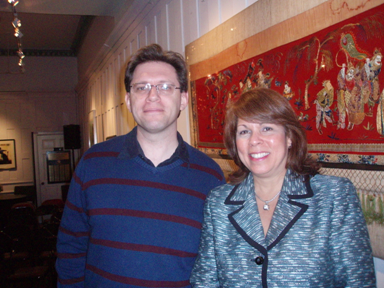 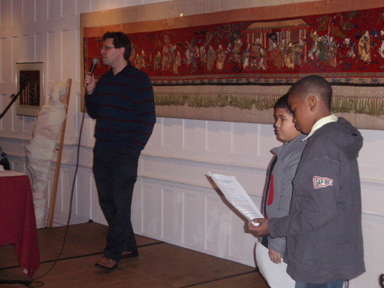 Since its founding in 1898 by novelist-poet Charles de Kay upon his return from being American Consul-General in Berlin, the National Arts Club in New York City has been a focus of artistic excitement and excellence. Throughout much of its history, this remarkable institution has evidenced a strong commitment towards educating the next generation. Its Education Committee focuses on elementary school children with various writing and reading programs. The Club’s Archaeology Committee additionally has recently commenced its own educational initiative exposing Washington Irving and Hunter high school students to archaeological inquiry and demonstrating the shared humanity which unite us all.

On a brisk December morning, heavily clad students from The Bloomingdale School travelled downtown by bus from the Upper Westside of Manhattan to 15 Gramercy Park South. The doors opened and class after class entered the magnificent mansion—a National Historic Landmark and previously home to Governor Samuel J. Tilden who is related to Archaeological Institute of America’s Board Member, Douglas A. Tilden. Once seated in the Grand Gallery with its Gilded Age ambience seemingly at variance with a mummy leaning casually against the front wall in honor of the occasion, the 150 youngsters were enthusiastically greeted by Club President O. Aldon James, Jr., who said he hoped they would in the future become members, and by the all-embracing Education Committee Co-Chair Marilu Ramirez, who administers this annual event associated with the Creative Writing Enrichment Program.

Richard Panchyk, author of Archaeology for Kids, was the focus of thespecial program geared towards six to ten year olds. Utilized by schools and libraries nationwide, his book covers the how and why of archaeology, discusses some of the key discoveries of cultures from ancient times through the recent past, and offers suggestions for projects elucidating archaeological concepts. The National Science Teachers Association referred to this volume as “your ticket to a fabulous journey around the world.”

The hour was divided into three sections. In the first after likewise warmly welcoming the audience, Michele A.F. Kidwell, Chair of the Archaeology Committee and a member of the Archaeological Institute of America’s 2010 and 2011 Gala committees, began by stating books were very special and that she wished to have her copy of Archaeology for Kids autographed by its author. She then proceeded to interview Richard Panchyk, asking numerous questions such as:

MK: Were you ever an archaeologist?

RP: Yes, both studied and worked as an archaeologist.

MK: Does your book cover everything there is to know about archaeology?

RP: No, but a lot. You could have a whole library on archaeology.

MK: (In an aside to the audience) I bet a lot of you have seen the Indiana Jones movies. (To RP) Is it dangerous like in the films?

RP: It can be because you often work when it’s summertime so it’s really hot. And, animals like snakes are around.

MK: Do you get dirty as an archaeologist?

RP: Yes (Much laughter from all in response to his reply).

MK: Does knowing about other people teach you about yourself?

RP: Yes, by finding similarities with others.

MK: Why do you have to dig to find things?

RP: Many things have been buried in tombs or are found in garbage dumps or just lost from long ago, and people have built on top of them.

MK: What about Indian arrows heads?

RP: They are hard to find since New York doesn’t have many old farms left.  That’s where most are unearthed.

MK: Have children ever discovered anything important?

MK: (To the audience) My last question is to the students – How many of you want to be archaeologists? Great to see so many raised hands.

Jamaal Robinson and Erion Baez, two students from the Bloomingdale Schoolread from a list of questions prepared in advance by Ms. Ramirez. These included topics such as the age Richard Panchyk was when he commenced writing, how one becomes an author, the creative process, and how to become a successful writer. In answer to their queries, Mr. Panchyk replied that he started writing as a young boy. Also, he believes that it doesn’t matter whether you write by hand or use a computer as long as you write.

An interactive presentation by Mr. Panchyk with additional student volunteers selected by Ms. Ramirez comprised the final segment. His oft repeated mantra to all was to observe just like a detective. The participants themselves functioned as props. Seven children stood in a circle like statues. The advice was to draw the entire arrangement and then each figure separately. We were told that context was important.Then, two of the elementary school students reclined on the floor as if they were skeletons first on their front then on their backs. They were asked about what they were holding and had in their pockets and to guess what an archaeologist might say about each article.

Another topic related to artifact identification. Artifacts were displayed one after another. Among the varying objects included was a ripped newspaper from 1869 which was turning yellow, a fading sampler, a clay fragment over 1000 years old, and a coat belonging to a boy in the first row who repeatedly raised his hand. General questions were posed such as:

All the students in this special audience as well as their teachers had a wonderful time at the National Arts Club.  With an educational mission strongly advocated by President Aldon James and an enjoyable, informative program organized by Ms. Ramirez, the future for these budding young archaeologists in Manhattan has been greatly enriched.