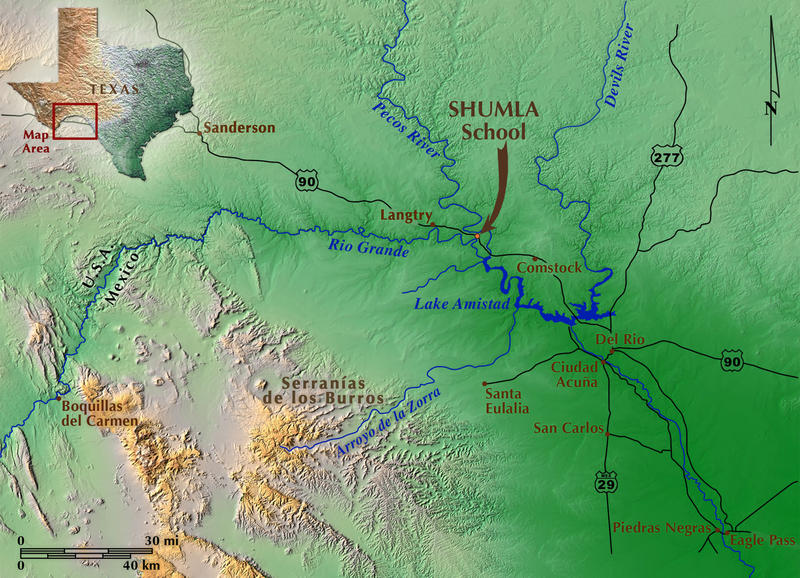 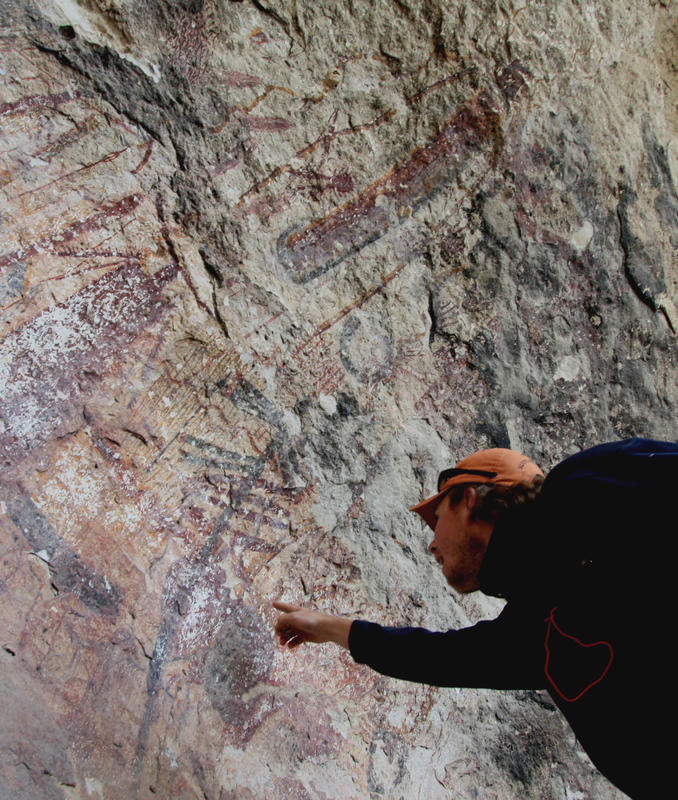 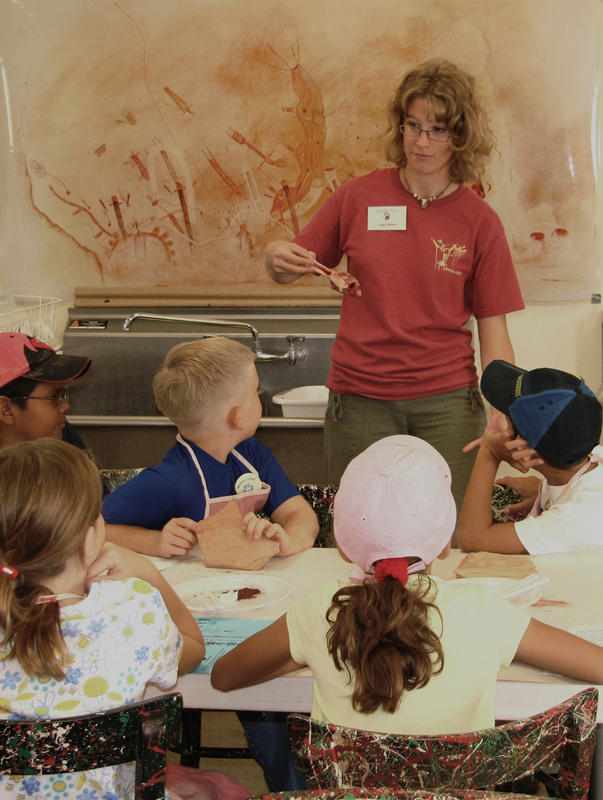 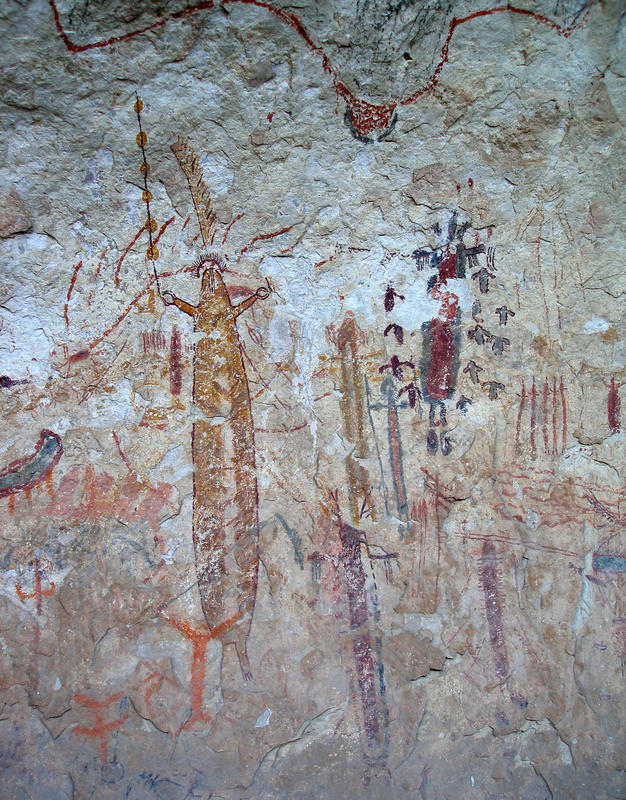 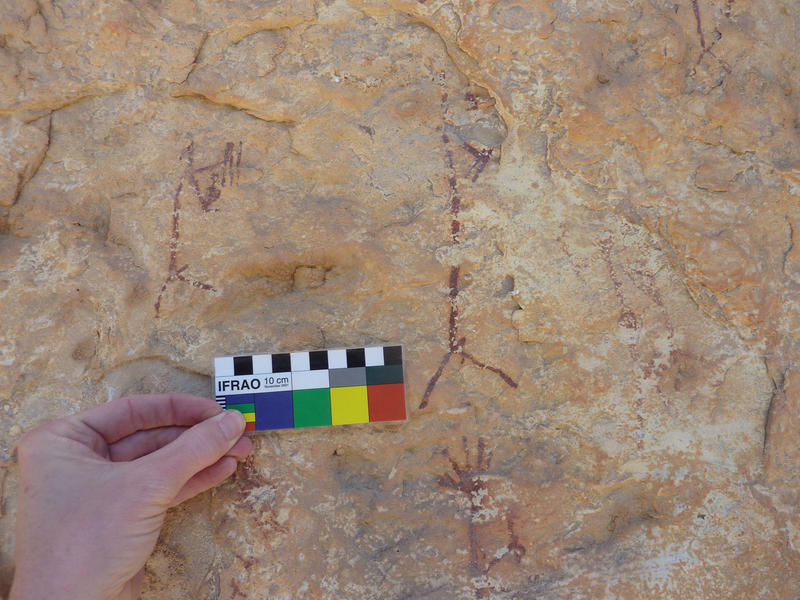 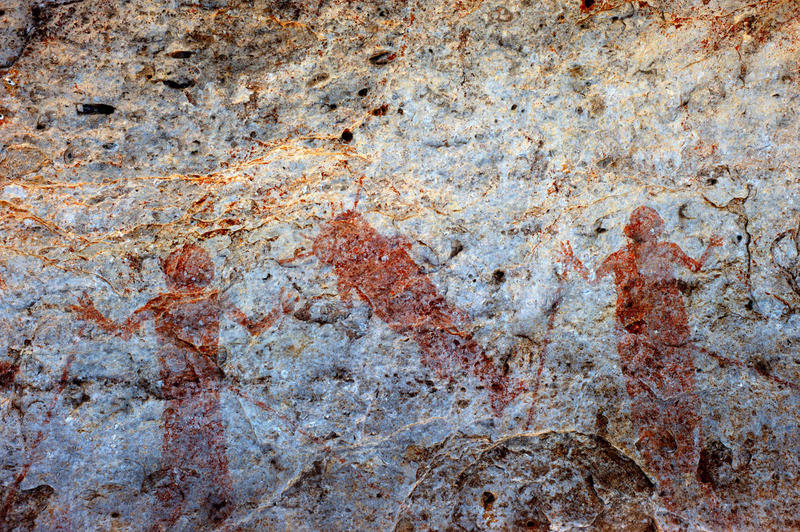 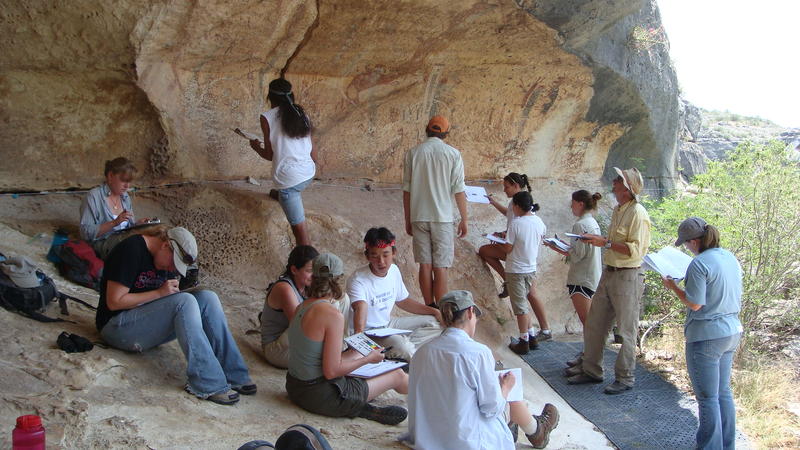 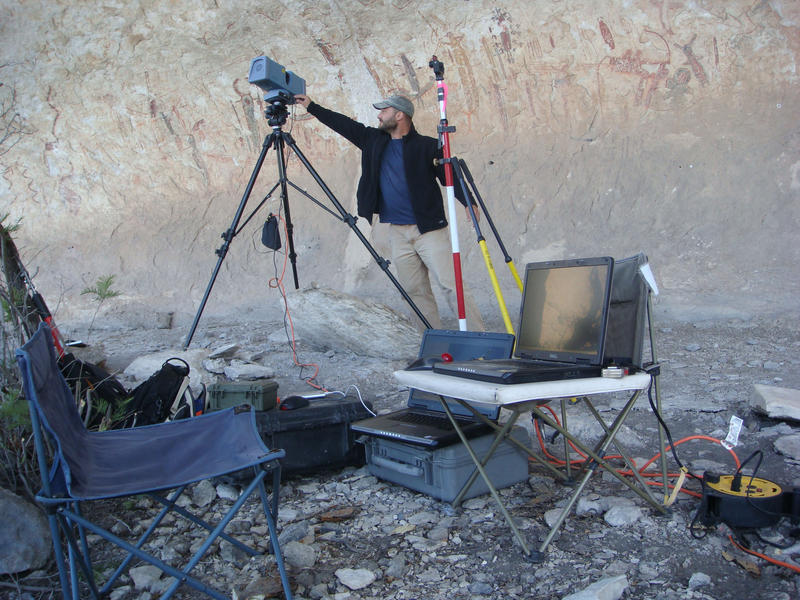 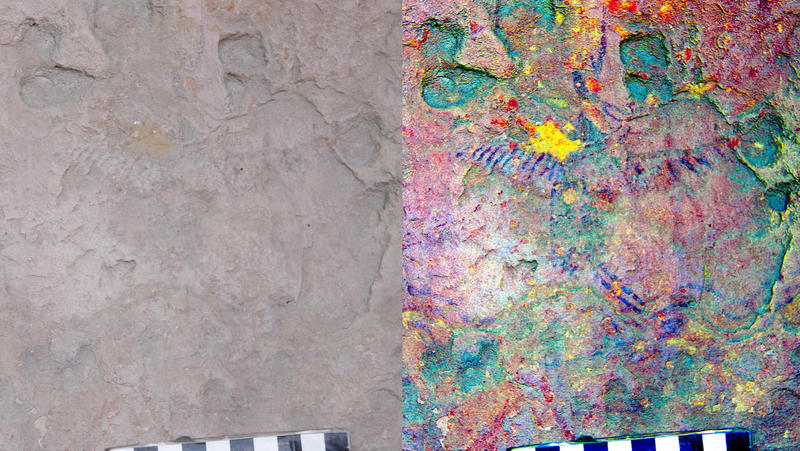 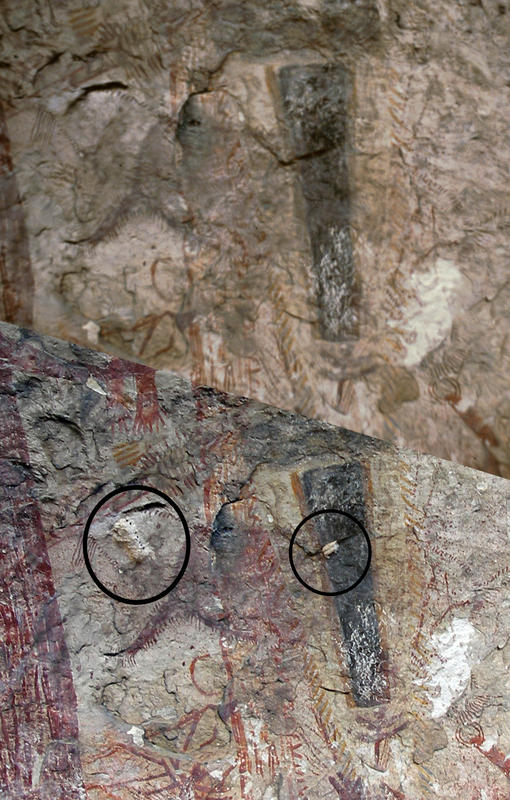 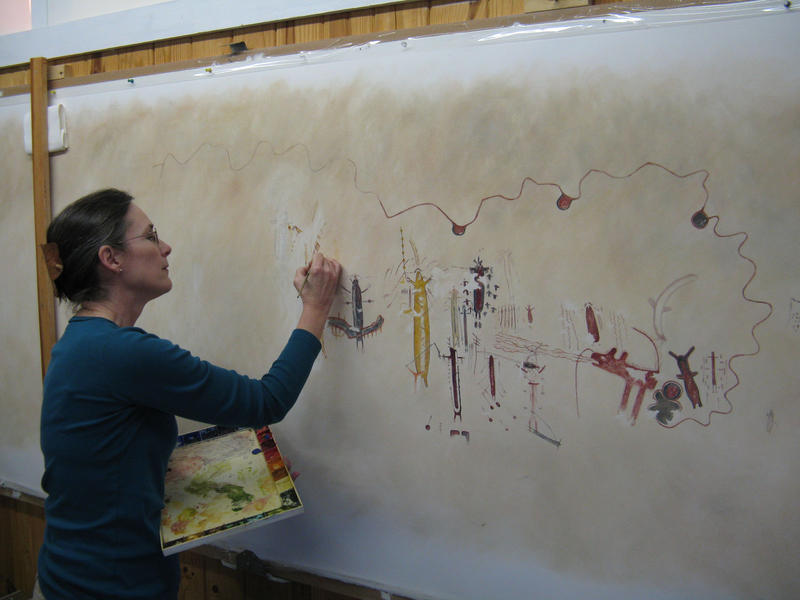 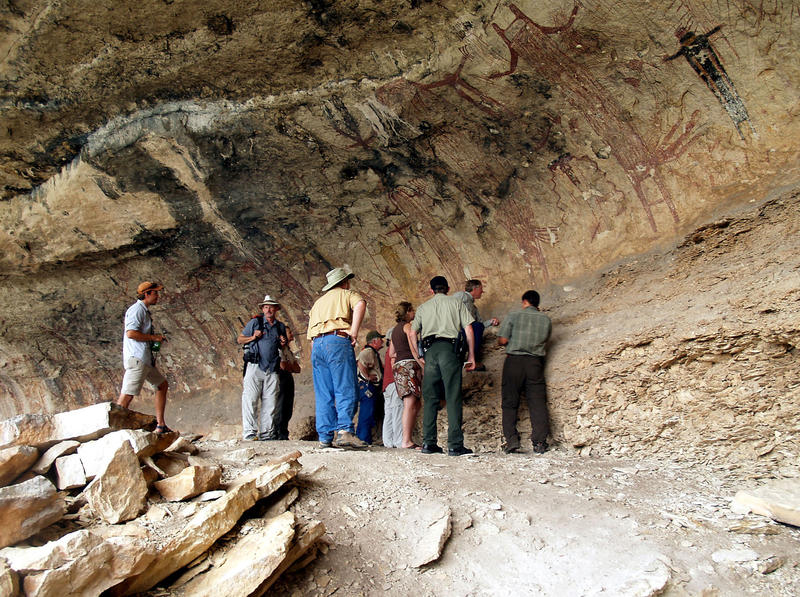 The Lower Pecos Canyonlands of southwest Texas and northern Mexico house some of the most complex and compositionally intricate prehistoric rock art in the world (Figure 1 & Figure 2). First efforts to document the rock art began in the 1930s. In some cases, this early documentation is the only surviving record of paintings destroyed by vandals, lost to weathering, or inundated by Amistad Reservoir.

The unique nature and incomparable richness of this threatened cultural legacy inspired SHUMLA (Studying Human Use of Materials, Land, and Art) to create a permanent visual and textual rock art archive for present and future generations and promote preservation through education.

SHUMLA is a nonprofit archaeological research and education center working internationally to connect people of all ages with the land and their cultural heritage. Since its inception in 1998, SHUMLA has served over 21,000 children and 3,000 adults in the United States and Mexico through heritage education programs. Youth programs are designed to teach science and math concepts within the framework of archaeology and promote stewardship of rock art and other cultural resources (Figure 3).

SHUMLA launched the Lower Pecos Rock Art Recording and Preservation Project in 2009. This effort, the most intensive rock art documentation project undertaken in the region, is funded through grants and individual gifts. Goals of the project are to:

The Lower Pecos Canyonlands provide one of the best-preserved and longest records of forager lifeways in North America. Over 250 rockshelters are known to contain rock art; new sites are discovered each year. The pictographic record spans a period from 4,000 years ago to historic contact times. Pictographs are the most abundant form of rock art found here. Although not all paintings fit neatly into categories, there are four main classifications—Pecos River Style, Red Linear Style, Red Monochrome Style, and Historic Period.

The Pecos River Style is exemplified by multi-colored, human-like figures accompanied by animals and an assortment of enigmatic designs (Figure 4). Panels, some over 100 meters long, are impressive in scale and intricacy. Some are interpreted as narratives documenting complex myths and rituals. AMS radiocarbon dates for these images range from 4200 to 2750 BP.

The Red Linear Style is characterized by animated, small, fine-lined figures of animals and humans (Figure 5). Although referred to as “Red Linear,” implying the use of only red in their production, some images are black or yellow. Based upon subject content and two radiocarbon dates, the Red Linear Style was believed to have been produced around 1,280 years ago. Recently, however, multiple examples of “older” Pecos River Style painted over “younger” Red Linear Style pictographs were identified, highlighting the need for further dating and re-examination of the stylistic classifications.

The Red Monochrome Style portrays static, frontally posed human figures associated with bows and arrows and realistically depicted animals in profile or dorsal view (Figure 6). This style began sometime around 1050 BP during the Late Prehistoric period. Although younger in age than the other two styles, there are relatively few known Red Monochrome sites.

The daunting task of rock art recording is not only to preserve the imagery for future generations, but to capture the data in such a way that it is useful for detecting patterns; patterns are the clues to “making sense” of past human behavior. Below is an abbreviated description of the techniques used by SHUMLA to record rock art; they represent 25 years of development by Carolyn Boyd (SHUMLA Executive Director and Principal Investigator) and her staff.  SHUMLA Research Interns have made significant contributions developing new recording forms and refining field and lab protocols. Students enrolled in SHUMLA’s Field Methods in Rock Art Research class offered through Texas State University learn this process and assist in data gathering (Figure 8).

Most Lower Pecos rock art is on private property; landowner permission must be secured before visiting a site. Once permission is granted, we conduct an initial visit and enter into Phase I – Site Assessment. During this phase, we complete site forms, create site and feature maps and conduct preliminary figure counts. With this information we can accurately project time and costs required to document the site.

Site Forms. A State of Texas archaeological site form is completed during initial visits. This form records general information such as site type, names of recorders, work performed, location and cultural manifestations. It is augmented by SHUMLA’s Rock Art Site Form that documents information such as the best time of day for photography, number of panels and their level of preservation, and a general description of the rock art assemblage.

Feature and Site Maps. Pictographic panels painted on rockshelter walls and cliff faces are non-portable artifacts or “features.” High resolution, mosaic panoramic images are produced for rock art panels to serve as feature maps. We apply a digital grid to the panoramas to generate unit numbers for documenting figure locations.

Rock art is often housed in rockshelters that contain midden deposits and mortar holes. We produce site sketch maps to document layout and placement of rock art panels in relation to other vestiges of past human activity. This is a very expedient and inexpensive form of mapping. As funding becomes available, we use 3-D LiDAR laser scanning to map sites. This cutting-edge technology provides highly detailed and accurate site morphology to 1 mm accuracy (Figure 9). The benefits of this technology for education and for monitoring site conditions are immense.

Preliminary Figure Counts. While one team completes site forms and produces sketch maps, another team conducts a preliminary figure count of anthropomorphs, zoomorphs, and enigmatics. Placement of a figure into one of these three categories is guided by specific criteria set forth in the project research design.  Each figure is assigned a reference code including site number, figure classification, and a unique number.

A very helpful tool throughout the recording process, especially during the preliminary figure count, is a digital camera with DStretch capabilities (Figure 10). This technology allows for on-site digital image enhancement of faint images virtually invisible to the naked eye.

A challenge archaeologists must address is that rock art cannot be excavated, bagged, and taken back to the lab for analysis. With proper field methods, however, it can be retrieved in the form of verbal and graphic documentation. A panel can be “reconstructed” from field data. During Phase II, we photograph all pictographic elements, produce illustrations, and record attribute data for each.

Photography and Photo Enhancement. Photographic documentation is essential for the entire site, including associated archaeological features, environmental setting, and the recording process. We take hundreds to thousands of digital photographs at every site and assign each a photo reference number. These numbers are entered onto a form to document weather conditions, time of day, camera settings, and a brief subject description.

Images identified during the preliminary figure count are photographed with and without scale. The photographer takes an overall photo, as well as midrange, close-up, figure top, bottom, right, left, and detail views of attributes associated with the figure, such as headdress, staff, and atlatl. In the lab, copies of each photograph are renamed and assigned a unique code. The original photographs are filed in a folder entitled “originals” and are left untouched.

Legacy photographs are compared to contemporary photographs to evaluate degradation of images over time and to identify possible agents of deterioration (Figure 11). In some cases, additional attribute data, now unavailable due to degradation of the art, are gathered from legacy photographs. We also use a variety of photographic and digital enhancement techniques (such as near infrared and ultraviolet photography, Adobe Photoshop, and DStretch) to reveal obscured rock art.

Recording Forms. Three forms are used to record rock art, all of which are double checked by independent recorders in the field and in the lab to ensure data integrity.

Using a light table, we produce accurate illustrations by tracing photographs of the imagery onto Figure Illustration Forms, carefully noting superimposing figures, scale, color, and associated elements (Figure 12). The tracings are compared against the actual image at the site to verify accuracy.

Note Forms for each figure are updated every time recorders conduct any type of analysis involving the figure, whether in the lab or in the field. Through time, this creates a written record of the long-term condition of pictographs. All concerns, unique observations, and observable associated figures are recorded in detail.

Converting field data into a format that can be stored and processed by computers requires adherence to strictly defined procedures. All data, visual and textual, is stored on a server, mirrored onto a second hard drive, and backed-up off-site.

After recording forms are field checked, they are scanned for ultimate curation at Texas State University’s Center for Archeological Studies. All data are entered into a searchable database. These data will be linked to relevant spatial and geographic information in ArcGIS. Analyzing attributes through database queries reveals patterns needed to begin the process of interpretation. Hypotheses articulated in the research design or others that were formulated during data collection can be tested using spatial, visual, and textual records.

The final step in the recording process is the creation of a full panel rendering that illustrates the rock art in full color (Figure 13). Pastels, watercolors, and Prismacolor pencils are used to re-create the rock art panel on large format 100 percent cotton watercolor paper. This process reveals interrelationships of figures within panels.

Dissemination of results and collaboration with scholars are not only goals, but mandates of the project. SHUMLA regularly achieves this through presentations at public and professional venues. Copies of all graphic and textual data are provided to site owners. Research findings are published in journal articles, monographs, dissertations, and theses. SHUMLA’s goal ultimately is to produce a multimedia digital library housing all visual, audio, and textual rock art data with multi-tiered access for the general public and researchers. Currently we are collaborating with Mexican, European, and Australian scholars to establish a global, multidisciplinary, and comparative research program utilizing data generated by the Lower Pecos Rock Art Recording and Preservation Project.

SHUMLA is creating a robust archival baseline for monitoring conditions of rock art and providing the basis for a proactive preservation, management, and research plan. We have documented 19 rock art sites, illustrated and collected attribute data for over 1,000 figures, and archived in excess of 10,000 photographs. Rock art documentation of a site, however, is never considered fully complete. Additional data are gathered as we refine our techniques and as new technologies become available.

Far from being the idle doodling of ancient peoples Lower Pecos rock art is well-ordered, highly patterned and rule governed. Through analysis of these patterns researchers are gaining insight into the meaning and function of the art and the lifeways of the people who produced it. As more people appreciate what can be learned from rock art, the sites that remain unharmed will be protected for the future. In the meantime, SHUMLA will continue documenting this precious cultural legacy through the Lower Pecos Rock Art Recording and Preservation Project (Figure 14).

For more information about:

1990    Rock Art and Its Contribution to Hunter Gatherer Archaeology: A Case Study from the Lower Pecos River Region of Southwest Texas and Northern Mexico. Journal of Field Archaeology 17(3):263-281.

1995    The Lower Pecos River Region of Texas and Northern Mexico. Bulletin of the Texas Archaeological Society 66:541-560.