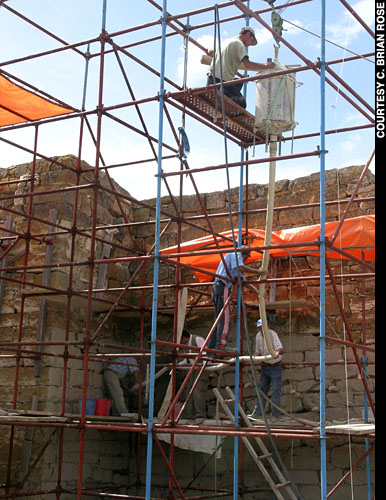 When I first arrived at Troy, nearly 20 years ago, what immediately struck me was the extent to which the excavated monuments were crumbling. Foundations exposed by earlier archaeologists had been left unprotected, and the tree roots growing through them were destroying what was left of the buildings. Visitors made the damage even worse by attempting to scale the remaining walls in imitation of Achilles and Menelaus. It was nearly impossible to read any kind of narrative from the ruins of the site, other than one of devastation. Troy is not unique: in their zeal for sensational discoveries, earlier archaeologists dug quickly and often abandoned their trenches without refilling them, or at least stabilizing the foundations of the buildings they had unearthed.

In addition to those not properly cared for after excavation, many more sites and monuments have been destroyed or destabilized as a result of warfare and looting, especially in the Middle East. Yet the funds to protect and conserve damaged sites and monuments have become increasingly limited. If we do not act quickly to reverse this damage, the remains of ancient societies will disappear, as will our memory of them.

The Archaeological Institute of America is therefore developing a new Site Preservation Grant Program intended to support the conservation of ancient monuments and the preparation of management plans for long-term maintenance of the cultural and physical landscape of sites. Sharing the responsibility for safeguarding the world’s archaeological heritage is now more important than ever, and a generous challenge grant from a member of our Governing Board has now set that goal within our reach.

But we cannot undertake this mission effectively without your support. The impact of your membership in the AIA will be felt around the world, in that you will play a role in stabilizing endangered sites whose remains are at risk of crumbling. You will be preserving the histories of cities not so different from ours, and of people whose lives would otherwise have been forgotten.

C. Brian Rose is the president of the Archaeological Institute of America.