by Lindy Crewe, Dept. of Archaeology & The Manchester Museum, University of Manchester 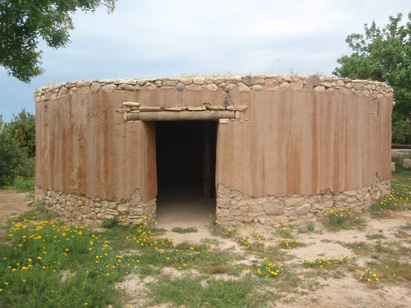 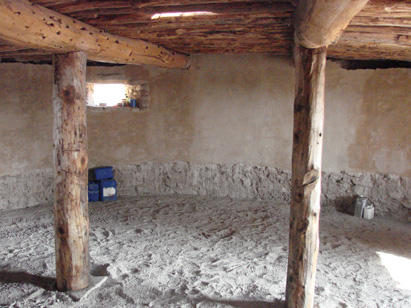 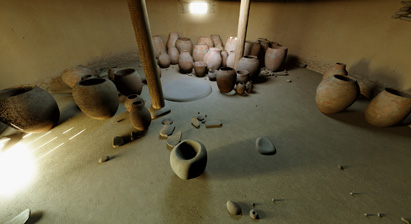 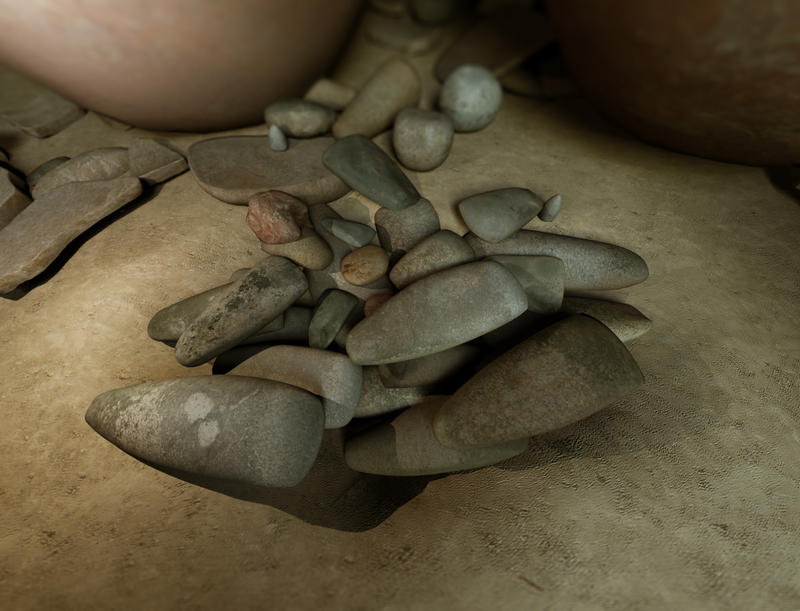 Summary of the project

The goal of the project was to build a replica of a Chalcolithic roundhouse within the roofed and fenced visitor area of the site of Kissonerga-Mosphilia near Paphos in tandem with a computer reconstruction of the building’s interior, complete with all objects in situ. The impetus behind the project was to increase understanding and appreciation of Cypriot prehistory, and to raise awareness of cultural heritage issues through employing tourism and educational tools to integrate the archaeology into an accessible narrative. This is important for Cyprus as the pace of tourist development on the island has led to the destruction of many archaeological sites, the majority of which are small, low visibility components, difficult for non-specialists to engage with.

The building reconstruction, using experimental archaeological and traditional techniques, was funded by the A.G. Leventis Foundation, the Department of Antiquities of Cyprus, and the Kissonerga Village Council. Dr. Paul Croft (University of Edinburgh and the Lemba Archaeological Research Centre) was responsible for the physical reconstruction, with the assistance of archaeology undergraduates from universities around the world and expat volunteers from the Paphos area. The AIA Site Preservation Grant funded component was the creation of the 3D computer rendering of the building with all the finds in situ to accompany and enhance the physical replica, along with costs towards filming the process and providing refreshments for a “working bee” open day to involve the village, which we held on Sunday, July 18th, 2010.

The specific building chosen for the reconstruction was Building 3, dating to the Late Chalcolithic period (ca. 2700–2400 BC). This building is also known as the ‘Pithos House’ as it contained an unprecedented number of storage vessels and is of international renown. At 9m in diameter, the Pithos House is the largest Late Chalcolithic building known on Cyprus and there are several additional features which make this structure an ideal choice for bringing the story of Chalcolithic Kissonerga to life. The building was destroyed by fire, leaving a uniquely rich assemblage of goods preserved on the floor of the house, providing multiple strands of evidence for life in the Chalcolithic. There were approximately 280 objects found within the building. In addition to at least 37 storage vessels in situ, other finds include exotic faience beads, evidence of copper working, and one of only two stamp seals known from this period. The fire also left evidence of the different activities undertaken by the people using the roundhouse. These include tool manufacture, food and liquid preparation and consumption, and possibly the earliest known olive press on the island. The fierceness of the fire suggests that many of the storage vessels may have contained olive oil. There is no doubt that the Pithos House was a building of a special nature, perhaps providing evidence for privileged access to resources by some sectors of society. The reconstruction was undertaken with the full support and input of the excavator, Professor Edgar Peltenburg of the University of Edinburgh.

Description of the undertaking

We began the computer and physical reconstructions in spring 2010. The PI (Lindy Crewe) and the computer designer (Matthew Dalton) visited the Paphos Museum and the Cyprus Museum, Nicosia, in order to photograph the approximately 280 objects found within the Pithos House. We relocated all objects in the stores, photographed them from all angles and Mathew Dalton then created 3D models, overlaying the photographed texture of each specific artifact onto the object, creating an accurate replica. Construction of the physical building involved two field schools for archaeology undergraduates (organized by L. Crewe over the Easter and summer breaks) and the roof and door were finally finished in March 2011 (see Figure 1 and Figure 2). As the physical building was constructed, photographs were sent to the designer who modelled the building’s interior to match the physical features (Figure 3). The 3D rendered objects were accurately placed using published plans from the site report (Peltenburg, 1998). This has enabled us to create views of artefacts hidden inside or beneath other objects and to display minute beads and bone tools, which would normally be too small to show on a regular plan (Figure 4).

An important output has been three posters for mounting within the roundhouse. The posters are large (two at 1m x 1.10m and one at 2m x 0.80m) with bilingual English and Greek text (kindly translated by Manolis Melissaris and Vasiliki Koutrafouri). Posters will be mounted on the walls of the roundhouse in July 2011. Mathew Dalton will also create web-friendly versions, which will be linked to the websites of the Manchester Museum, the British Museum and the University of Edinburgh Archaeology Department.

The Kissonerga-Mosphilia roundhouse reconstruction has formed Stage 1 of a larger undertaking to bring to life 10,000 years of occupation in the village, with the aim of increasing understanding of the importance of prehistoric archaeology and cultural heritage preservation. The rapid implementation of this aspect with the extremely positive reaction from the village generated by the “working bee” day held in July 2010 has been a great start. Ongoing excavations at Kissonerga-Skalia will eventually provide a Bronze Age site for visitors and we will reconstruct a Bronze Age rectilinear house to provide contrast with the Chalcolithic one, but this is some years off. During the digging season in July this year, I will be maintaining our momentum through inviting the villagers to some ‘learn to dig’ days. Finally, I would like to thank the AIA for their contribution to this project and I hope that the outcomes are of interest and value.