Temple of Athena at Assos 2008 Report 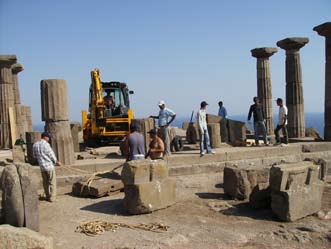 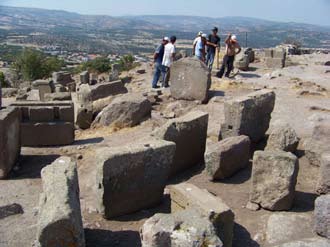 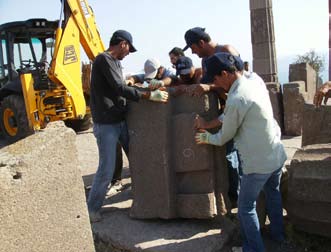 A report on the restoration and new presentation of the site

Towering impressively over the sea, the temple of Athena at Assos is a magnet for tourists from all over the world. Its design and construction, which date to ca. 530 B.C., also make it a key monument for our understanding of Greek temple architecture. The ruins of the temple were made even more prominent, however, in the 1980s, when missing parts of the stylobate were replaced and a total of five columns re-erected using some of the original architectural members. Since then, the temple has become a highly frequented tourist destination. Similar to other reconstructed temples (e.g. Temple of Poseidon at Cape Sounion, Temple of Athena at Lindos/Rhodes or the so called Temple of Concordia at Agrigento), the Temple of Athena at Assos obviously caters to the romantic ideal of a lonesome ruin picturesquely embedded in the surrounding landscape.

Until very recently, however, both appearance and preservation of the temple were unsatisfying in many respects: the five reconstructed columns had been re-erected by using several drums made of steel-reinforced concrete, which began to show severe defects several years ago. Their surface has partly broken away and the corroding steel reinforcements have generated considerable cracks in their surface. Without appropriate counter measures, the modern column drums will continue to disintegrate and will soon also endanger the stability of the columns. Similar deficiencies are also apparent in the area around the temple. After several excavation campaigns during the last 120 years, the temple’s many large architectural members are haphazardly scattered around the site, partly lying upon each other and partly covered by earth.

Some fragments have fallen down the slopes of the acropolis, and many have broken during the last few years.

In August 2008, a restoration project was begun with the following goals:

All together, this project aims at preserving the temple’s original remains while making this unique and all-important archaeological site more intelligible for the visitor.

Three weeks of fieldwork in August and September 2008 allowed us to take the following measures for reorganizing the appearance of the temple and its surrounding area:

The goal of this project is to make the acropolis of Assos more attractive and more informative to the visitor, while guaranteeing appropriate conservation of the ruin. Moreover, it will provide a basis for further investigations of the area around the temple and the entire acropolis. The support of the Archaeological Institute of America is thus fundamental for both making the rich ancient heritage of the acropolis of Assos accessible to the public in a responsible way and fostering archaeological research of the site.