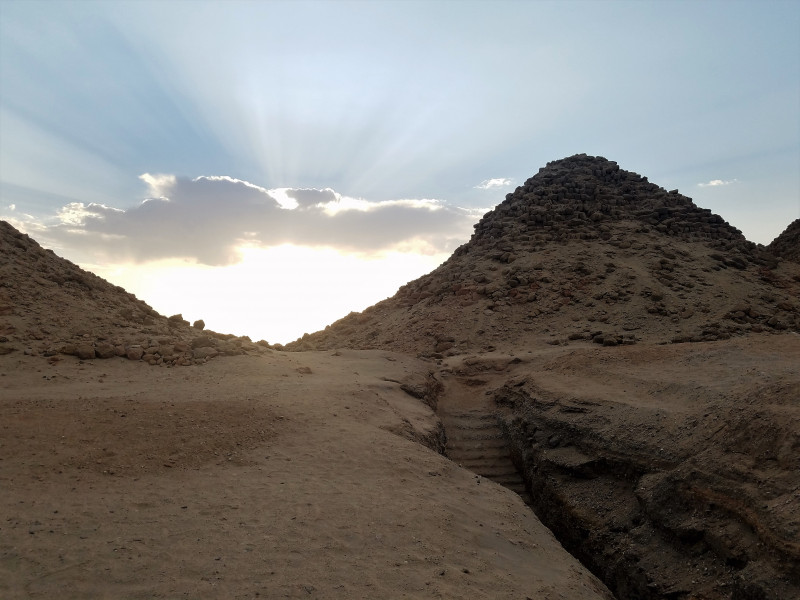 The Nuri and Royal Pyramids site located in Nuri, Northern State, Sudan, is the largest and most isolated part of the UNESCO World Heritage Site of “Napata.” Nuri contains the largest pyramid in ancient Nubia/modern Sudan, belonging to the 25th Dynasty pharaoh Taharqa, who is thought to have established the royal necropolis there. The site is the largest known royal cemetery in Sudan, and once had over 80 pyramids. It serves as the final resting place for at least 60 pharaohs/Nubian Kings and Queens, and hundreds of other individuals. The necropolis is believed to have been in use for at least 3,000 years.

The project is managed by co-directors, Pearce Paul Creasman, Associate Professor in the College of Science at the University of Arizona and Meghan Elizabeth Strong, Research Associate, Cleveland Museum of Natural History and Adjunct Assistant Professor at Case Western Reserve University, and assistant director, Abagail Breidenstein, doctoral candidate at the University of Michigan. The project is conducted in collaboration with the National Corporation for Antiquities and Museums (Sudan), represented by Fakhri Hassan Abdallah, and with Pima Community College’s Archaeology Centre (Tucson, Arizona).

When The Nuri and Royal Pyramids Project began its first fieldwork at the site in January 2018, site preservation was immediately identified as an area of chief concern. Despite Nuri’s designation as a World Heritage Site, only limited steps had been taken to protect the integrity of the site. The preservation of Nuri is threatened by urbanization, climate change, and dam construction along the Nile which has resulted in rising ground water. Creasman and Strong will utilize funding from the AIA Site Preservation Grant to implement a preservation strategy for the site that includes the construction of a low (1m tall) wall around the majority of the site, a strategy which has proved successful in preventing encroachment at other local sites, the creation of signs in both Arabic and English for the site, and the construction of a protective superstructure for Queen Yeturow’s tomb to protect it from the elements, in particular flooding.

Recognizing that outreach and education are key elements of site preservation, the Project will help familiarize local workmen with the history of the site and site management strategies and will provide organized tours of the site to students and local children. The Project also hopes to provide an opportunity for two of the site’s guards to take a course in heritage management at a local university. AIA Site Preservation Grant funding will also support the engagement of four Sudanese archaeology/heritage management graduate students who will be instrumental in creating and developing a Sudan-specific version of the Guide to Best Practices for Archaeological Tourism created by the AIA, ARCHAEOLOGY magazine, and the Adventure Travel Trade Association (ATTA), and, ideally, an Arabic language version of the existing AIA-ATTA Guide to Best Practices for Archaeological Tourism.