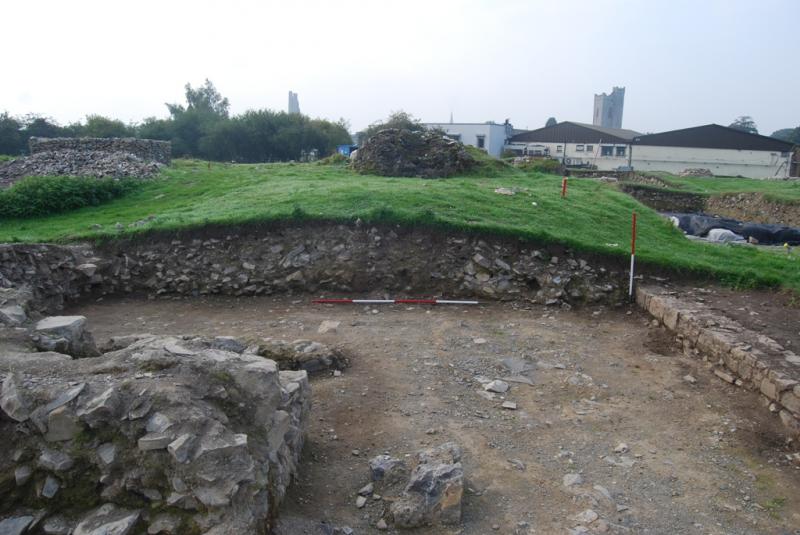 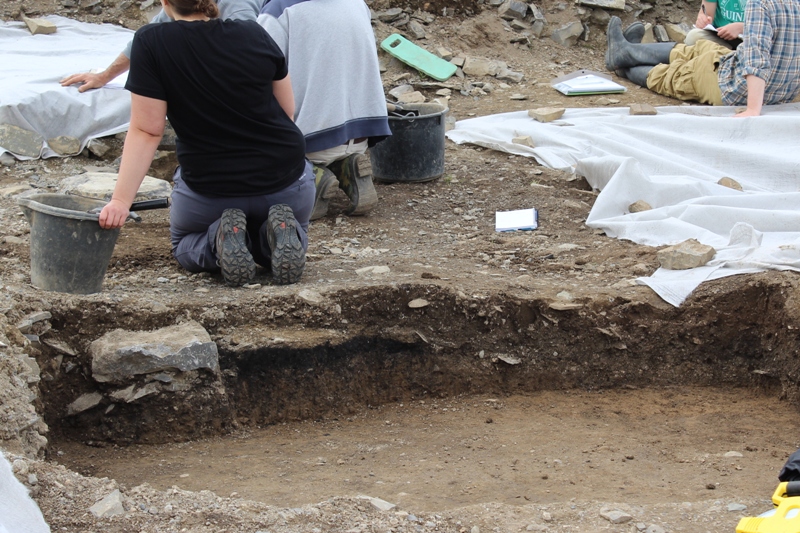 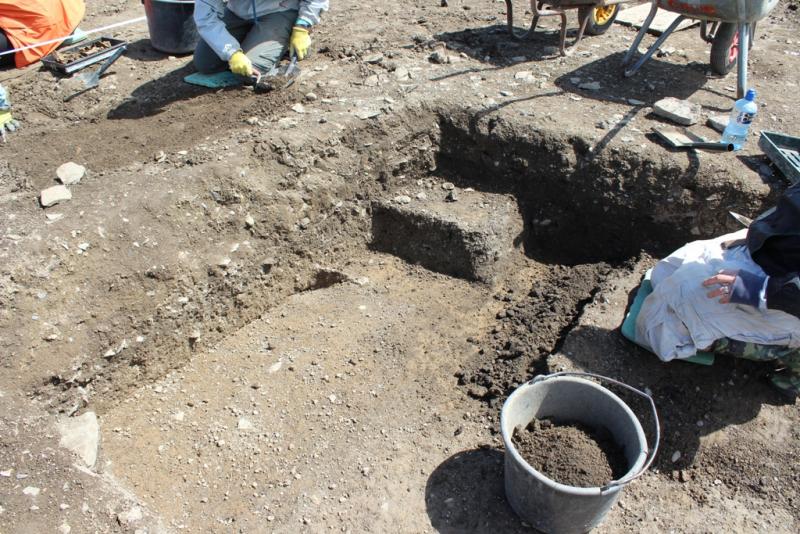 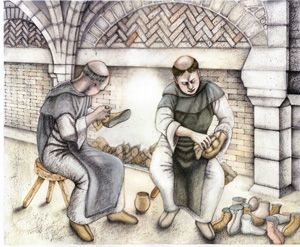 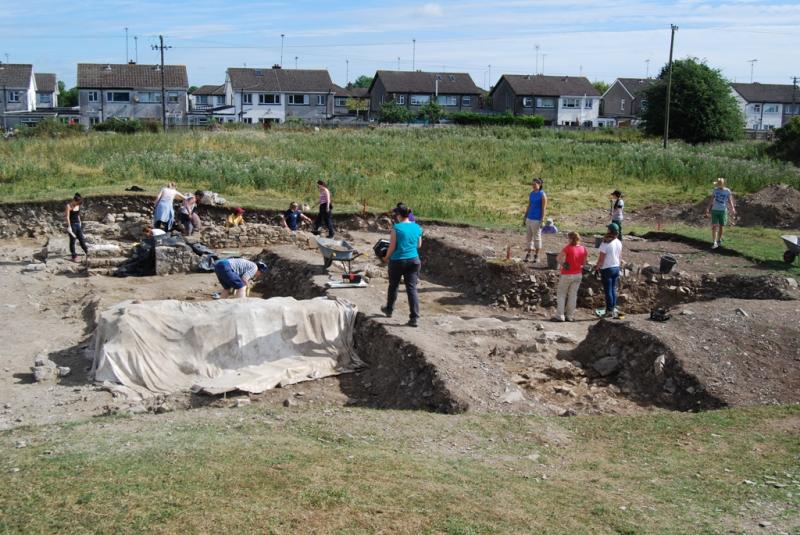 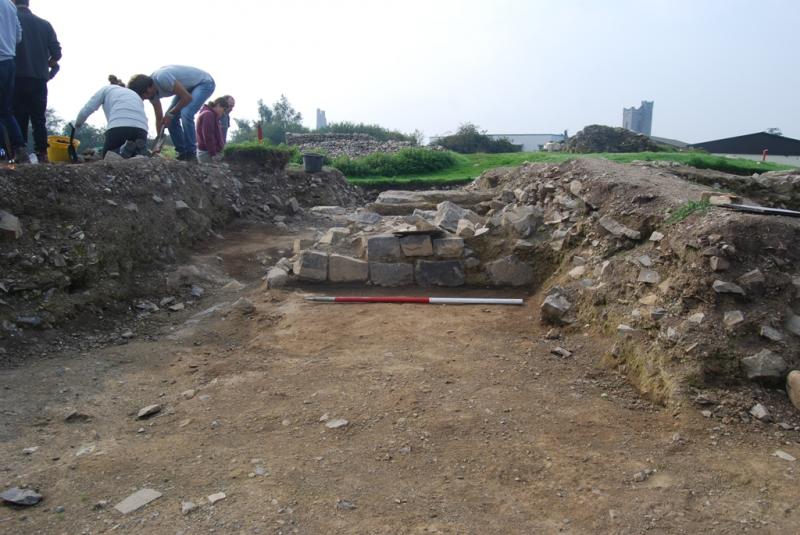 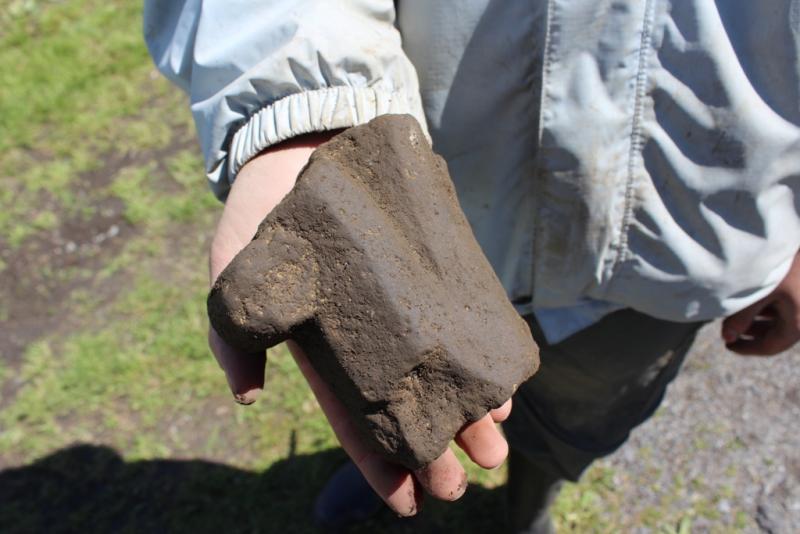 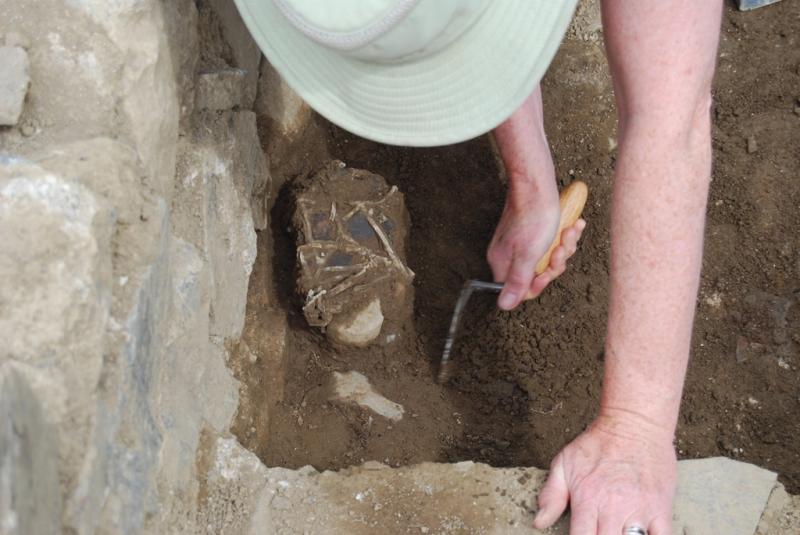 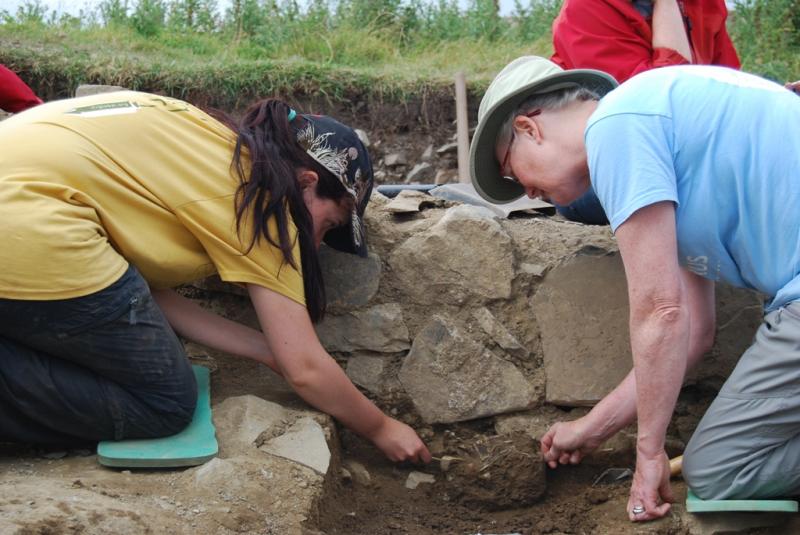 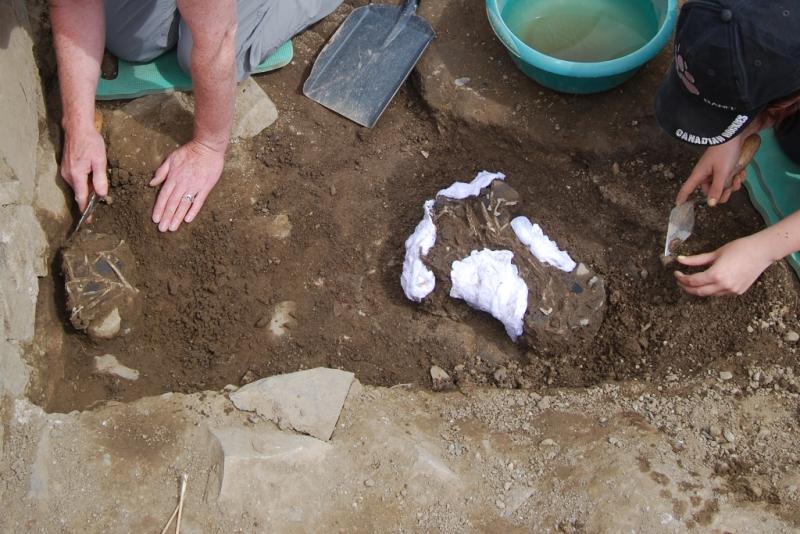 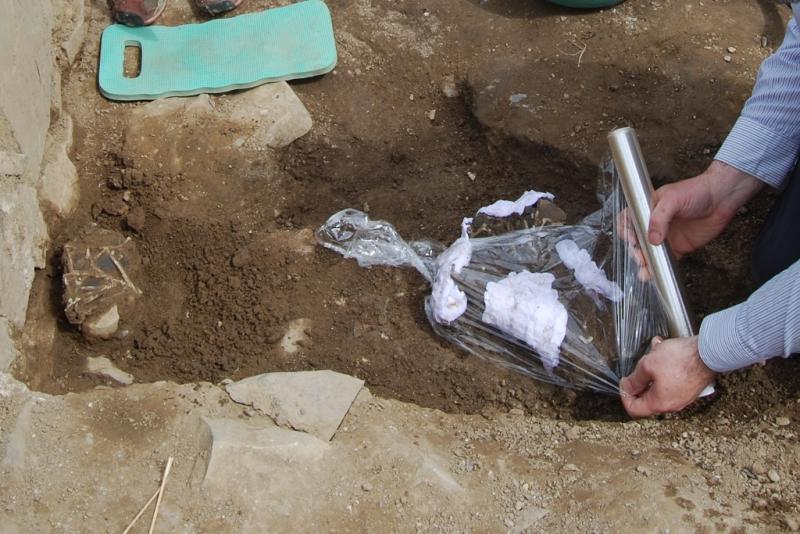 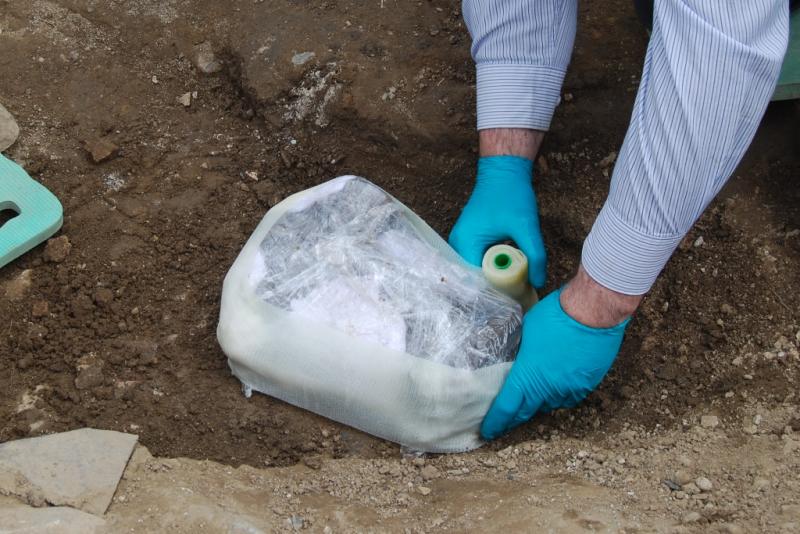 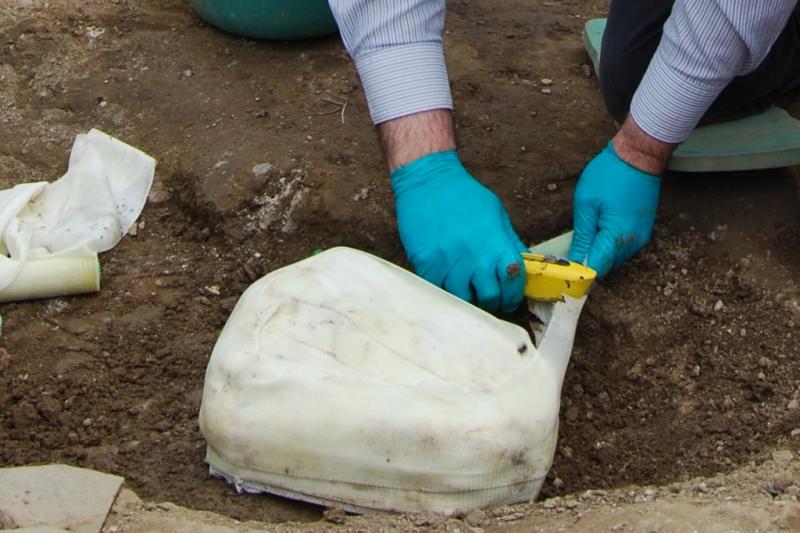 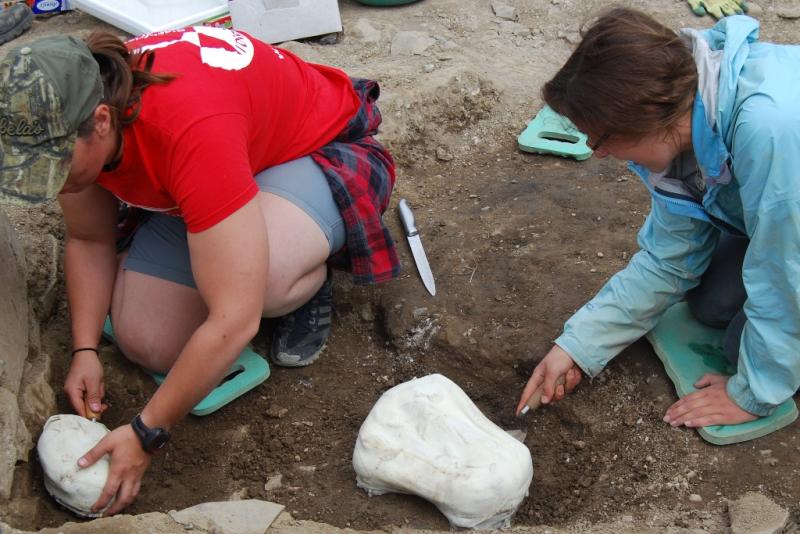 The following is the second in a series of blogs by project co-founder and site co-director, Finola (Fin) O’Carroll, summarising the results of the 2015 season. In this blog, Fin gives an overview of the findings in Cutting 6.

At the start of this 2015 season we resumed work in Cutting 6. This cutting had started out as a small 5m by 5m cutting opened to find the NE corner of the cloister in 2012. In 2014 it was hugely expanded to a 20m by 20m to explore the remains of the East Range, and the initial explorations were very rewarding. So far we’ve uncovered the full width of the East Range, part of the garden plots to the rear of the building, and the cloister ambulatory (the path the friars walked on around the cloister), to the front of the range. Within the range we found probably our most significant finds to date, stained glass still within its matrix of lead kames, some of which survived in sections up to 30cms in length. The collection of medieval window glass found to date, a considerable part of which is painted or stained glass, has just recently been taken to the School of History, Archaeology and Religion in Cardiff University where it will be conserved under the direction of Ms Jane Henderson and her students who will be undertaking BSc and MSc courses in conservation. We are really excited that this extensive collection (over 1300 pieces and counting) is being conserved.

We had found steps leading to a long gone upper floor last season (2014), and also a stone wall which was confirmed as being bonded with clay rather than mortar, suggesting that there was perhaps a phasing in the building of the East Range, and that even the upper storey might have been a later addition to an earlier single storey building.

One of the main reasons for exploring this part of the East Range was to locate the Chapter House, one of the most significant spaces within a Friary. We found internal divisions within the main body of the range, one of which, a wall standing over 1m high, was plastered on both faces, but had a step out from the south side of it. This confirmed for us that it was part of the Chapter House, and that this step was the footing for an internal bench which would have run around the walls to accommodate the community in their meetings. Interestingly, this wall projected through the east wall of the range, suggesting that the Chapter House extended east beyond the line of the range, and perhaps was extended from its original size. Now it has an internal length E/W of 13m or 40 feet; its width is still unknown, as the southern part of it hasn’t yet been excavated.

Perhaps the most interesting discovery of this year was a possible calefactory. This term denotes a warming room within a Friary, basically, a room with a fireplace where the community could warm themselves in winter. Only one fireplace was allowed in a Friary in the original rule, but in time this was slightly relaxed, and the Prior, for example, might have a fireplace in his apartments. We have yet to confirm that this is what we’ve found, but the location of a probable stone lined fireplace in a room adjacent to the Chapter House would be consistent with the location of this warming room in a Friary. It’s remarkable to consider the austerity of the lifestyle that rationed access to heat. It was only for a short period per day that the friars could avail of this fire to warm themselves (and possibly dry off wet robes). We’ll be resuming explorations in this area next season.