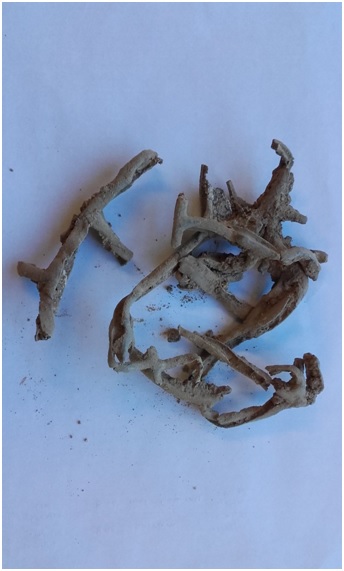 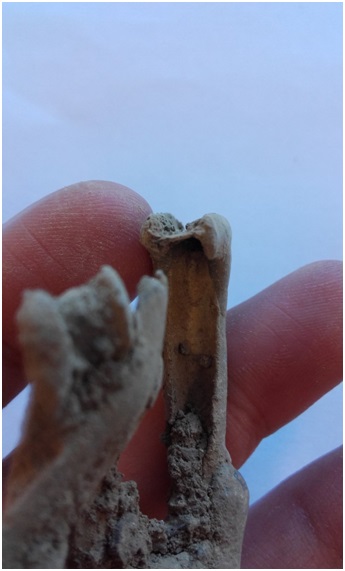 In the nine in a series of weekly blogs, IAFS/Learn intern Lauren Nofi reports on the progress in the post-excavation laboratory, looking at the collection of metal objects.

Hello, hello, hello! This week we’ve been continuing in post-ex, cataloguing and sorting our finds from the summer and our recent winter session. We’ve been updating our catalogues and labelling objects as necessary, as well as checking and cross-referencing different registers. The infant burial I was working on has dried and been re-bagged and packed according to our burial storage procedure.

Some of the material we were sorting and labelling this week included window lead. We have a separate register just for window lead, but sometimes lead was identified as simply a lead object and registered with our general bagged finds. We had to ensure all the bits of lead used to support window glass were properly noted both on their bags and their locations were traceable through the registers’ entries.

The bits of lead used in window glass are called “cames.” Now I know some of you are probably thinking, Homegirl, why do you care so much about scraps of lead from windows? Well, homedawgs, let me tell you a little story about the importance of window lead:

Once there was a very important and well-known Colonial American site which shall remain nameless since this is a tale of archaeological horror. They found so much lead in the form of crushed and warped cames, the individual pieces were recorded as simply a bulk find and shortly discarded. One day, after over a decade of simply discarding their window lead, an archaeologist with a mind for conservation carefully pried open the tiny flaps (each called a “leaf” and which would have secured the piece of glass). The window cames would normally look like the picture above, but the crushed cames would have the small wings overlapping the glass sealed together. I found this iron key amongst our artefacts, the very key to fellow intern Ciaran’s heart. It’s old and crusty just like him.

The main channel of the came revealed a surprise: the maker and year was embossed within the lead. It just so happens the English lead workers had jointly enacted a set of quality control regulations requiring all lead to be marked with maker information, so if it failed, the proper action could be taken with regard to suppliers. Suddenly, a whole new source of historical information became available though it has likely been there all the time, in the thousands of discarded lead strips. The window cames allowed archaeologists to date the construction phases of colonial buildings in the area to within a few years!

Now to be clear, I’m not saying our window lead is even from the same century as my little tale above (ours is usually about three or four centuries older), but I just wanted to explain how a very simple object can open up the history of a site unlike any other. So I’ll never scoff again at the care with which some bulk finds are recorded, and I know I am much more open to post-excavation work to err on the side of hoarding. Not that everything must be, or even should be, saved, but you never know what technological or analytical breakthroughs may be made in a few years’ time, so keep your mind open but be judicious regarding what bulk material you save.

In addition to lead, we also had copper, iron, and glass, artefacts to catalogue or update entries in our registers. Some of our iron is immediately identifiable, even with its bulky rust. Iron usually corrodes and forms brown and orange-y concretions of oxidized material, which basically means it rusts and unevenly gets a little bigger due to the process of rusting. Copper and its alloys, however, often corrode anywhere from a bright green to a forest green, depending on the presence of other elements. There are of course many different types of corrosion encountered with metals in archaeological contexts, but these are often the most common and the most easily identifiable corroded metals. Glass corrodes differently, as it begins to break down into incredibly thin, brittle layers in a process called lamination. The materials in the glass itself, along with this splitting of layers, often produces iridescence. These layers each refract, or bend, the light which splits it into many colours. If you were to place glass laminated in this manner in water (DO NOT if it is archaeological, I’m just saying if you were to) the water would fill in the very tiny air holes between layers and allow most light to pass back through. This is why when you are (carefully) washing archaeological glass, it sometimes looks un-corroded temporarily.

Our next task is to register and pot-mark (literally write finds numbers on) all the ceramic material still in post-ex. I’ll talk a bit about pot-marking in next week’s blog. So long!