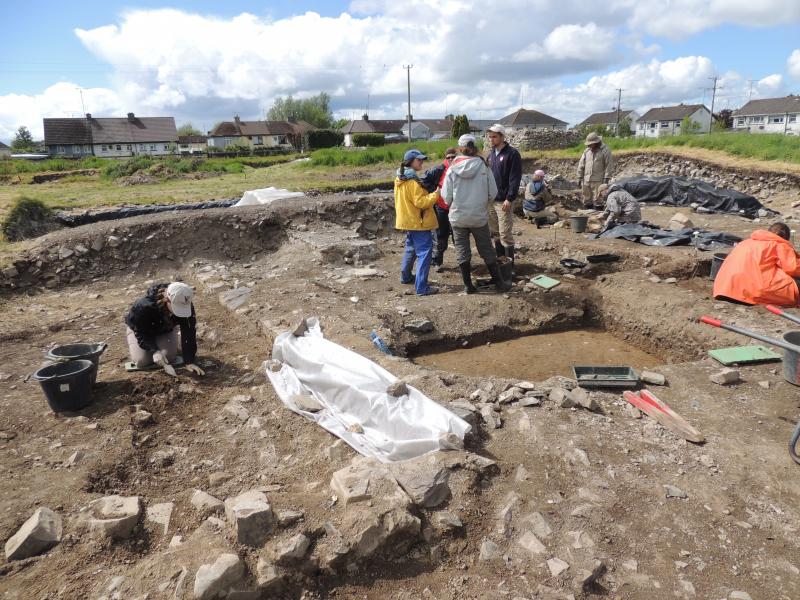 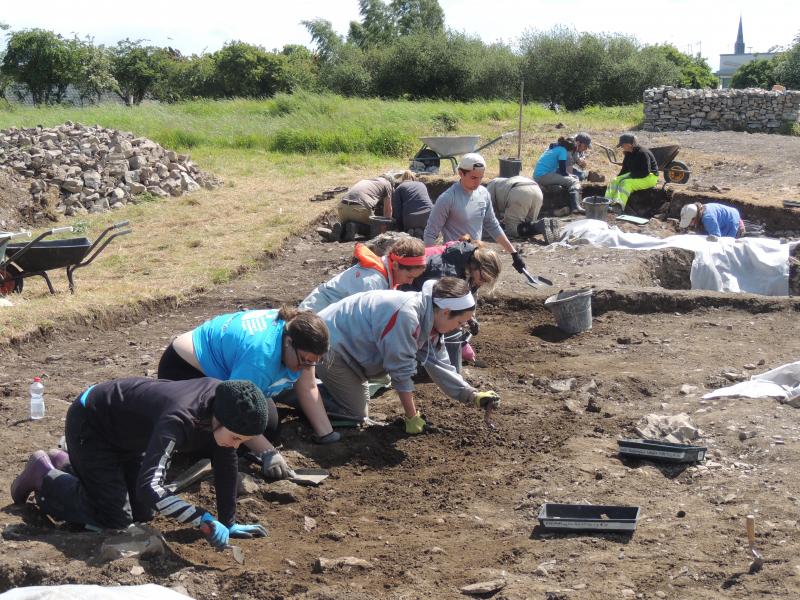 Catch up with the first ten weeks of the Blackfriary Community Heritage and Archaeology Project’s sixth season. Be sure to read our Student Notebooks and Life in the Field updates, too!

Our first week began with our launch in the library. Everyone had a great time, students, staff, and members of the community alike. We have a group of students from Ohio State University joining us for four weeks. They spent the week in orientations while the IAFS staff prepare the site. This will be the Blackfriary’s 6th season.

Our second week of season went well as our Ohio students began their excavation process. All students were in Cutting 6 and were split up into two groups. One to excavate and one to help move the spoil heap in order to better excavate the Cutting 6 extension. This extension is one of the first to reveal evidence of the domestic life of the friars including tableware and metal artefacts. A medieval line impressed floor tile complete with colored glaze was also discovered. Cutting 10 was opened at the end of the week. Student began clearing back loose spoil and discovered a jawbone with a full row of teeth protruding out of the section baulk. This cutting clean-up also revealed a lot of disarticulated human bone. This has been the start of a promising season.

This week we discovered a copper key among various other artefacts as well as beginning to investigate the possible calefactory, or warming room furnace, used for heating. Students excavated a sondage through the area where the calefactory was located revealing scorched earth. An infant burial has been identified in the south baulk of Cutting 6 and it has been decided that it will be fully excavated immediately due to the shallow depth and vulnerability of the infant skeletal remains. In Cutting 10, burials were identified but will remain in situ until the project bio-archaeologist, Dr. Rachel Scott, arrives onsite in June. Stained glass was also uncovered in Cutting 10 this week.

This was our last week with the Ohio students and fourth week of season. Excavations in Cutting 6 revealed two infant burials, B92 and B94, which were excavated and the sondage was extended to facilitate the lifting of the burials. In Cutting 10 post holes associated with the original scaffolding for the south aisle of the church buttresses were identified by one of the student diggers. This is the result of some impressive archaeological skills as they were only identified by the subtle change in density of the clay. Another possible burial was uncovered in Cutting 10 as students were excavating inside the church area to the presumed medieval floor level.

This week was a rather quiet week as we are in-between student groups. We were able to take the few students still on site up for a visit to the Hill of Ward in Athboy, County Meath. This is a research excavation being carried out by School of Archaeology UCD. The archaeology being uncovered is Irish prehistoric period [2500BCE] in contrast to the medieval context of Blackfriary. Staff and students alike used this opportunity to catch up on paperwork, plans, and double check records. In Cutting 10 students exposed the limits of the foundation trench for the south wall of the church. They also were able to identify a robber trench from the quarry phase.

Bio-archaeologist Dr. Rachel Scott arrived on site this week. Her first task of the season was to assess the number of burials left in situ and reassess the research aims this season. Those burials identified for excavation are chosen due to their strategic location and relation to known archaeological contexts. In Cutting 10 students were working on identifying the medieval ground level outside of the church to better establish the construction phase. Rubble was also removed from the sondage above burial 93.

This week we received our first batch of student from the Institute for Field Research. Students are participating in a five work course as part of their university studies. They were given an orientation and taken on a field to Hill of Tara, Slane, and Bective Abbey. Students were then set various tasks onsite as we began to train everyone in the basic procedures. In Cutting 10, students began to remove a post medieval wall revealing possible flagstones.

This week in Cutting 10 burial 93, a fully articulated, adult, medieval burial was excavated and lifted. It was found cut into the natural outside of the church but it is unclear if this burial dates to before the construction of the south aisle in the 14th century. There is possibly another burial to the immediate south of burial 93 as we can see a staining in the natural of a potential grave fill. To the southeast of burial 93, we have a skull but it is unclear if this is a fully articulated burial. In the Cutting 10 south extension, students began excavating through the medieval pathway. About 2-3 cm below we have uncovered a juvenile skull, but it is unclear if it is an articulated ‘Cillin’ burial. To the south of one of the buttresses we have found what may be steps, though we are unclear on its function as the lower step is below what we believe to be medieval floor level. In Cutting 9 we have exposed what remained of our walking surface at the west end of the church. We have almost fully excavated Feature 932, the foundation trench. Some of the students have started excavating the later stone-lined boundary ditch while the rest of the team are busy working on plans and section drawings. More disarticulated human bone was discovered in the foundation trench as well as in the east end.

This week was quite busy as we prepared for our Medieval Family Day. We had 250+ attendance. We provided onsite catering, expert tours, exhibit of artefacts, and a DigitKids section. We also had Edward Byrne, from Traditional Lime Company, come and do demonstrations on the use of local lime in the friary’s construction. During the rest of the week our students kept working in their given sections. In Cutting 10 the juvenile skull mentioned last week was discovered to be DHB. The students then continued to excavate in that extension and found a potential infant burial. South of burial 93, burial 95, a fully articulated adult, has been discovered and is currently being excavated. In Cutting 9 the student have begun a mid-ex plan of the whole cutting (in two parts). A section drawing was also down of the foundation trench along the west wall of the church. Excavation of the basal fill of a later boundary ditch has begun in the eastern perimeter of the cutting. East of the foundation trench student are getting down to the natural, producing DHB, painted plaster, and large amounts of roof slates. As we are at the church floor level students must be careful as there might be potential burials uncovered.

This week we were as productive as the weather allowed. In Cutting 10 students have been doing a plethora of recording. It was also decided that Cutting 10 will be extended to the south as the cutting is getting too deep, and we wish to better understand the stratigraphy of the context besides the stairs. Burial 95, a fully articulated adult (possibly female), has been lifted. This burial was particularly interesting as nails were discovered around it, evidence for a coffin, but was also disturbed by a mortar material causing disintegration of the bone around the feet and right arm. This whitish substance will be collected as a sample for further testing. A medieval infant burial was also excavated in Cutting 10 and was truncated at the legs. This burial is believed to be medieval as the level corresponds with that of the medieval context and it was located below the medieval pathway leading to the door of the church. In Cutting 3 there is a fully articulated adult burial currently being excavated. This is definitely a medieval burial as Cutting 3 contains the nave of the church where well-off members of the laity would have been buried. In Cutting 9 a lot of planning has occurred and a section drawing has been done of the east facing side of the foundation trench of the west wall of the church. This still incorporated the remains of a column base of the church. After the planning was finished, students began to excavate the east end of the cutting within the church floor. They are carefully pulling back each layer as there have been burials in this area in past season. So far this has been producing adult and juvenile disarticulated human bones.