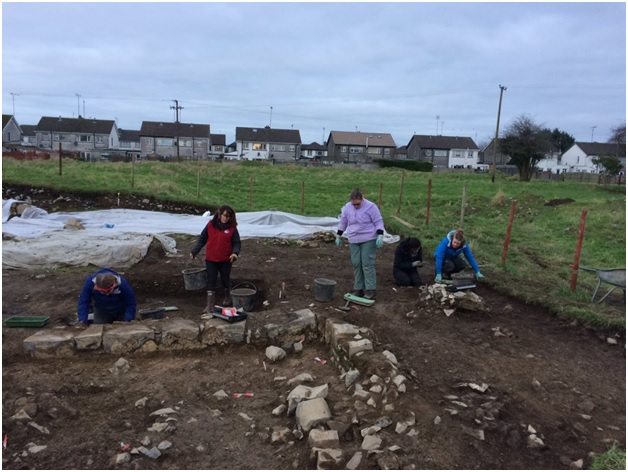 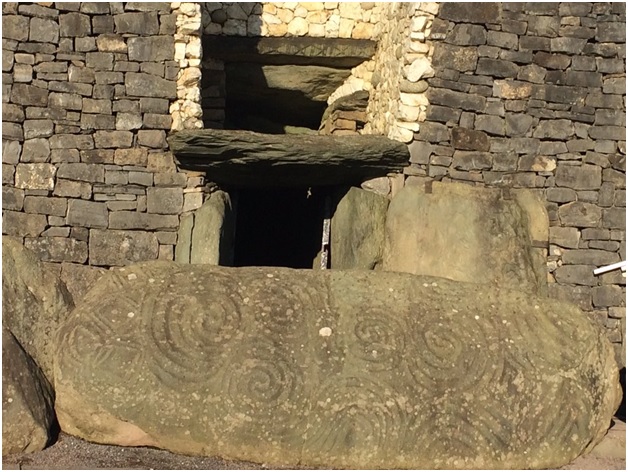 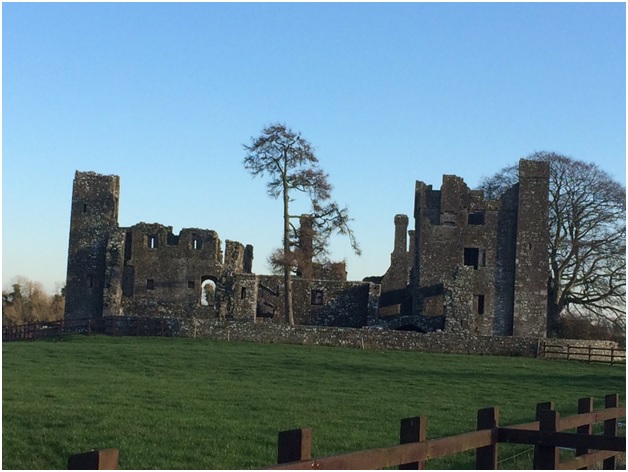 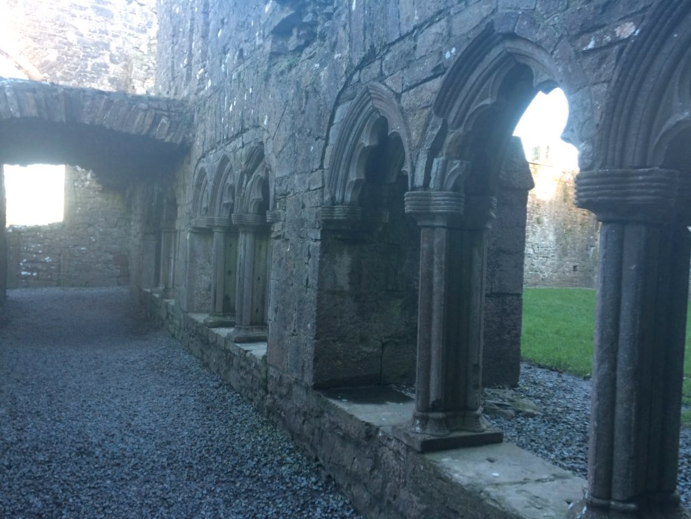 In the fourth in a series of weekly blogs, IAFS/Learn intern Lauren Nofi reports on the progress of the winter program, including what is happening in excavation and post-excavation, and the field trips through the Boyne Valley.

Helloooooo! Week 2 of our winter session started with some more cleaning (via trowel) all the surfaces in the southeastern part of Cutting 6. We also finished up making the southern half of our area level with the rest of the cutting. This area includes the chapter house which has low walls and remnants of a bench still standing to demarcate it. We also have a few brief courses of other walls, one of which included Purbeck marble, and another which may have been a garden wall. In addition to all of this, there is rubble from the collapse of bits of wall, which we have carefully been cleaning.

Common to many monastic establishments, one room would serve as a chapter house, where the brethren would assemble and listen to the rule of their order and hold other meetings associated with the operation of the site. In our chapter house, we believe we have signs of a bench which would have run along the base of the walls of the room to offer seating in-the-round for the religious. One thing which makes Blackfriary so special is the presence Purbeck marble, which is a type of limestone full of fossils which produce a unique pattern when polished. This marble was imported from the Isle of Purbeck, in Dorset, England, and thus tells us about the wealth and the prestige of our site; in fact, ours is the only friary known as yet in Ireland to include such marble. Students working in Cutting 6. The low wall delineates the remains of our chapter house.

Our aim was to clean the entire southeast area of the cutting to take photos and begin planning. Archaeological photos are a bit different from just our usual habit of point-and-shoot. Each photo must be recorded in a register, and within the photo itself we must also identify the site, features involved, and date. We also add a north arrow to help orient the viewer and ranging rods which help depict scale. Photos are best when taken directly over a feature, so as not to skew or overemphasize one area (Oblique photos however can be helpful in some specific cases, such as to demonstrate shade/light behavior with respect to upstanding features). By Thursday, we were ready to begin planning. We used measuring tapes to find grid coordinates which we transferred to our drawing sheet. We also employed a planning frame, which comprises simple wood and string devise to help us copy what we see on the ground onto our prepared drawing sheets.

In addition to all of this drawing, we measured the elevation of many points within our area to depict things like depressions and slopes. In addition to these undertakings, we were also very lucky to have a special guest spend a few days with us and teach us about some surveying methods: Áine Coady is an expert in differential GPS surveying with an archaeological background. We learned how to operate a DGPS system, while also gathering GPS data for the project. What had from afar seemed a complicated, specialist task was actually made quite accessible for the students and myself thanks to Áine’s efforts. Many thanks to her for a very interesting foray into survey! Newgrange (above) and two of the decorated kerb-stones.

Lastly I’d like to talk about this week’s excursion: Newgrange and Bective Abbey. Newgrange is a megalithic passage tomb dating to approximately 5000 years ago, and is part of the UNESCO World Heritage Site of Brú na Bóinne (Gaelic for the palace of the Boyne). I’ve visited before, but it still brings chills when you see the stark white reconstructed façade and the triple spiral on the entrance stone. Squeezing through the passage into the inner cruciform chamber feels like time travel, and glancing up at the corbelled ceiling supporting thousands of pounds of rock and earth really makes one appreciate the scale of such a construction. Newgrange (above) and two of the decorated kerb-stones. The entrance to Newgrange; note the triple spiral. The box over the entrance allows sunlight to penetrate the inner chamber and illuminate the carvings inside on the winter solstice.

Bective Abbey is a 12th-century abbey, located about 7km (4.5 miles) to the northwest of the Blackfriary, now mostly ruins but with a beautiful partially preserved cloister. The buildings had been added to and renovated, as it was eventually used as a fortified private house. This abbey allowed us to see again firsthand monastic architecture, this time of the Cistercians whose aesthetic differences to the Dominicans seem to echo in their architectural differences. Bective Abbey Caption: Cloister wall from the ambulatory, the walkway around the cloister.

So we had a very exciting but very busy week on-site, as well as a really unique field trip where we saw both Neolithic and Norman-era constructions: we spanned about four thousand years of history! Hope to have some more pictures of the planning process, which I will discuss a bit more next week as we finish up mapping our open area of the cutting. We’ll also begin excavating some of our features, so stay tuned!