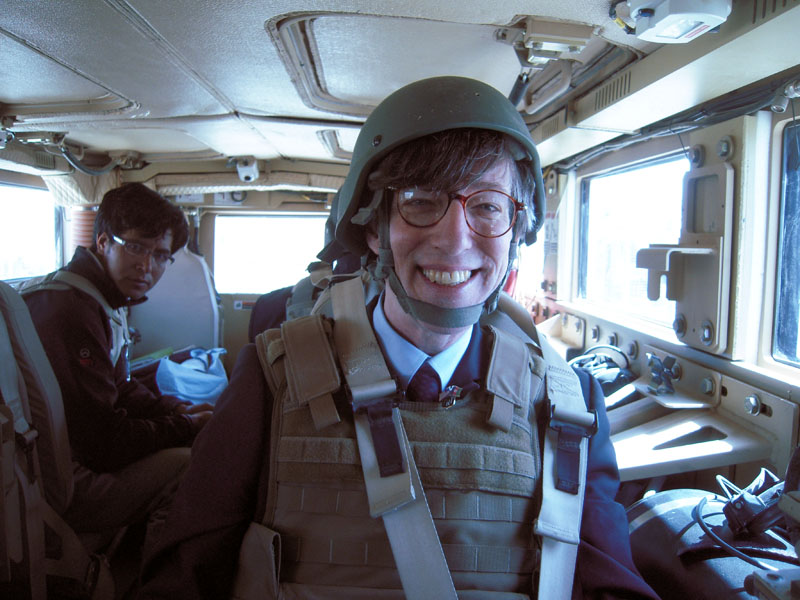 Early this morning we boarded a military helicopter and flew to Ghazni, nearly 150 km to the southwest of Kabul. The flight took us over the Hindu Kush mountains, which had been crossed by Alexander over 2,300 years ago. We’re staying just outside of Ghazni at a PRC (Provincial Reconstruction Center), which contains a mix of Polish and American soldiers. Today’s primary focus involved meetings with the governor of Ghazni province, and the plans for 2013 when Ghazni will be celebrated as the capital of Islamic Culture.

Many of you will be unfamiliar with Ghazni (as was I, one month ago), but between the 10th and 12th centuries, Ghazni constituted the center of an empire that ruled northern India, Persia, and much of central Asia. The ruler of the empire around the year 1000 A.D. was Sultan Mahmud, a great patron of the arts and architecture who was famous for his gardens, mosques, and palaces. The Ghaznavid empire featured some of the most important intellectuals of the time, including the poet Ferdowsi, who worked for Mahmud; Al Buruni, who is often called the first anthropologist; and Ibn Sina (Avicenna), whose books on medicine were used for at least 600 years.

This is a much more dangerous region than Kabul, so body armor and helmets were required as we made our way into the city. The Governor of the province, Musa Khan, had called a press conference and had invited the city council. Several members of the council spoke, highlighting the problems of unemployment, the Taliban insurgency, and illiteracy. Education is high priority here as is the conservation of the city’s monuments. There were speeches by members of the Hayward-Ghazni sister-city alliance, and by me, after which the governor invited us to a sumptuous lunch with many of the council members. After the lunch I had an opportunity to speak with the governor, and was deeply impressed by his plans for the area’s future, as well as his emphasis on education for children of both genders. The council members consistently stressed that the foreign provincial reconstruction teams wouldn’t be here forever, and the population needed to work harder and forego any ethnic rivalries. It was a message of great hope and was received as such by the members of the audience, and by us.

We later toured a new learning resource center in Ghazni that had been funded by the U.S. Embassy and was scheduled to open officially in a few weeks, although it was already filled with Afghan children. One of them, who cannot have been more than 10, was designing a new house on the computer, using a program that I would have had difficulty handling. The incredibly long hours put in by members of the PRT are clearly paying off, and we owe them a debt of gratitude. I single out, in particular, Laura Tedesco, Cultural Heritage Program Manager at the US Embassy in Kabul, and Stetson Sanders, Senior Civilian Representative at the U.S. PRT in Ghazni. Many of us lecture about cultural heritage protection; they are working around the clock in the field to make it happen.