Dispatches from the AIA – March/April 2015 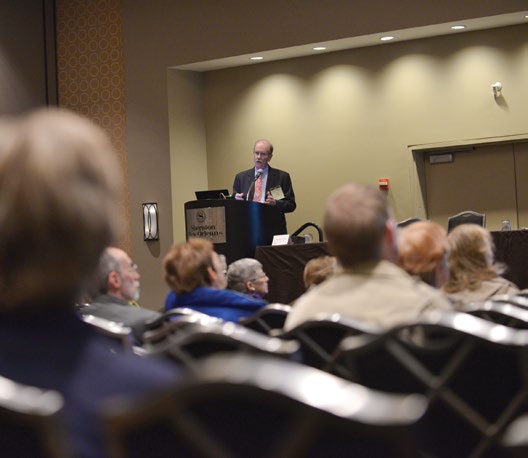 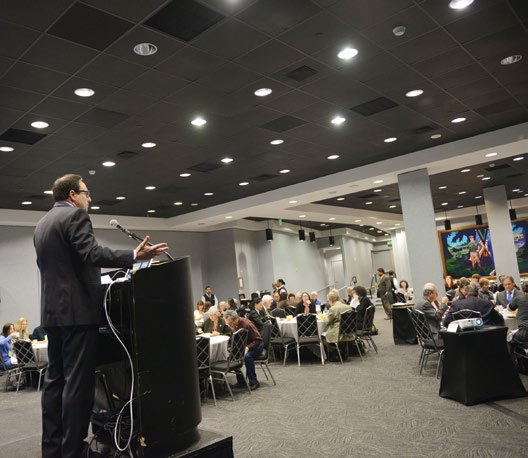 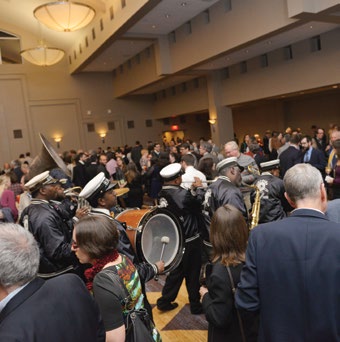 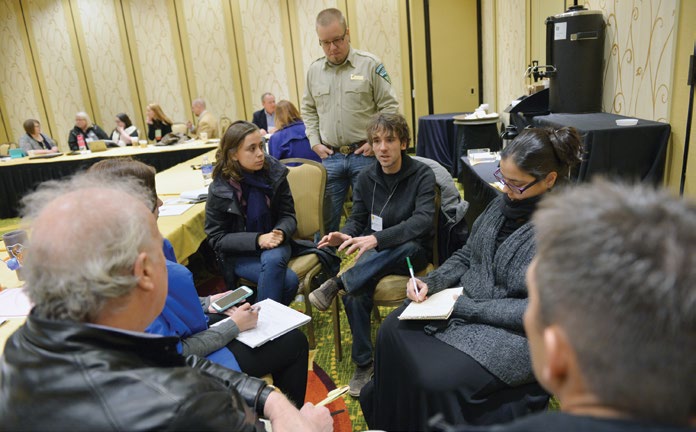 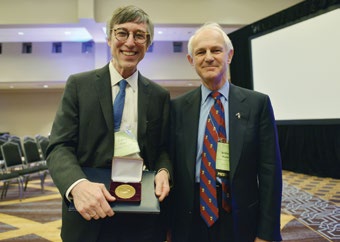 2,600 Archaeologists and Classicists Meet in New Orleans for AIA-SCS Meeting

The 116th Joint Annual Meeting of the Archaeological Institute of America (AIA) and the Society for Classical Studies (SCS) brought together more than 2,600 archaeologists, classicists, educators, and exhibitors for a four-day extravaganza of presentations, discussions, and opportunities for networking and socializing. With more than 100 colloquia, workshops, and roundtables, the 2015 meeting featured the largest academic program in the long history of the event. The program was notable for the breadth and diversity of its session topics, ranging from human evolution to the effect of current conflicts on cultural and material heritage.

Several sessions and workshops focused on the role of technology in archaeological research, including the opening night public lecture presented by Miriam Stark of the University of Hawaii. Her talk, “Imagining Angkor: Politics, Myths, and Archaeology,” focused on the ways remote sensing techniques are changing the way we visualize and understand the ancient city of Angkor, capital of the Khmer Empire from the ninth to the fifteenth centuries a.d. Other lectures focused on the use of digital tools to curate archaeological data and the use of 3-D imaging as a way to digitally preserve and interpret archaeological heritage. These techniques and tools are making archaeological information available to anyone, anywhere, with access to a computer and the Internet.

Each year, the Annual Meeting provides an opportunity for archaeologists to present recent discoveries and new interpretations of the archaeological record. It also provides a setting in which to examine important current issues and challenges. At the Presidential Plenary Session, researchers discussed the latest findings from the site of Dmanisi in Georgia and their impact on our perception of early human movement out of Africa. Other lectures touched on major concerns such as threats to archaeological sites and museum collections in areas of conflict and archaeologists’ responses to those threats.

Special events included a lightning session for undergraduate presentations, the meetings of affiliated societies, networking receptions, and, for the first time, a conference for archaeology and heritage educators from around the United States and Canada. Representatives from AIA Local Societies congregated at the Society Representatives Breakfast to review the past year, recognize outstanding programs and individuals, share ideas, and socialize.

The Annual Meeting is the Institute’s largest academic event and an opportunity for archaeologists to exchange knowledge and information with their peers. Each year the meeting grows larger, with more sessions, attendees, and special events. If you missed the 2015 meeting, please join us next year in San Francisco, January 6–9, 2016, for the 117th AIA-SCS Joint Annual Meeting. Visit the AIA website, www.archaeological.org, to find out how you can participate. The AIA and SCS released a dedicated meeting app at the New Orleans meeting. The app, available for iOS, Android, and web, enabled meeting attendees to navigate the program and create customized schedules. The app included both the AIA and SCS programs, venue maps, information about the exhibit hall, messaging capabilities, and general information about the conference. Feedback from meeting attendees was overwhelmingly positive. If you were unable to attend but would like to get a detailed look at the meeting’s offerings, the app remains live and can be accessed at www.archaeological.org/meeting/app

More than 40 people, including museum specialists, K–12 teachers, and federal employees from around the country participated in the AIA-organized conference for archaeology and heritage educators, “Building a Strong Future for Archaeological Outreach and Education.” The two-day conference was created to allow these dedicated and enthusiastic professionals to evaluate the current state of heritage education and plan for the future.

The idea for the educators’ conference emerged out of discussions held at various events, including the meeting of the Society for American Archaeology (SAA), meetings of the SAA’s Public Education Committee, and an AIA-organized education summit at Boston University. The main goals of the conference were to create a network of archaeology and heritage educators who can work in a supportive and collaborative manner to build a strong future for archaeology, make educators aware of what their peers are doing and what resources are already available, and connect newcomers to archaeological education with their more experienced colleagues.

Forgoing the traditional conference format of paper presentations, the program instead was interactive, consisting of panel discussions, roundtables, and workshops. Topics included establishing ethical guidelines for outreach programs and the diversity of state and regional approaches to outreach, evaluation, marketing, and sustainability. Topics were chosen through a survey of more than 100 educators from around the country. The conference proceedings are currently being compiled and will be made available online.

We plan to make the AIA educators’ conference a regular event and have already begun planning the 2016 meeting. By providing a forum for these conversations, the AIA reaffirms its commitment to informing and educating the public about archaeological heritage.

Exceptional work in archaeology and archaeological education is highlighted each year at the AIA Awards Ceremony. The individuals and groups invited to the ceremony are recognized for their efforts to further the discipline of archaeology, educate both professionals and laypeople, and safeguard cultural heritage. These award winners inspire their peers, students, and the public, and demonstrate best practices in the field. The 2015 winners included

C. Brian Rose, University of Pennsylvania, Gold Medal Award for Distinguished Archaeological Achievement for his work in the field at Troy, the Granicus River Valley Survey Project, and Gordion; his visionary and energetic efforts to provide cultural heritage training to the members of the U.S. military serving in Iraq and Afghanistan; and his highly influential role as an educator, formerly at the University of Cincinnati, and currently at the University of Pennsylvania.

T. Douglas Price, University of Wisconsin, Pomerance Award for Scientific Contributions for his influence on the field of archaeological science, including research that has revolutionized our understanding of the European Mesolithic, the transition to agriculture, and human migration throughout the world.

Connie Rodriguez, Loyola University, Martha and Artemis Joukowsky Distinguished Service Award for 25 years of dedication to the AIA and the AIA Local Society in New Orleans and her invaluable assistance each time the AIA Annual Meeting has been held in New Orleans (1992, 2013, and 2015).

Allan Meyers, Felicia A. Holton Book Award for Outside the Hacienda Walls: The Archaeology of Plantation Peonage in Nineteenth-Century Yucatán (The University of Arizona Press, 2012), an exemplary statement on how archaeology can be used to support modern historical and ethnological research.

Nancy T. de Grummond, Florida State University, Excellence in Undergraduate Teaching Award for over 30 years of dedicated teaching that brings the immediacy of new ideas and discoveries directly into the classroom and instills in her students a passion for original research.

Elizabeth Pye, University College London, Conservation and Heritage Management Award for her groundbreaking efforts in transforming the field of objects conservation into a science-based discipline, and for over four decades of teaching, mentoring, and inspiring hundreds of students from around the world.

Temple of the Winged Lions Cultural Resource Management Initiative, Best Practices in Site Preservation Award for designing a project to stabilize, conserve, and protect the monumental temple and its precinct; rehabilitate the surrounding landscape; develop and implement a comprehensive presentation strategy for the building and its environs; publish the data derived from both the original excavation and the new project; develop guidelines and manuals for different aspects of cultural resource management work; and build local capacity for undertaking CRM efforts.

The Ancient World Online and Charles E. Jones, Pennsylvania State University, Outstanding Work in Digital Archaeology Award for work on open-access material relating to the ancient world and for presenting archaeological information to more than 1.1 million unique visitors to the site, ancientworldonline.blogspot.com, since its inception in 2009.