Sponsored by: Friends of AIA-New York

La Fonteta is a site of urban character dated in the Early Iron Age (8th-6th centuries BC). It is placed on a coastal promontory next to the mouth of the river Segura. Archaeological excavations carried out from 1996-2002 and then from 2018-2019 have provided a settlement sequence from the late 8th to the third quarter of the 6th century BC. The earliest phases of the site show heavy craft and metallurgy activity, besides houses of several rooms built with clay and mudbrick walls organized in an urban layout. A strong defensive system was built c. 600 BC and a new urban layout. The houses of this new phase show one or two rooms, although some of them are more complex. There were open areas between these buildings with worship areas, communal bread ovens, and garbage dumps. La Fonteta also was an important port which funneled a heavy trading activity, as evidenced by the rich material culture attested, with a varied assemblage of pottery with several types and origins, a heavy manufacturing of metallic items, as well as prestige goods, some of the very exotic such as ostrich eggs, ivory items, necklace beads, or scarabs. 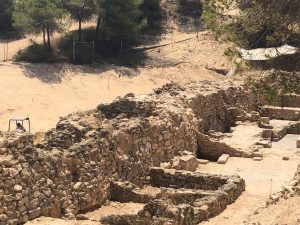 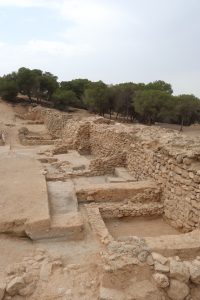