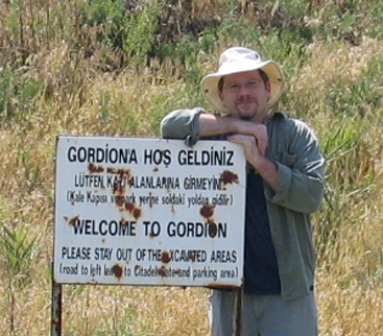 Andrew Goldman is Professor of History with Gonzaga University.  He received his degrees from Wesleyan University and the University of North Carolina, Chapel Hill (M.A. and Ph.D. in Classical Archaeology), and his research interests include Roman Anatolia, the Roman military, and Roman pottery.  Professor Goldman has worked at many sites throughout Turkey, including Çatal Höyük, and since 1992 he has been working at the ancient site of Gordion; the finds at Gordion are some of the earliest Roman military equipment excavated in the Roman East, and the site is the only Roman military base of its period to ever have been explored in Turkey.  Professor Goldman is also Field Director for the Sinop Archaeological Research Project in Turkey.  Current publication projects include Roman Gordion (in preparation, to be published as part of the Gordion Monograph Series, University of Pennsylvania Museum).

The Intriguing Case of the Octagonal Gemstones from Roman Turkey

A fascination with ancient gemstones goes back to ancient times, when luminaries like Julius Caesar and Hadrian were avid collectors of rare and historically important gems.  During the Roman Empire, however, the precious or semi-precious carved seals (intaglios) used for both private and business purposes were a ubiquitous part of daily life.  A wide range of symbols were carved on these gems (e.g. gods, animals, magical creatures), with the specific choice of engraving due to one or multiple factors: to denote ownership, an advertisement for one’s piety, as a symbol of fellowship, love or remembrance, as a magic charm, or even to demonstrate a sense of humor (often as a pun on a name).

Within the vast corpus of Roman gemstones published from museum and private collections, relatively few gemstones have a secure archaeological context, which makes it difficult to say anything definitive about their origin, production or dissemination.  Among such collections, eight-sided intaglios remain exceptionally rare, enough so that their specific shape is excluded from standard typological charts of diagnostic forms.  Examples of this type – typically dated between the 2nd and early 5thcenturies AD – appear to have become increasingly popular in the Late Antique period, with octagonal intaglios displaying a wide range of early Christian symbols and inscriptions.  While their exact provenance has remained elusive, several recent catalogs have supplied a general designation of ‘Turkey’ or ‘Anatolia’ as their place of origin.

Excavation of the Common Cemetery at Gordion in central Turkey during 1950s and 60s unearthed a series of Roman graves that contained nine rings of gold, silver, iron and bronze with carved intaglios typical of 2nd to 5th centuries AD.  The group included three of octagonal gemstones, providing this rare type with a secure archaeological context.  The Gordion finds have raised the possibility that this particular gemstone type was produced and locally disseminated in central Anatolia, most probably by a workshop catering to both pagan and early Christian patrons within one of the region’s urban centers like Ancyra or Caesareia.  Since early Christian (pre-4thcentury AD) archaeology is a field that still remains largely under-investigated, these gems provide an important glimpse into how people adapted to changing religious and social conditions in central Turkey under the late Roman Empire.

On 10 March, 241 BCE, the final naval battle of the First Punic War was fought off western Sicily, where a large Roman fleet engaged an equally large Carthaginian fleet near the Aegates Islands.  The ancient historian Polybius tells us how the Romans won a decisive victory and forced the Carthaginians to sue for peace shortly thereafter.  Almost 2300 years later, the site of the battle has been located off Levanzo Island (in the modern Egadi Islands group), and its landscape has been carefully surveyed by RPM Nautical Foundation and Sicily’s Soprintendenza del Mare.  By the end of 2014, eleven warship rams, eight of helmets and a wide scatter of artifacts had been recorded on the sea floor, at the first maritime battlefield from ancient times which has ever been explored.

This lecture will discuss the ancient battle as we understand it from surviving literary sources like Polybius and will present what the new archaeological finds have revealed about the conflict and its combatants, the early legionaries of Rome and the mercenary forces of Carthage.  Fieldwork at this maritime site has not only produced some of the earliest Latin inscriptions and Roman iconographic representations ever discovered, but also a series of helmets of the early Montefortino type, what are arguably the most successful piece of equipment ever developed, in use for nearly 500 years.  These mid-3rd century B.C. finds are not only helping us to understand the use and production of Roman armor, but are also permitting us to reexamine the development of the Roman military during its most important, formative years under the Republic.  In addition, one of the newly recovered helmets is likely to be of Carthaginian origin, a discovery that is providing new insight into how Rome’s greatest ancient adversary once waged war.