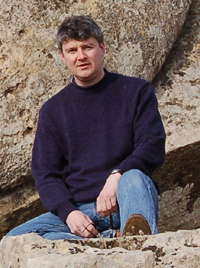 Andrew Meadows is a specialist in the history, numismatics and epigraphy of the Hellenistic Greek world. From 1995-2007 he was Curator of Greek Coins at the British Museum, in 2007 he was a member of the Institute for Advanced Study in Princeton, and in the same year he became Margaret Thompson Curator of Greek Coins at the American Numismatic Society (ANS). In 2008 he was appointed Deputy Director of the Society. In 2012 he was elected to the Kraay Visitorship at Wolfson College and a Robinson Visiting Scholarship at the Ashmolean Museum, Oxford. In 2014/2015 he will be the Archaeological Institute of America’s Metcalf Lecturer.

From 1998-2006 he was Secretary of the British Academy’s Sylloge Nummorum Graecorum Committee, and in 2013 he was appointed Director of the international SNG project. From 2002-2005 he served as Honorary Secretary of the Royal Numismatic Society.

Dr Meadows was co-curator of the HSBC Money Gallery at the British Museum and has curated and contributed to a number of temporary exhibitions, including Earlier Monetary Unions, From Alexander to Mark Antony: Images of Power on Ancient Coins and Brief Lives. The Changing Currencies of Western Europe (at the British Museum), History Re-stored: Ancient Greek Coins from the Zhuyuetang Collection (at the Hong Kong Museum of History), and the traveling exhibitions Cleopatra of Egypt: From History to Myth and Forgotten Empire: the World of Ancient Persia. He is currently a member of the Conseil Scientifique of the Achemenet project.

Dr Meadows has written and edited more than 100 books and articles, including three volumes in the Sylloge Nummorum Graecorum series and Coin Hoards IX and X. He is Series Editor of the joint ANS-Cambridge University Press Guides to the Coinage of the Ancient World and the editor of the American Journal of Numismatics. He is currently working on a collaborative project to digitise the Inventory of Greek Coin Hoards, is co-director of Online Coins of the Roman Empire (OCRE), and is a member of the steering committee of the Nomisma project. He is finishing a book-length study of the development of civic coinage in Hellenistic Asia Minor.

Dr Meadows also teaches Greek and Roman numismatics for Columbia University in New York, and is working with the Institut Européen d’Archéologie Sous-Marine and the Oxford Centre for Maritime Archaeology on the publication of material from the excavations at Herakleion, East Canopus and Alexandria in Egypt.