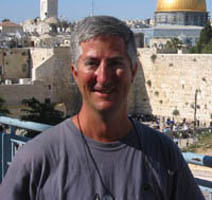 Eric Cline is Professor of Classics at the George Washington University, Director of the GWU Capitol Archaeological Institute, and former Chair of the Department of Classical and Near Eastern Languages and Civilizations Department at GWU.  A National Geographic Explorer and Fulbright Scholar, with degrees from Dartmouth, Yale, and the University of Pennsylvania, he is an active field archaeologist with 30 seasons of excavation and survey experience in Israel, Egypt, Jordan, Cyprus, Greece, Crete, and the United States, including ten seasons at the site of Megiddo (biblical Armageddon) in Israel and eight seasons at Tel Kabri, also in Israel, where he is currently Co-Director.  Winner of the 2014 “Best Popular Book” award from the American Schools of Oriental Research for his recent book, 1177 BC: The Year Civilization Collapsed, a three-time winner of the Biblical Archaeology Society’s “Best Popular Book on Archaeology” Award (2001, 2009, and 2011), and a popular lecturer who has frequently appeared on television documentaries, he has also won national and local awards for both his research and his teaching.  Dr. Cline is also one of the 36 inaugural NEH Public Scholars announced in July 2015; the Public Scholars program is a major new initiative designed to promote the publication of scholarly nonfiction books for general audiences, and Professor Cline was chosen for his upcoming work on “Digging up Armageddon: The Story of Biblical Megiddo from Canaanites to Christians”.  Dr. Cline was an AIA Norton Lecturer for 2018/2019.

See Eric Cline’s work in the American Journal of Archaeology:

Of Canaanites and Kings: The Ongoing Excavation of a Middle Bronze Age Palace at Tel Kabri, Israel

Excavations and survey from 2005-2011 at the site and environs of Tel Kabri, located in the western Galilee of modern Israel, have shown that the Middle Bronze Age Canaanite palace there is at least twice as large as previously thought, with much still remaining to be excavated. The palace is painted with what may be the earliest-known western art in the Eastern Mediterranean, for it is the earliest of the four known sites in Egypt and the Near East (Alalakh, Qatna, Daba, and Kabri) that have palaces decorated with frescoes painted in an Aegean manner, probably by Cycladic or Minoan artists. A highlight of the 2009 season was the discovery of nearly 100 fragments of plaster, 60 of which are painted, from both a previously-unknown Aegean-style wall fresco with figural representations and a second Aegean-style painted floor. Finds from the 2011 season will also be discussed, including additional fragments of painted plaster and a monumental structure with in situ orthostats, which may be a temple located right next to the palace.

For more than three hundred years during the Late Bronze Age, from about 1500 BC to 1200 BC, the Mediterranean region played host to a complex international world in which Egyptians, Mycenaeans, Minoans, Hittites, Assyrians, Babylonians, Cypriots, and Canaanites all interacted, creating a cosmopolitan and globalized world-system such as has only rarely been seen before the current day. It may have been this very internationalism that contributed to the apocalyptic disaster that ended the Bronze Age. When the end came, as it did after centuries of cultural and technological evolution, the civilized and international world of the Mediterranean regions came to a dramatic halt in a vast area stretching from Greece and Italy in the west to Egypt, Canaan, and Mesopotamia in the east. Large empires and small kingdoms, that had taken centuries to evolve, collapsed rapidly. With their end came the world’s first recorded Dark Ages. It was not until centuries later that a new cultural renaissance emerged in Greece and the other affected areas, setting the stage for the evolution of Western society as we know it today. Blame for the end of the Late Bronze Age is usually laid squarely at the feet of the so-called Sea Peoples, known to us from the records of the Egyptian pharaohs Merneptah and Ramses III. However, as was the case with the fall of the Roman Empire, the end of the Bronze Age empires in this region was probably not the result of a single invasion, but rather of multiple causes. The Sea Peoples may well have been responsible for some of the destruction that occurred at the end of the Late Bronze Age, but it is much more likely that a concatenation of events, both human and natural — including earthquake storms, droughts, rebellions, and systems collapse — coalesced to create a “perfect storm” that brought the age to an end. In this illustrated lecture, based on his book of the same title (1177 BC: The Year Civilization Collapsed; Princeton University Press, 2014) that was considered for a 2015 Pulitzer Prize, awarded the American School of Oriental Research’s 2014 prize for “Best Popular Book on Archaeology,” and is being translated into fourteen foreign languages, Professor Eric H. Cline of The George Washington University will explore why the Bronze Age came to an end and whether the collapse of those ancient civilizations might hold some warnings for our current society.

Apocalypse. Judgment Day. The End Time. Armageddon. Students of the Bible know it as the place where the cataclysmic battle between the forces of good and the forces of evil will unfold. Many believe that this battle will take place in the very near future. But few know that Armageddon is a real place—one that has seen more fighting and bloodshed than any other spot on earth. The name Armageddon is a corruption of the Hebrew phrase Har Megiddo, and it means “Mount of Megiddo.” Based upon his experiences while participating in ten seasons of excavation at the site and using material from both his book that was awarded the BAS 2001 prize for “Best Popular Book on Archaeology” (The Battles of Armageddon: Megiddo and the Jezreel Valley from the Bronze Age to the Nuclear Age; University of Michigan Press, 2000) and a forthcoming book from Princeton University Press entitled Digging Up Armageddon, Dr. Cline will present an illustrated overview of the excavations that have taken place at the site during the past century, up to the present day. Unresolved questions including the palace, stables, and other ruins initially attributed to King Solomon’s building activities and the extent of King David’s involvement at the site will be re-examined, as will some of the numerous battles that have already been fought at Armageddon.

The Battles of Armageddon: Megiddo and the Jezreel Valley from the Bronze Age to the Nuclear Age; University of Michigan Press, 2000

See Eric Cline's work in the American Journal of Archaeology.