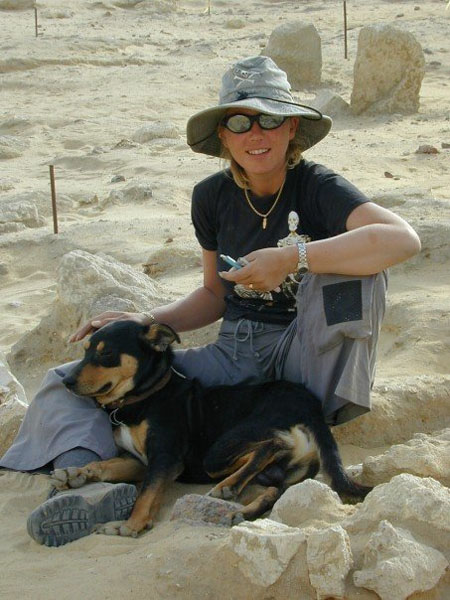 Jessica Kaiser is an Adjunct Assistant Professor of Anthropology at Saint Mary’s College of California. She holds an MA in biological anthropology from the University of Stockholm, Sweden, with minors in Classics and Egyptology from Uppsala University (2006) and a PhD in Egyptian Archaeology and Bioarchaeology from University of California Berkeley (2018). Dr. Kaiser has worked extensively as an archaeologist and surveyor in Egypt, California and Scandinavia, and was the head osteologist for the Giza Plateau Mapping Project/Ancient Egypt Research Associates between 2000-2010, and the Johns Hopkins Mut Temple Expedition between 2015-2016. She directed the bioarchaeology concentration of the AERA/ARCE field school between 2005-2010. She has also worked as a field supervisor and surveyor at the at the UC Berkeley Hibeh Expedition (2006-2009 seasons). Since 2017, she is co-directing the Berkeley-sponsored Abydos Temple Paper Archive Project with colleagues from Egypt and Germany. Her research interests include skeletal evidence of stress and disease, mortuary archaeology, the archaeology of childhood, database development for archaeology and osteology, and Egyptology and the colonial encounter.

Who's your Mummy? Mummification as a Business in Late and Roman Period Egypt

It is often said that the practice of mummification became a veritable business during the Late and Roman periods, when it was extended to include not only the elite, but also those on the lower end of the status scale. The increase in the number of bodies being embalmed led to the widespread adoption of more expeditious techniques, sometimes resulting in mummies that, though outwardly pleasing in appearance, concealed nothing but a jumbled mess of bones beneath their wrappings. The non-elite Late through Roman Period cemetery of the Wall of the Crow at Giza has yielded several examples of such presumed shoddy workmanship. In one example, a coffin contained one primary individual and three additional lower legs. In others, the bodies had been heavily manipulated or were missing altogether. Scholars have often interpreted such ‘fake’ or ‘composite’ mummies as false advertising on the part of the embalmers. However, archaeological finds accompanying the Giza burials and the appearance of some of the coffins suggest that the mourners must have been at least somewhat aware of their imperfect contents, rather than unwitting victims of ‘embalming fraud’, perhaps influencing the way their loved ones were represented in death more than previously thought.

“Children in Death” In: Beaumont, L. and Harrington N. (Eds), Children in Antiquity: Perspectives and Experiences of Childhood in the Ancient Mediterranean, London; Routledge, (2019)

“Bioarchaeology of the Wall of the Crow Cemetery, Giza: Changes in the Levels of Systemic Stress from the Saite to the Roman Period,” American Journal of Physical Anthropology 159 (S62): 188, 2016 (Abstract)