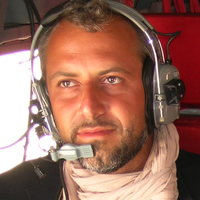 Lorenzo Nigro (Rome 1967), MA, PhD, Associated Professor of Near Eastern Archaeology (since 2002), is the Coordinator of the Oriental Section of the Department of Sciences of Antiquities of Rome “La Sapienza” University (Faculty of Letters and Philosophy). He has participated in several archaeological expeditions in the Near East and the Mediterranean (among which the most renowned are Tell Mardikh/Ebla, in Syria, in 1989-1997, and Tell es-Sultan/Jericho in Palestine as co-director, in 1997-2000). He is presently the Director of Rome “La Sapienza” Expedition to Motya (a Phoenician city in Western Sicily), and the Director of Rome “La Sapienza” Expedition to Palestine & Jordan, which is carrying on systematic excavations at Tell es-Sultan/ancient Jericho in Palestine, where excavations were resumed in 2009, and at the Early Bronze Age (3rd millennium BC) fortified city, previously unknown, of Khirbet al-Batrawy (2005-2011), in the northern district of the Hashemite Kingdom of Jordan.

Lorenzo Nigro is a skilled field archaeologist with a wide experience of Levantine and Mediterranean archaeology. He has written 13 monographs on the archaeology of Palestine (Palatial Architecture, Jericho and Jerusalem), Syria, and the reports of excavations at Motya, Khirbet al-Batrawy and Jericho, and more than 150 articles on Levantine, Phoenician, Mesopotamian and Egyptian archaeology and art history, ranging from palatial and temple architecture, pottery chronology, Levantine and Iranian metallurgy, Sumerian and Akkadian art, Phoenician stratified ceramics, history of excavations, etc.  He is founder and Editor of two series of monographs: Rome “La Sapienza” Studies on the Archaeology of Palestine & Transjordan (ROSAPAT; 7 volumes) and Quaderni di Archeologia Fenicio Punica (QAFP, 6 volumes, including excavations reports Mozia X, Mozia XI, Mozia XII, Mozia XIII).  He has taught in the Lateran University (Rome, 1996-2000) and he has been Invited Professor of Biblical Archaeology at the Pontifical Biblical Institute (Rome, 2000-2006).

Dr. Nigro has been the Curator of the Near Eastern Department (Reparto Antichità Orientali – Museo Gregoriano Egizio/Egyptian Museum) of the Vatican Museums (1998-2005), gaining deep experience in restoration, management and development of archaeological heritage.  He took part in and organized numerous international congresses, conferences and workshops, among which are the First International Congress on the Archaeology of the Ancient Near East (1ICAANE, Roma 1998); the international Conferences held in Jericho in February 2005 and April 2008 by the Palestinian MOTA-DACH and Rome “La Sapienza” University on “Archaeology, sustainable development and tourist valorisation of the archaeological site of Tell es-Sultan/ancient Jericho”. He was a member of the steering Committee of the Sixth International Congress on the Archaeology of the Ancient Near East held in Rome in May 5th – 10th 2008 (6ICAAN); of the congress “Lebanon Symposium” devoted to the enhancement of Lebanese Archaeology and Cultural Heritage, held in Beirut in November 5th-9th 2008; and of the “Second Lebanon Symposium”, October 2012).  He is a member of the Counsel for the International Relationships of Rome “La Sapienza” University.

Dr. Nigro received the “St. Damasus Scholar” Award by the Carsten Niebhur Institute of Archaeology of Copenhagen University as “Young Archaeologist” in 1999 for the excavations at Jericho. In 2010, due to the discovery of the Palace of the Copper Axes in Khirbet al-Batrawy, he received the “Premio Provincia Capitale 2010” and the “Premio Colosseo 2010” awards, as an Italian/Roman who distinguished himself abroad, and the “Sapienza Ricerca 2010” award, as outstanding researcher of Rome “La Sapienza” University.  In 2011 he was awarded National Funds for Relevant Researches (PRIN) for the topic “The Seven Plagues: Catastrophes, Earthquakes, Inundations, Famine, Epidemies, and War in Palestine and Egypt during Pre-Classical periods: an overview of historical and archaeological sources”.

Lorenzo Nigro is presently experimenting with new approaches on the archaeology of the Mediterranean on the island of Motya, where he coordinates an interdisciplinary Laboratory of emerging sciences applied to innovate archaeology with the use of drones, sensor nodes, 3D simulators, etc.

His motto is: “patience, prudence and perseverance”.