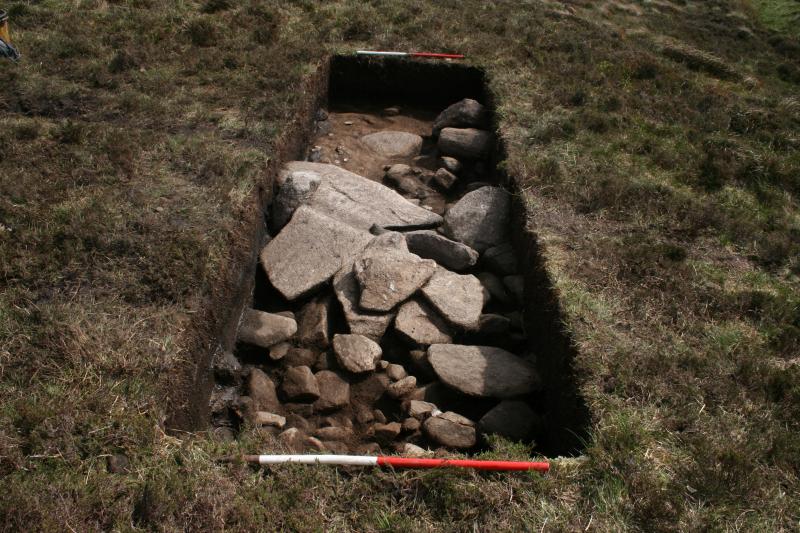 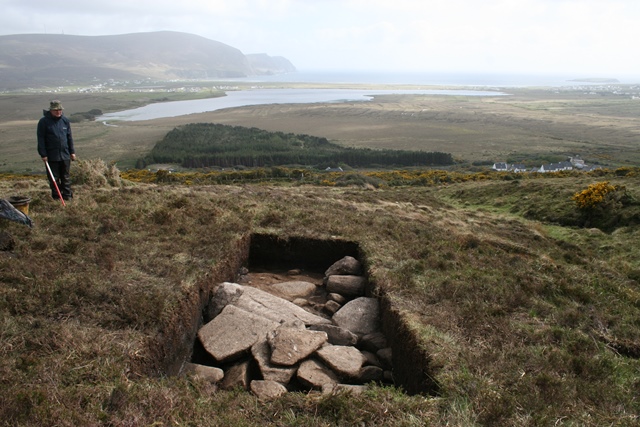 The first week of the new season started on the 18th of May. This was a one week course for archaeologically inclined members of the public and we were joined by Roy, an IT specialist from the UK, and Damien, a road traffic accident investigator from Dublin, and of course Abigail, who has come back to Achill Archaeological Field School for a second year, this time as a Trainee Supervisor. After an introduction session in the Field School’s Lecture Room,  we headed up to Slievemore to begin the excavation at the Cromlech Tumulus site and associated Danish Ditch or prebog field wall.

The goal for this week was to excavate a second trench over the Danish Ditch, a pre-bog field wall that connects the Court Tomb in Keel East townland to the Cromlech Tumulus site. Towards the end of the 2014 season we excavated an initial trench over this feature, but the results were a little underwhelming. We had been expecting to find the remains of a very substantial east to west wall but the size of the wall once we had removed the overlying peat really did little to impress. The problem here is that the Danish Ditch is clearly marked on the 1838 Ordnance Survey map, but today it is scarcely visible and it takes a well-trained eye to follow its course. It is a tribute to the  Ordnance Survey team that were able to spot such a diminutive feature, and its inclusion on the 6 inch map may relate to it being a locally named feature in the landscape. However it is also possible that the wall was simply more prominent in the landscape 180 years ago, making it a more obvious inclusion on the map. This idea finds support in the old maps themselves, where the first edition Ordnance Survey map shows an additional line running southwards from the court tomb, which has disappeared from the second edition map published 60 or so years later. This would certainly be consistent with a process of robbing out the stones to be reused in the expanding 19th century agricultural landscape, although it is not conclusive proof that the feature used to be more prominent… for that we need to excavate!

The trench we excavated this week was a great success, and our initial impressions are that the wall at this point is much more impressive than was the case in the 2014 trench. The wall in the new trench consisted of a line of substantial boulders running diagonally across the trench. To the south there was a small amount of collapsed material, but to the north there was a large build-up of small angular stones. It is possible that this is simply more collapse from the adjacent wall, but perhaps the main row of boulders is simply an external wall face and this material represents a rubble core for a much wider wall. A wide dual faced wall with a rubble core is certainly a design we’ve seen elsewhere on Slievemore, for example connecting to the front of The Middle Bronze Age Roundhouse 2 furtehr to the west. If this really is a wall with two boulder faces and rubble core then we would expect to find a second wall face to the north. Unfortunately our trench was not large enough to determine if this was present, so the trench will need to be slightly extended to the north which we will do with the next group of students.