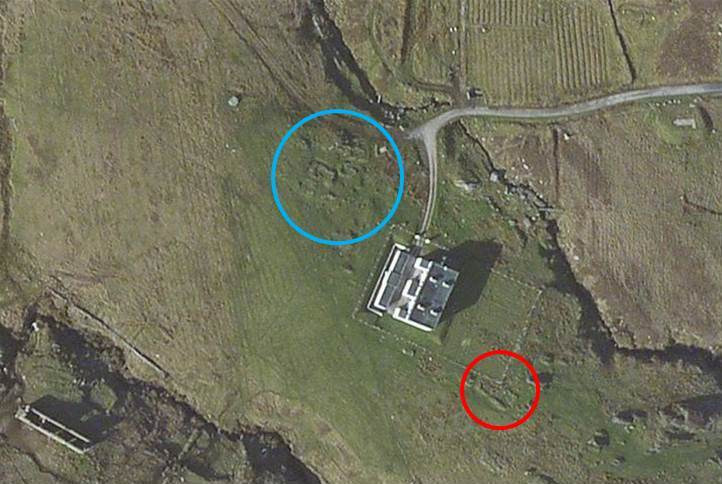 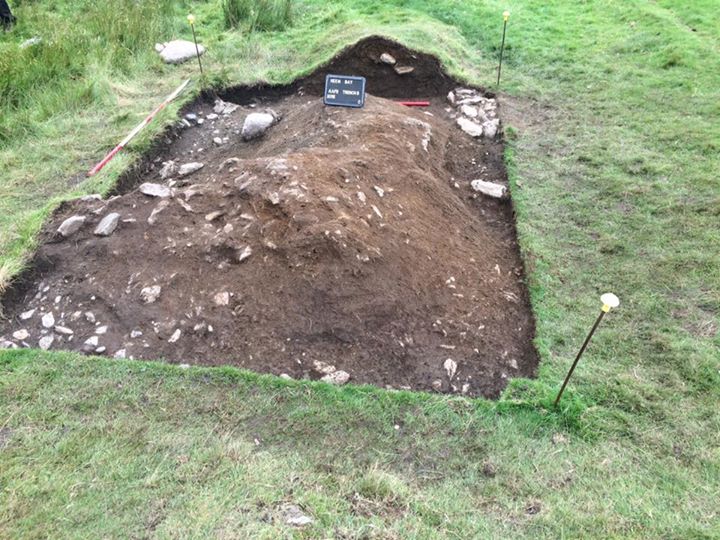 The final two weeks of the 2015 field season saw the excavations taken over by Dr Richard Clutterbuck as the regular Field Director had commitments elsewhere. The last two weeks of each season are always used to run short courses for students from a wide variety of backgrounds, and they always prove to be a lot of fun. Typically we take the opportunity to excavate a number of small trenches to explore interesting looking features in the areas around the main excavation sites, and we continued this formula this year excavating two exploratory trenches around the edge of the settlement area at Keem Bay.

The first of these exploratory trenches measured 3m by 4m and was located over the corner of an interesting looking rectangular foundation to the west of the Coastguard station. This possible structure was defined by a low grassy bank but it had much bigger dimensions than any of the houses within the main settlement cluster, measuring around 14.5m by 7.5m in area. Prior to investigation it was not clear if this was simply an enclosure for holding animals or if it was the remains of a particularly large building of some sort, possibly a larger cottage or perhaps even an earlier Coastguard station. Upon excavation it was found that the perimeter bank was a simple affair consisting of earth with occasional small boulders, quite unlike the buildings within the main settlement where the banks cover over neatly build stone foundations. This strongly suggests the rectangular bank belongs to an animal enclosure rather than another building, and so this small trench proved quite successful, even if it wasn’t necessarily the result we had hoped for.

The second half of the 2015 Field Season was really successful, even if we did seem to have spent most of the time fighting against unseasonal weather! The completion of the work on the large house at Keem, and the clarification of the nature of some of some of the peripheral features surrounding the settlement, has provided us with some really clear results that are helping us create a detailed understanding of this settlement for the first time. We are all feeling very excited about returning to Keem in the summer of 2016 in order to investigate some of the smaller buildings adjacent to the house excavated this year, and we hope that by the end of the 2016 season we will have an idea of the chronological relationship between these smaller buildings and the larger house, and with luck perhaps even some information regarding functional differences that resulted in the dramatic changes in building size.

The next few months we will be busy completing the post excavation programme for the 2015 season and planning ahead for the 2016 season. The 2016 season marks the 25th anniversary of the establishment of the Achill Archaeological Field School by Dr. Theresa McDonald and we intend that next year will be a particularly special one for both the staff and the students in Achill. We will be posting regular updates to this page throughout the winter so everyone can follow along with what we are working on during the winter and spring season, together with details of plans for the 25th anniversary of the Field School.