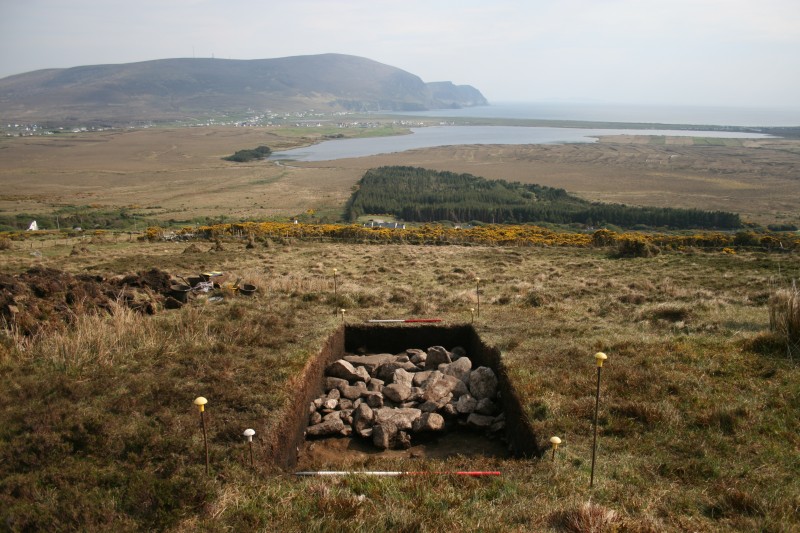 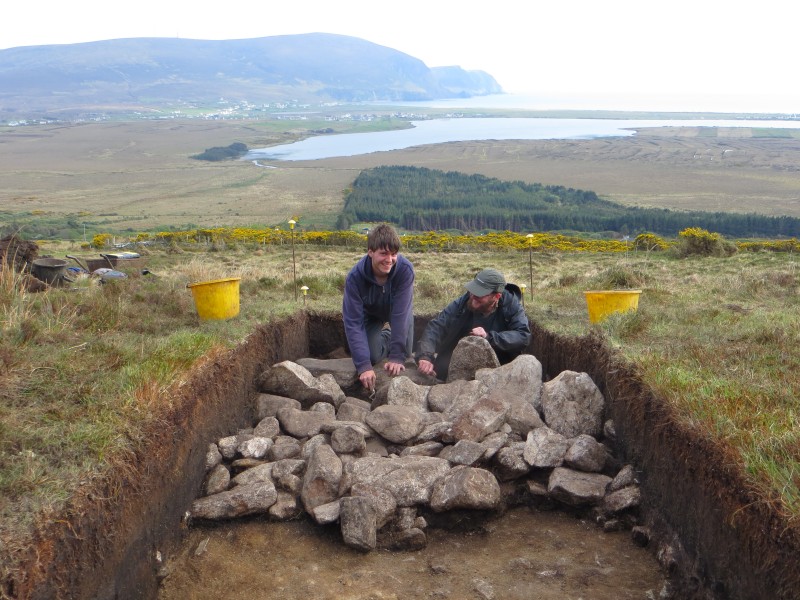 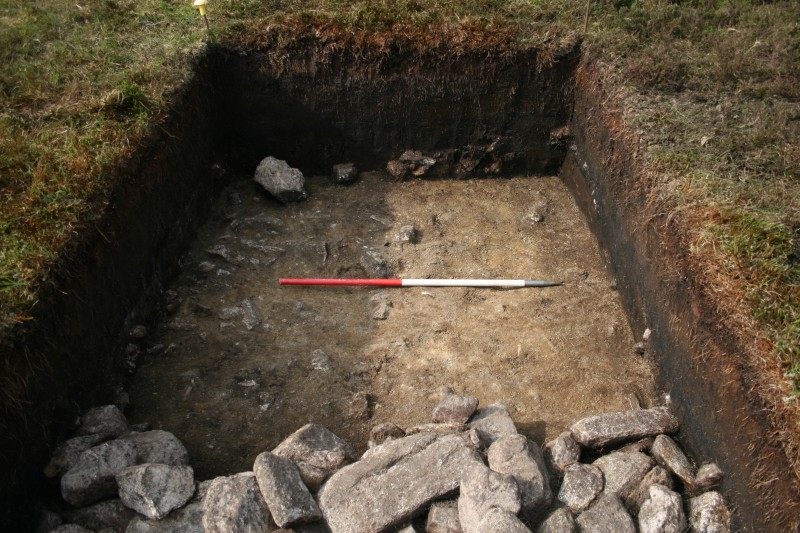 The first week of the 2016 season began with the laying out and excavation of a new trench over the Danish Ditch pre-bog field wall. The Danish Ditch links the Cromlech Tumulus site to a Neolithic Court Tomb 120m to the east, and this will be the third trench we have excavated over this feature since 2014. The previous two trenches were both located in the middle section of the Danish Ditch, whilst this latest trench is located further to the east and much closer to the Neolithic Court Tomb. During this season’s excavation at the Cromlech Tumulus we will be joined by students from the USA, Australia, Britain, Ireland, India, the Netherlands and Spain.

The week began well when the pre-bog field wall showed up almost straight away when we began de-sodding the cutting. It was visible, running from east to west, very close to the halfway point of the 6m by 2m trench that we had set up. After a couple of days of excavation and cleaning we had a very impressive trench with a wide field wall running through the middle of it. The wall was around 2m wide and consisted of two distinct parts. Along the north there was a dense mass of small and medium-sized stones which were un-coursed, but carefully placed to create a tight interlocking band of stone. In contrast the southern part of the wall consisted of a band of larger stones arranged in a slightly more haphazard fashion. It seems most likely that the wall in this area was a two phase structure, the northern half with its smaller stones predating the southern half with its larger stones. Whether this was done simply as part of a project of field clearance, or if it was part of a more deliberate phase of reinforcing and strengthening the existing wall, could not be established given the narrow width of the trench.

Downslope to the south, there was a spread of collapsed stone from the wall. This collapsed material was not particular dense or deep, and it is suggested that perhaps the original height of the wall was never particularly high.

Upslope to the north, there was only a very limited amount of collapsed stone from the wall, such as we would expect from a wall collapsing on a steep slope. However the ground surface at the bottom of the trench was surprisingly level, rather than following the natural angle of the slope. This suggested that perhaps a terrace or platform of some sort was present to the north of the field walls. A very curious layer of burnt stone could be seen protruding from the northern wall of the trench. There was no choice… we were going to have to expand the trench northwards! But first we needed to record the parts of the trench that we had excavated so far, and that occupied the remainder of the week.