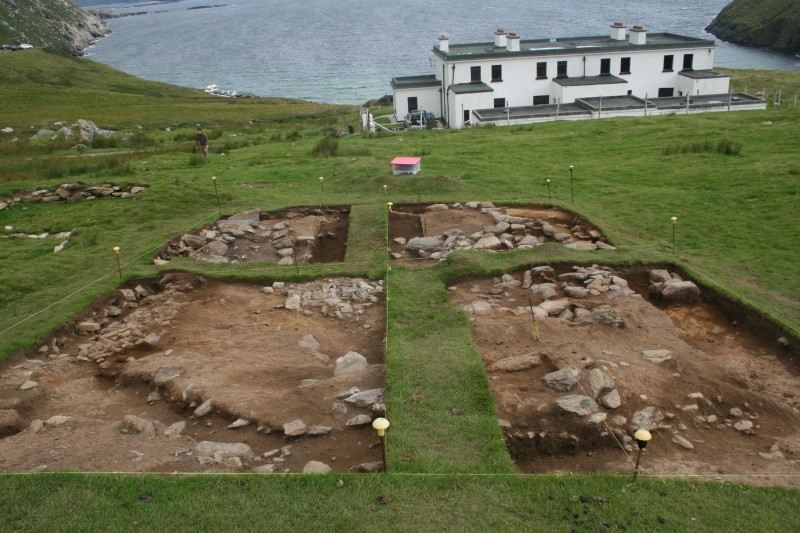 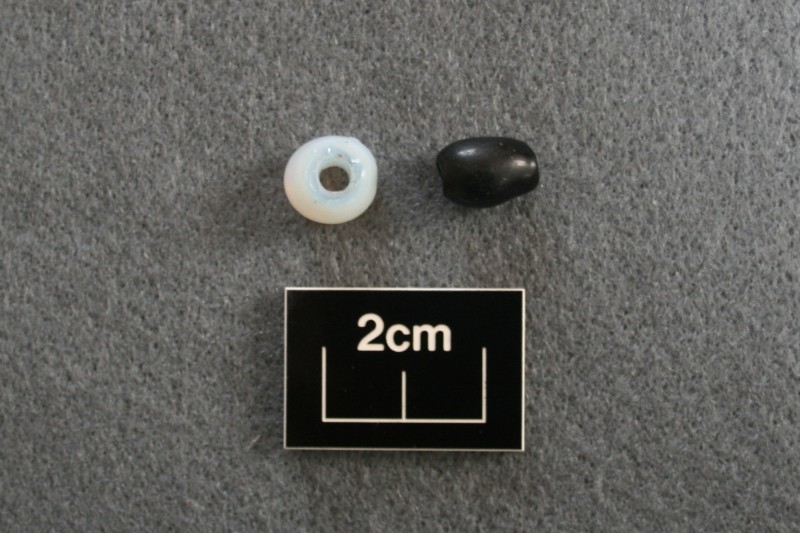 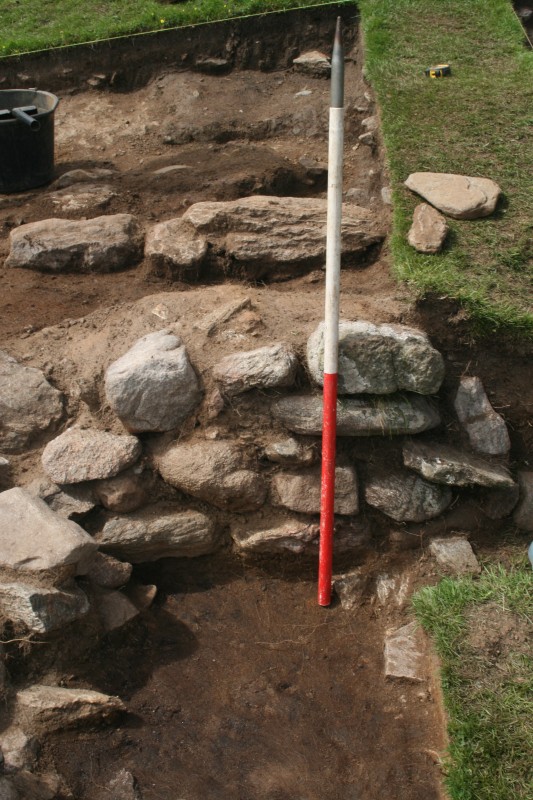 This week the building at Keem began to make much more sense! On Monday and Tuesday we continued excavating in all quadrants, removing collapsed material and revealing the structure of the house. As we suspected, the upslope NW end of the house is scarped into the bright orange subsoil. The floor of the building was cut away to form a level surface, and the walls were built up with the dug-out soil and sods. This soil and sod core was faced by dry stone walls. These retaining walls survived best at the NW end of the house, where they were protected by rubble. Here, we uncovered four intact courses of stone. There were a few nice finds hidden under the collapse too. In quadrant 1 we found a large rim shard of shell-edged pearl ware, and in quadrant 2 we uncovered two glass beads, one black and one white. The beads are a fascinating find. They were both found quite near each other, and are likely to be from the same string. They could be from a rosary. We need to do more research.

In quadrant 3 we continued cleaning around the doorway, which is located at the SE end of the SW wall; the same position as the house we dug last year. Unlike many vernacular dwellings investigated on Achill, there only appears to be one door to this house. The door is defined on either side by a stone kerbing and has very rough stone steps leading into the building. Just inside the doorway we found deposits of threshold material that was probably laid down to keep the mud at bay.

The SE wall of the building is the least well preserved. This is mostly because it faces downslope. Most of this wall was demolished, and the remains were washed down hill by the heavy rains to which Achill is no stranger. In order to understand the deposits in this part of the building, and to see if there are any structural remains, we cut a sondage 0.50m wide along the entire length of the quadrant flanking its SW baulk.

On Wednesday, we stayed in the lab working on post-excavation material. One team began digitising our scaled site plans using AutoCAD. Another team began carefully washing the assemblage of finds – mostly pottery – and laying them out to dry, while our Trainee Supervisor and illustrator, Cari, continued illustrating artefacts from this summer’s assemblage. Finally, two of our supervisors Joanne and Robert spent the day checking context sheets and started writing up the stratigraphic reports for their individual trenches.

On Thursday we were joined by Gary Dempsey from Galway for a workshop on photogrammetry. Gary led the team through the process of creating 3D models from photos and we practised in the office before heading out on site to try out our new skills. On Friday we were back on site, and Gary took the crew in small teams to make models of monuments in the Keem valley. One intrepid team even made the steep climb up Moyteoge Head to record the World War 2 lookout post!