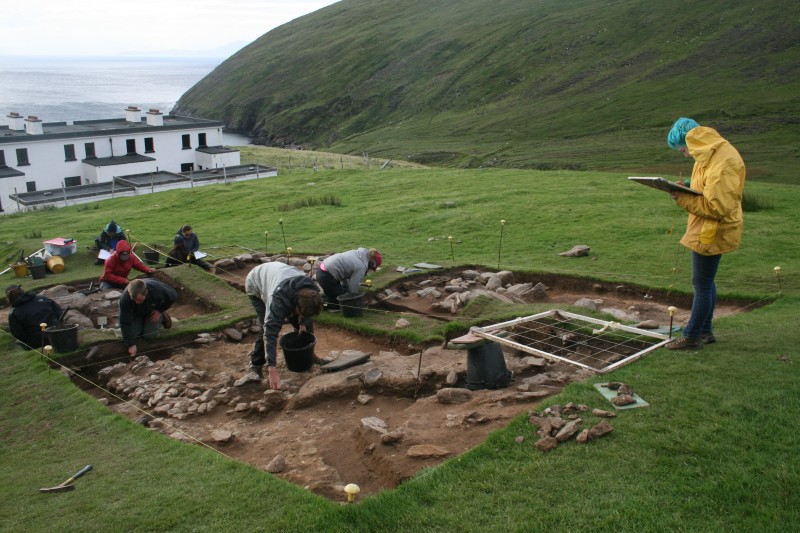 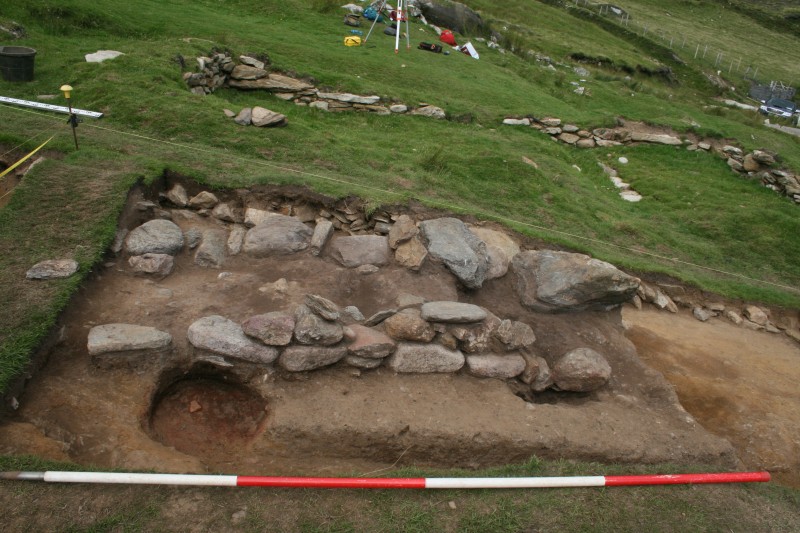 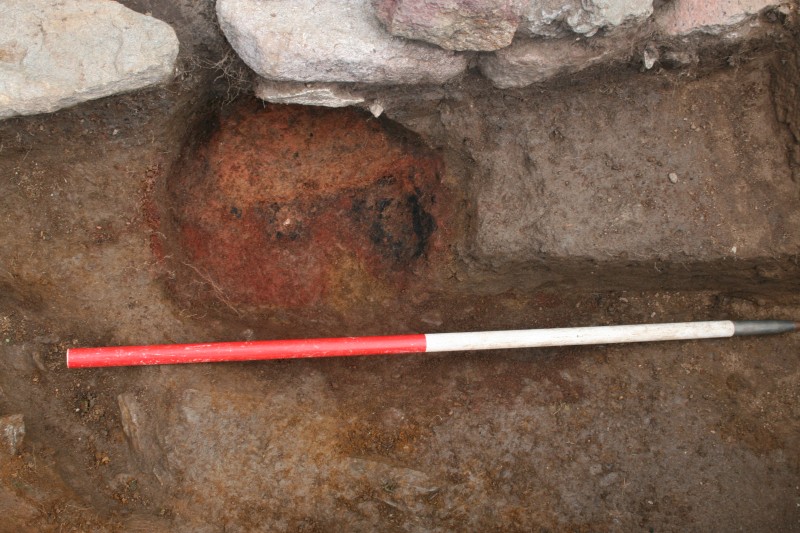 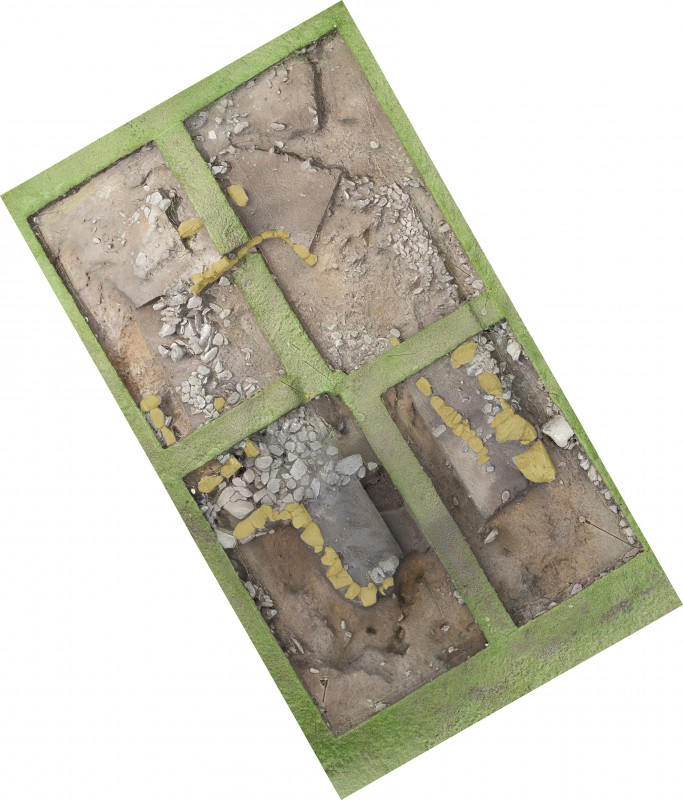 With most of the rubble and collapse now removed, this week we focused on investigating the structure of the building. We began putting sections through the walls and excavating the occupation deposits. In quadrant one the last of the rubble deposits were removed to reveal more of the back NW wall. Our supervisor Joanne was delighted to find a sheep/goat skull lurking under the tumbled wall material. Even better we found a dark organic occupation layer surviving under the collapse. In quadrant three, Stefanie and her team began removing the layers of threshold material around the inside of the door. One of the most mysterious features uncovered so far is a hearth set against the wall in quadrant 4. The hearth is in a very unusual location, just opposite the door. It is in a pit cut into the old pre-building soil. Strangely, it seems to run slightly under the wall of the house, so there is a chance that it predates the building, although the walls may also have subsided a little.

With the collapse gone we now have a much better sense of the building. The structure is sub-rectangular in plan, with very rounded corners both inside and outside. It is c.2.5m wide by c.5.8m long internally and 4.9 by 7.8m externally; a little bigger than we originally thought. With most of the structure now revealed we also began our next big round of planning. The team drew each grid at a scale of 1:20, emphasising the in situ structural elements of the building. As well as plans we began scaled section drawings of the baulks of our cutting to record the layers that make up the site. In quadrant 4 Carie and Maggie drew an elevation of the internal wall, which survives to two courses. Our hand-drawn plans were supplemented by a superb digital model of the house made by Gary Dempsey during his workshop last week. You can see it here: https://sketchfab.com/models/8f398f3173e8418e829083ff96c26d7f

On Tuesday evening we had a lecture from Brendan O’Neill, assistant director of the UCD Centre for Experimental Archaeology and Material Culture. Brendan’s lecture focused on the work of the Centre and some of the fascinating experiments on early medieval Gaelic houses that they have carried out. Brendan’s talk got us thinking about how we interpret buildings and the assumptions we carry when attempting to reconstruct them.

On Wednesday our plans to hike to Annagh on the north of the island were foiled by the rain. Instead, we spent the day doing post-excavation analysis at the centre. The team washed pottery, digitised site plans using CAD, scanned finds illustrations, and typed up the registers, while the supervisors concentrated on writing up the stratigraphic reports for their quadrants.

On Thursday the weather was also too bad to make the trip to Annagh, so we headed to Ballycroy National Park instead. The park covers an area of important coastal blanket bog and is an important habitat. On the way home we visited Fahy castle, a later medieval coastal tower house, where we made an exciting discovery! While walking on the beach beside the castle some of the students noticed a thick layer of shells in the eroding land along the beach, which turned out to be a shell midden. The monument was previously unrecorded, so we reported it to the National Monuments Service who gave it a number a new SMR number: MA034-009—-. Not a bad day’s work.

Our run of bad luck with the weather continued on Friday. We went to site in the morning and attempted to do some work, but we were forced to beat a retreat when the wind and rain proved too much for us.