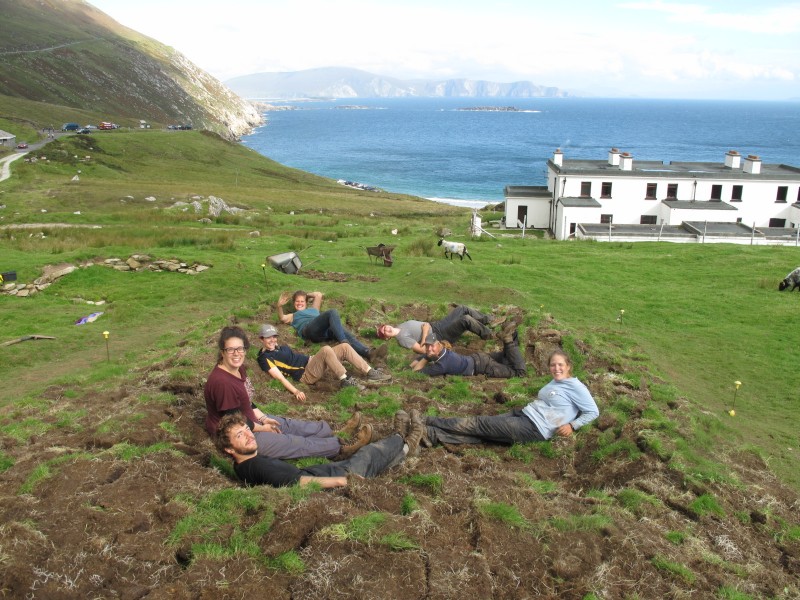 Week 16 was our last week on site. We spent Monday finishing up the last bit of recording, and double checked all our records. We gave the site one final trowel-back before taking photos for a post-ex photogrammetry model of the building. You can view the model at https://skfb.ly/TzLI. This digital model will complement the hand-drawn scaled plans of the site.

On Tuesday we began backfilling. Backfilling a site like Keem requires careful consideration. We wanted the site to be legible after we were finished, so we decided to deliberately mound up the walls, leave a gap where the door was, and leave short sections of wall face uncovered.

We started by piling up all the stone along the lines of the walls. This was a tough job. With the stone in place it became very clear that the building had been deliberately robbed out. There simply was not enough stone collapse at the site to make up the walls. After the stone was in place we barrowed all the soil back into the trench, again making sure to lay it along the line of the walls. Finally, we fitted the sods back over the trench like a big grassy jigsaw. Tired but satisfied we treated ourselves to a celebratory pint after work!

During the rest of the week we made a start on the post-excavation analysis, washing the pottery and digitizing the final drawings ready for publication.