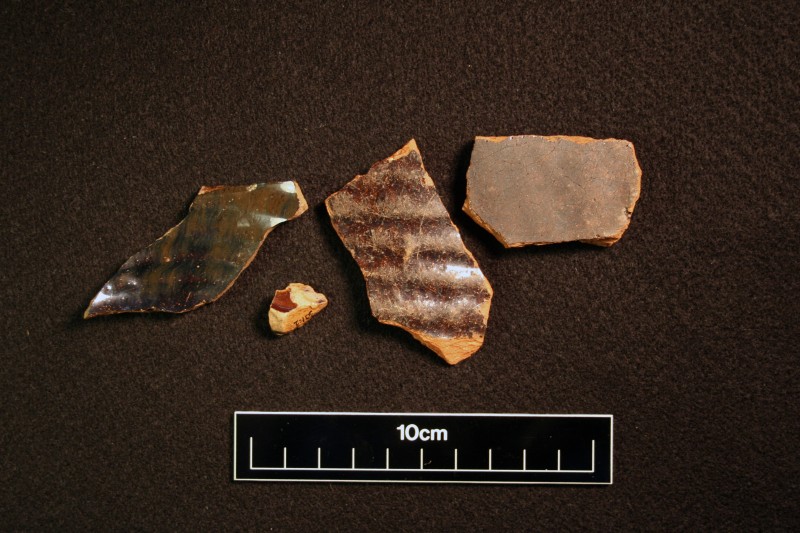 With the long warm days of summer long behind us, we have swopped our trowels and buckets for spreadsheets and Paraloid solution (clear acrylic resin used in conservation as a coating) here at Achill Archaeological Field School. One of our priorities for autumn and winter 2016 is to complete the post-excavation analysis and final excavation report for Keem Building 4. Most of the site plans and drawings have already been digitised. We also have wonderful finds drawings made by our students under the expert tutelage of Rena Maguire. The main outstanding task is the analysis of the ceramic assemblage.

Tough and durable ceramics sherds made up the bulk of the assemblage at Keem Building 4. Unlike organic materials such as bone, wood or leather that disintegrates in Achill’s acidic soils, ceramics stand the test of time. The fragments of plates and pots left behind by the residents of Keem tell us a good deal about their lives from foodways, taste and display to economics, household organisation and attitude to rubbish. The first step in processing the ceramics is to gently wash them and allow them to air-dry before applying the NMI (National Museum of Ireland) number using Paraloid B72 solution and black ink. This is a delicate process, but it is the most archive safe method and it does the least damage to the artefacts. After the numbers have been applied the finds can be photographed, described and analysed.

Building 4 yielded a meagre 16 sherds of pottery, equating to a minimum of 9 vessels. This is just over a third of the number found at Keem Building 3 which had a MNV of 34 (259 sherds). Like Building 3, most of the ceramics from 2016 were refined English earthenwares, with some blackglazed earthenwares, and a single piece of stoneware. Identified wares include creamware, edged pearlware, blackglazed earthenware, Staffordshire slipware, and Buckley-type ware. Most these ceramics date from to the late eighteenth and early nineteenth century, which is in line with what we would expect for the building.

The bulk of the ceramics found comprised small fragments, and most were found outside the buildings, meaning we cannot definitely connect them with the structure. It is important to bear in mind that the house was deliberately demolished, resulting in disturbance and scattering of artefacts. There was a concentration of pottery sherds to the north of the building and this could be indicative of an area of dumping. Significantly a very clear dump deposit was found in the same place at Building 3, so this could be a deliberate pattern.

At least four vessels were found inside Building 4. The most securely stratified piece was a large fragment of an edged pearlware plate. The plate had a scalloped rim with vivid blue painted design. Edged wares were produced in the Staffordshire potteries from the end of the 18th century, becoming cheaper and more available in the first half of the 19th century. They were certainly popular in Keem; at least ten edged plates were recovered at Building 3. This preponderance of plates raises many questions about the use and display of ceramics at Keem. There may have been a dresser or a wall rack for showing off the plates in Building 3. Interestingly too, at least three plates were repaired with metal staples, called ‘tinkers.’

Accompanying these fine table wares were coarser kitchenwares. Sherds of two blackglazed vessels were found inside Building 4. The first had a bright red fabric and dull black glaze and was of Irish manufacture, while the second was probably from the Buckley area of Wales. Both seem to represent hollowwares, and may be jars or pans likely to be associated with dairying.

After finishing the ceramics report we will examine the other finds. In addition to ceramics the assemblage at Keem House 4 contained glass, as well as slate, amethyst, metal, and two beautiful glass beads.