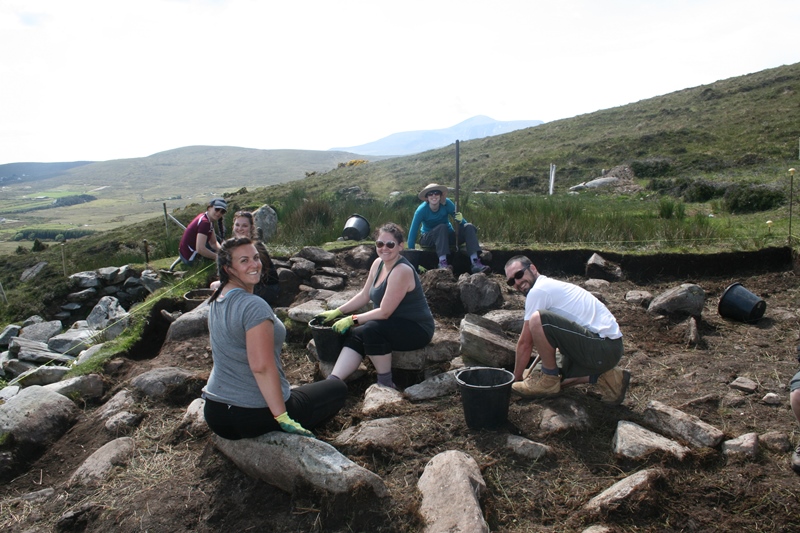 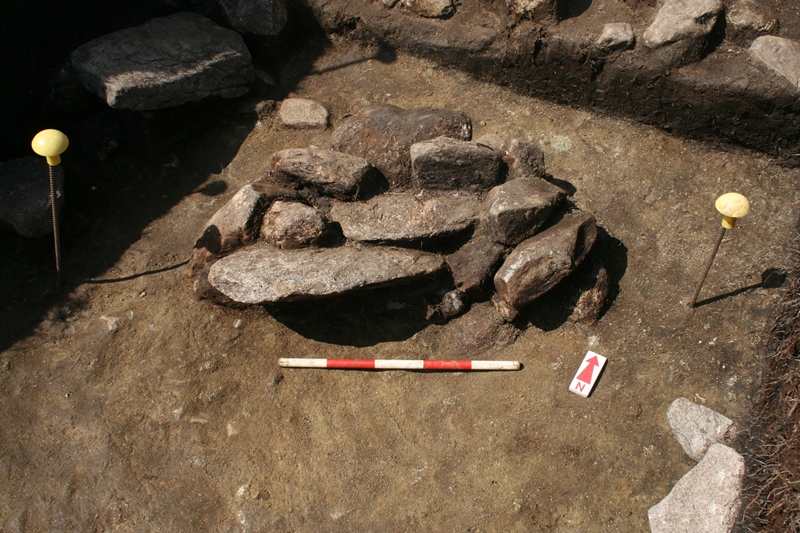 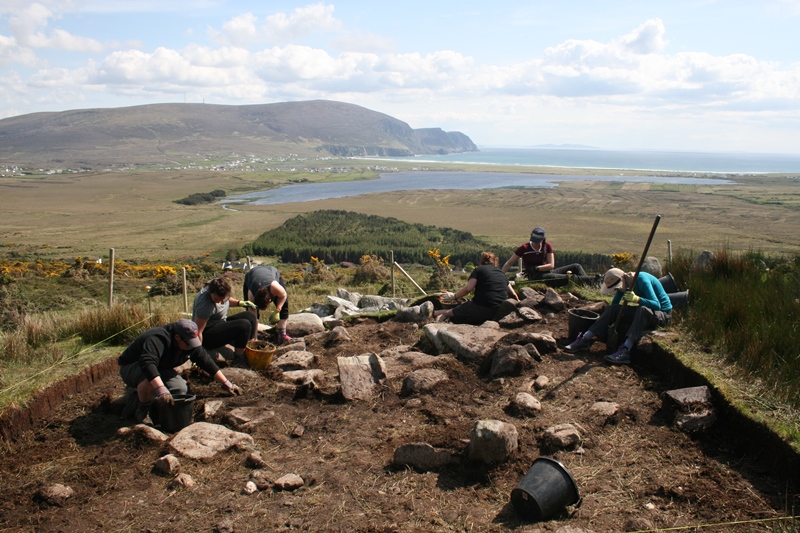 This week we began work in Quadrant 5, a new excavation area at the eastern side of the Cromlech Tumulus site. Quadrant 5 is a large trench that measures 12m by 6m that will be excavated over five or six weeks. We began by opening up the northern half of the trench, essentially a 6m by 6m square, in the area where we expected to find the eastern edge of the Bronze Age building, noted in previous excavations at this site.

Once we had de-sodded the site and cleaned up the trench it appeared that the Bronze Age building was located exactly in the area predicted, at the west side of the trench. Unexpected, however, was the discovery of a linear channel running through the wall, which appears to be an entrance feature. The channel was filled with rubble making it impossible to confirm this identification, but once the rubble is recorded, it can be removed, and we can confirm one way or another if our observations were correct. In the north east of the trench we discovered a spread of small angular stones which appears to be either a pathway leading around the buildings perimeter or an external yard surface, although again this will require further confirmation. The central area and the south eastern area of the trench are currently far less clear. These areas are covered by large stones, most of which seem to be displaced, and whatever structural remains may be present are currently concealed. Once the first phase of recording has been completed we will be able to remove these displaced stones and hopefully the nature of the archaeology will then become clear.

Whilst work was proceeding in an orderly manner in Quadrant 5 during the second half of week 3, a small group of students returned to Trench 4 to excavate the ovoid stone feature. This was carefully deconstructed and was found to have been laid directly on the surface of the terrace with no underlying pit. However we did retrieve a really promising charcoal sample that should allow us to date the feature quite precisely. Because the feature was found not to cover a pit it must represent some sort of hearth which makes its location equidistant between the two walls particularly intriguing. If the walls do define the edges of a road or a trackway we jokingly suggested this feature might represent Ireland’s earliest street light! We are currently discussing opening up a larger trench in this area during the 2017 season, along with expanding Trench 2. If the field walls are confirmed to demarcate a road or track, and if further examples of these stone hearths were to be discovered along the centre line of the road or track, then our jocular suggestion about street lighting might have to be considered more seriously.