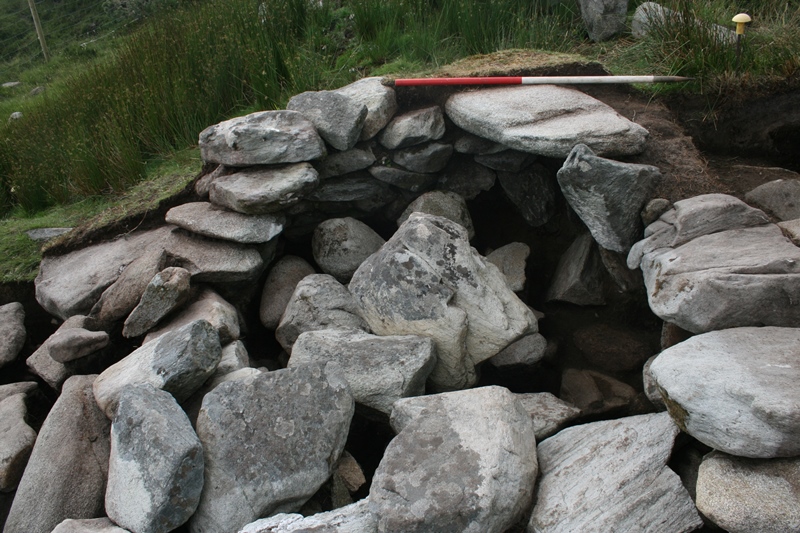 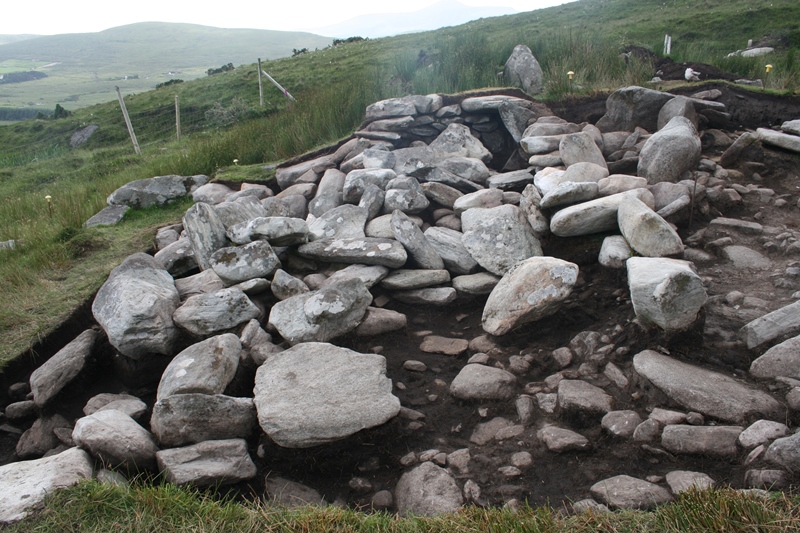 Work in the south of the trench this week concentrated on removing the large spread of rubble that derived from the collapse of the small corbelled hut. The stones were carefully unpicked and moved out of the excavation area, although a couple of stones were too large to move! Once as much rubble as was feasible had been removed the underlying deposit was carefully cleaned. This layer consisted of a dark black soil with a very high concentration of small stones. Clearly this is a deep deposit and it will have to be removed in order to see what features may be concealed beneath it. However that work will have to wait until 2017 as there is simply not enough time left this year to undertake such a big task.

In the northern half of the trench work continued on emptying out and cleaning the entrance channel. As we entered the lower deposits it became increasingly difficult to remove the rubble, as the stones were large and formed a difficult interlocking mesh. The larger stones at the bottom of the entrance seem to be stones used to line the sides of the channel. The channel is large and well built with a width of just under a metre. It was lined with large stones and curves gently around to the south, making it quite different to the other Middle Bronze Age buildings Achill Archaeological Field School has excavated on Slievemore in previous years. Further work was undertaken in the north east of the trench where a series of soil deposits were removed which had built up against the outside edge of the building, revealing the soil and rubble core of the buildings wall in this area Whilst this work was taking place it became apparent that a layer of soil and small stones beyond the building that we had previously assumed represented a rather worn yard surface located outside of the building was actually a much deeper deposit than had been envisaged. We started a small sondage (an exploratory cutting) in the area immediately south of the eastern end of the entrance channel. This sondage revealed that the soil deposit was around 0.7m deep and that it filled up the whole area between the outer wall of the Middle Bronze Age building, the east-west field wall and the southern side of the entrance channel. Curiously the deposit covered some earlier features, a substantial wall leading off from the southern side of the entrance channel, and beneath the wall a large pit filled with very large stones. Clearly we were going to have to expand this sondage in order to get a better understanding of what was happening!

Unfortunately we were rained off the site a couple of times at the end of this week and so there isn’t a video from the site because we didn’t get a chance to record one!