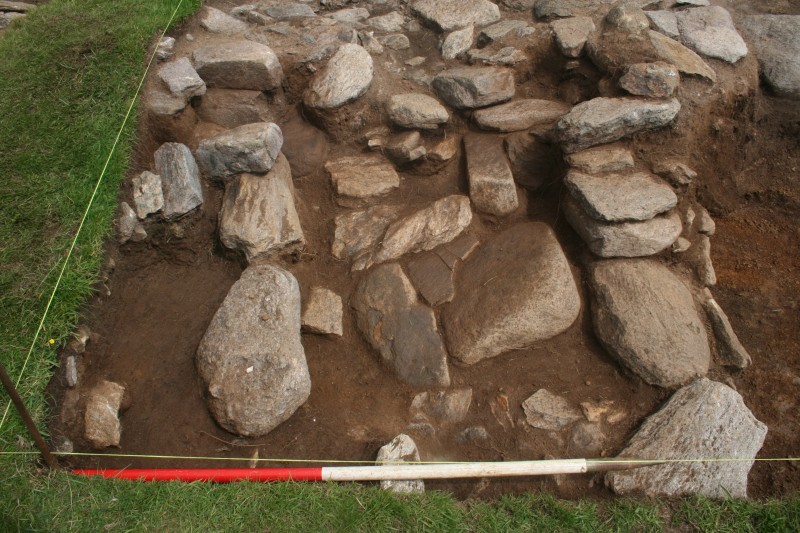 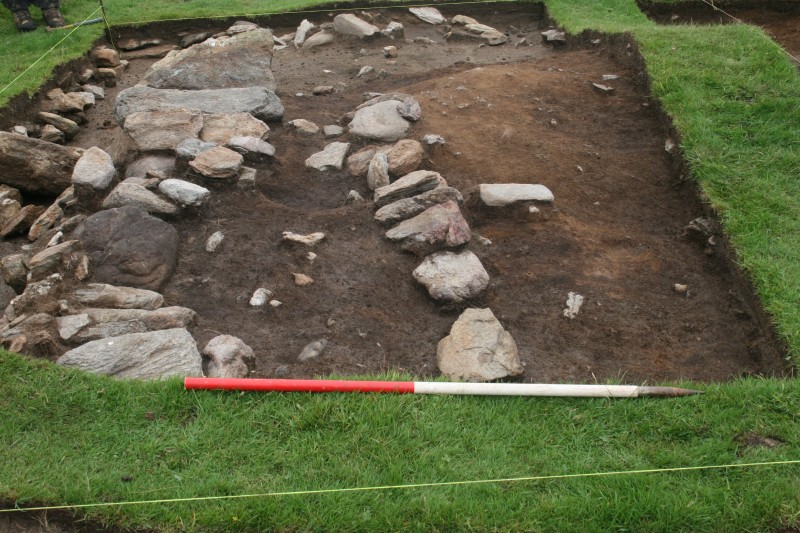 Cleaning the upper deposits during Week 10 revealed a curious building foundation that seems to represent a small heel-shaped structure with a curved upslope end and a square downslope end. The walls are remarkably thick and, therefore, the internal area appears to be remarkably small and narrow. By Friday, we were ready to begin planning the trenches. The team split into four teams, each working to prepare a detailed 1:20 plan of one of the four quadrants.

After planning the building, work could begin carefully investigating the structure of the building. We began cleaning down the walls in an effort to reveal their structure. It soon became apparent that, unlike the solid stone walls we found in House 3, this building had walls made of sod or clay with an internal and external stone kerb. This structure was clearest in Quad 4, where the walls were a massive 1.4m wide. Along the SE side of the building, the walls are very poorly preserved. They seem to have completely fallen away.

However, in Week 11, we also found four surviving courses of dry stone walling along the interior of the house in Quads 1 and 2 hiding under the collapse and rubble. More evidence for a structure came up in Quad 3 with the discovery of a well-made doorway. The door is in the same position as House 3, at the SE end of the southern long wall of the building. Inside the door is an area of rough stones or crude paving that could represent some kind of entrance surface. There is also some difference in height between the rough paving and the house entrance.

During week 12, as well as looking at the structure of the building, the team has also been investigating some of the features outside the building. We found a drainage gully in all four quadrants running around the outside of the house. To the SE of the building, there was some evidence for rough pits filled with shell and charcoal. More exciting discoveries await!