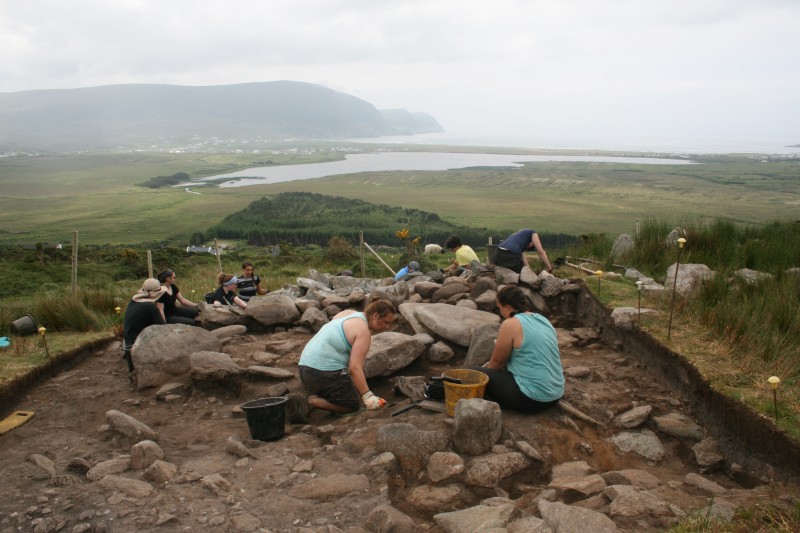 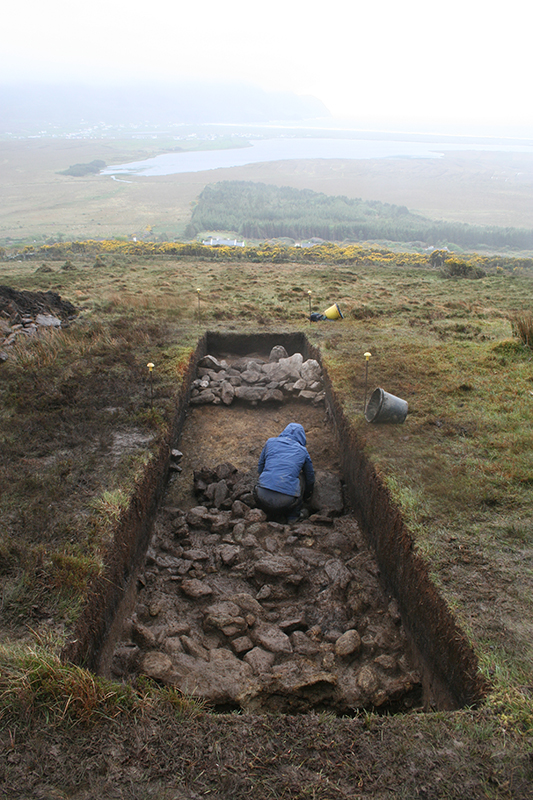 Slievemore is a special mountain. Its slopes bear the traces of over 6000 years of human settlement and activity from the earliest Neolithic megalithic tombs to the ‘lazy bed’ ridges used to grow potatoes until well into the 20th century. One of the busiest periods in the life of the mountain was undoubtedly the second millennium BCE. Since 2006 the Achill Archaeological Field School has been surveying and excavating the remains of an extensive Middle Bronze Age landscape that extended across the southern slopes of the mountain. To date we have excavated three MBA roundhouses and carried out detailed survey of an associated pre-bog field system.

The initial focus of our work was on the open mountain above the relict village of Slievemore, but in 2014 we shifted to the western end of the mountain to investigate a mysterious site known to antiquarians as the ‘Cromlech Tumulus’. For over 175 years scholars argued over what the site actually was. Some maintained that it represented a ‘sepulchral complex’ while others dismissed it as a series of more recent huts. Our excavations between 2014 and 2016 have determined that the site is in fact a very substantial Middle Bronze Age roundhouse with three later huts built on top.

A Roundhouse of the Second Millennium BCE

During our three seasons of excavation we have opened five large trenches over the site covering an area of some 12m by 16m. The first two seasons concentrated on the western end of the site, uncovering the thick earth-and-stone walls of the roundhouse, and the dense concentration of pits and postholes dotting the building’s floor. Many of these features undoubtedly relate to the timber frame that carried the roundhouse’s roof, or served as storage pits. Two of the pits had ‘odd’ contents that marked them out—the first held a pebble carved to resemble a face, and the second held cremated bone, possibly human. These special deposits are likely to be magic or votive offerings designed to protect the dwelling or to mark important points in the lifecycle of the building or its inhabitants (Brück; Cleary 2006). To the south of the cutting overlying the roundhouse we found an late-medieval hut site that was dated to 1435 -1618 AD using charcoal from its hearth.

In 2016 we opened a new large trench—5.5m by 10m— along the eastern side of the site. This trench (known as Quadrant 5) focused on an important part of the monument, investigating the area where the entrance was likely to be located. It also included the remains of a dry-stone clochán hut peeking out from the peat—it is likely to be post-medieval in date. Quadrant 5 contained some fascinating EBA features, chief of which was a curved east-facing entrance channel lined with stones. We also identified part of a pre-bog field wall running up to meet the roundhouse in this trench. Unfortunately we ran out of time before this important area could be fully investigated—we plan to return in summer 2017.

Our work on this part of Slievemore has included the investigation of a pre-bog linear feature known to antiquarians as the ‘Danish Ditch’. The feature extends between the ‘Cromlech Tumulus’ roundhouse and a Neolithic court tomb, before looping south down the mountain. Today it is just about visible as a low ridge in the peat covering this part of Slievemore. Between 2014 and 2016 three slot trenches were dug across the ‘Danish Ditch’ by the AAFS. The most exciting results came from the 2016 season when we determined that the feature is not just a single field wall, but may in fact be a formal route way. The 2016 trench uncovered two parallel walls flanking a shallow terrace. Mid way between the two walls we found a shallow stone setting with deposits of charcoal in it. Could this be a fire pit placed to mark the route? It’s a tantalising piece of evidence but many questions remain.

Plan of the ‘Cromlech’ roundhouse showing the 2017 area in red

Our plans for summer 2017 is to pick up from where we left off in 2016. We’ll reopen Quadrant 5 at the eastern end of the roundhouse to further investigate this important part of the monument. We’ll also open up a fourth slot trench across the Danish Ditch aimed at determining if the double-walled route way structure is present at the western end of the feature where it meets up with the ‘Cromlech’ roundhouse.

We have a great line-up of visiting experts who will join us during the ‘Cromlech’ excavations. Neil Carlin, Aidan O’Sullivan, and Kerri Cleary will give us guest lectures on different aspects of Bronze Age Ireland, and Gary Dempsey and Rena Maguire will run specialist workshops on photogrammetry and finds illustration. It’s going to be a busy summer!