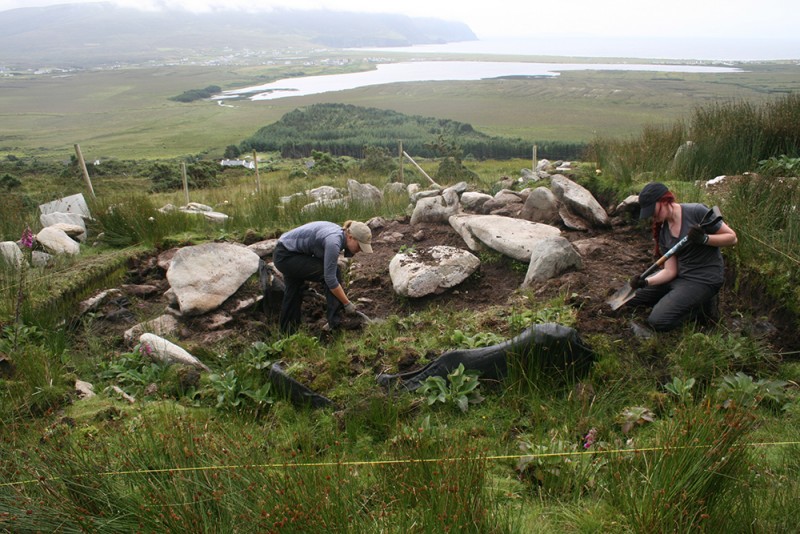 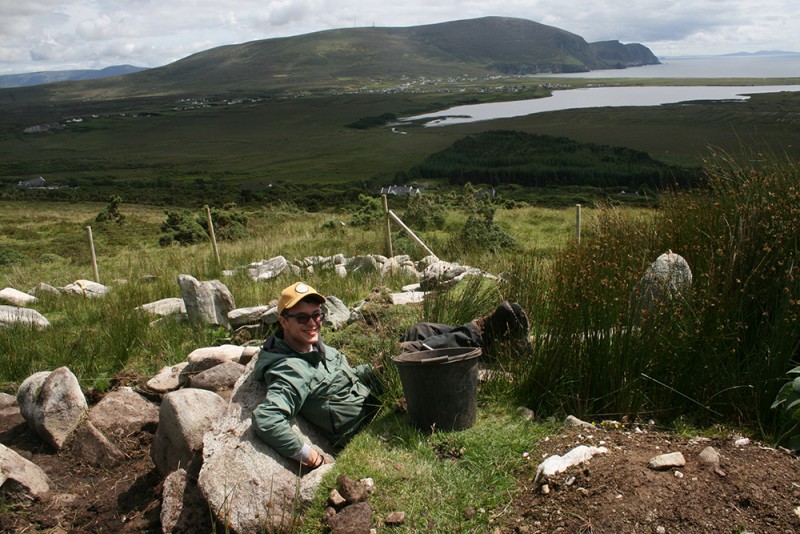 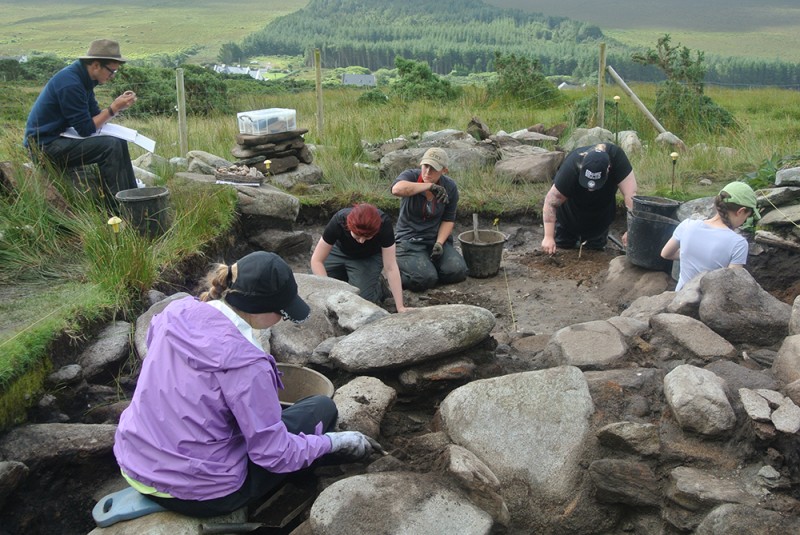 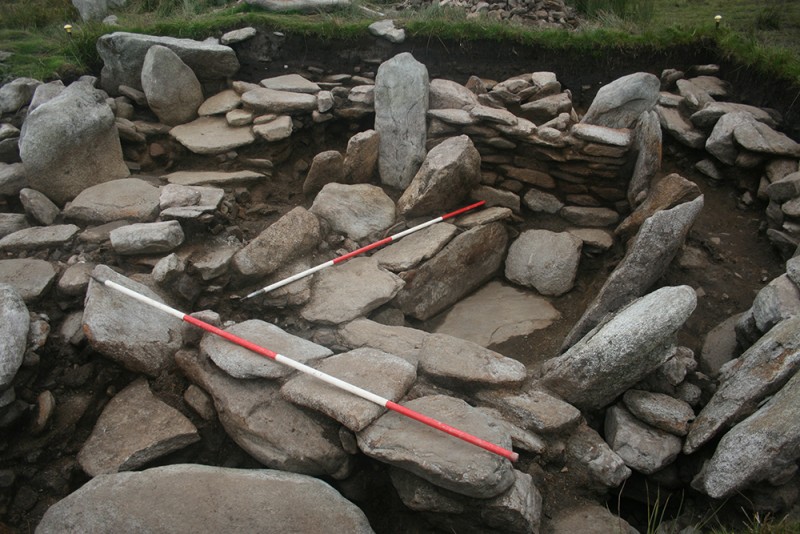 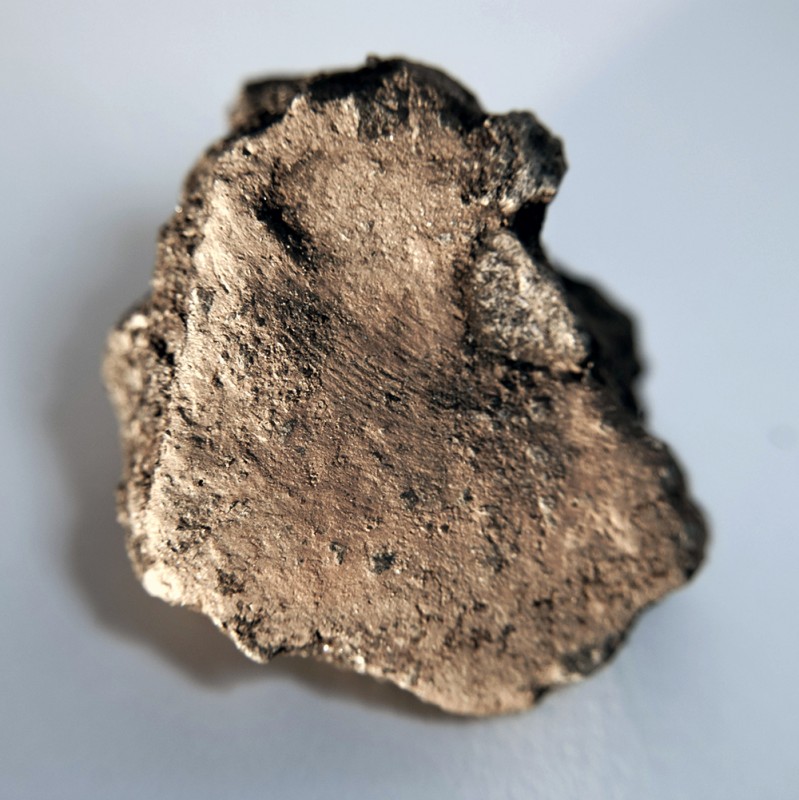 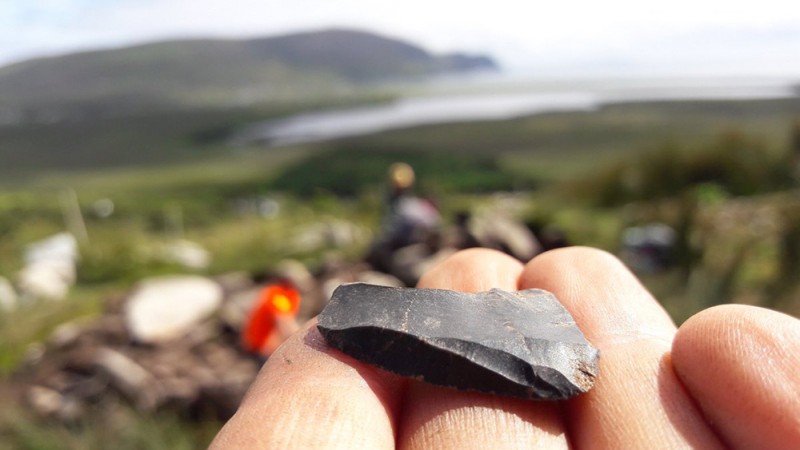 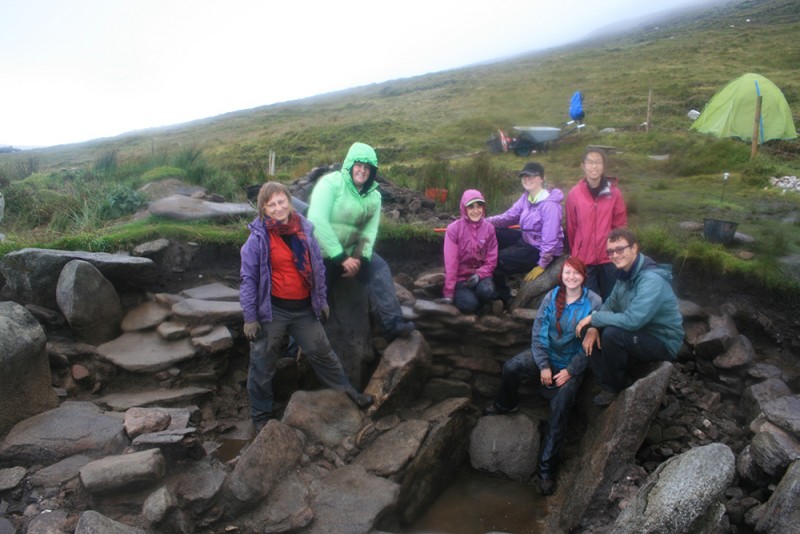 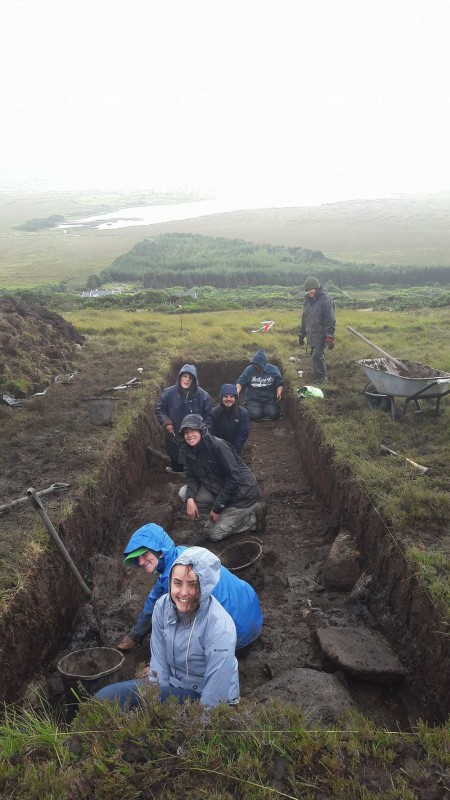 It has been a fantastic summer on Slievemore. During July and August we carried out our fourth and final season at the wonderful ‘Cromlech Tumulus’ site on the south-facing slopes of the mountain. In our eight short weeks on the mountain we discovered a new monument (a Bronze Age fulacht fia) and potentially pushed back the chronology of our site by up to 2000 years, with the discovery of a possible Neolithic horizon at the lowest layers of the site.

The Achill Archaeological Field School has been excavating at the ‘Cromlech Tumulus’ since 2014. Before we began our work nobody was sure what the site actually was. Nestled at the core of a rich prehistoric landscape encompassing an early Neolithic court tomb, portal tombs, Bronze Age roundhouses, and a pre-bog field system, the site has aroused the interest of generations of scholars.  The monument is shown on the first edition 1838 OS map where it is marked ‘Cromlech Tumulus’. For over 175 years scholars have described the monument with little consensus on what it actually was, and it has been variously interpreted as a ‘sepulchral complex’, ‘multiple clocháns’ (corbelled stone huts), a ‘cairn’ and ‘drystone gallery’, or the ruins of one or two houses with superimposed lamb shelters at one end. The site’s mystery is added to by the presence of a strange linear feature that runs between it and a Neolithic court tomb lying some 140m to the east. The linear feature is marked on the first-edition OS map as the ‘Danish Ditch’, and is shown looping east/west between the ‘Cromlech Tumulus’ and the court tomb before turning south and running down the mountain slope.

In 2014 we decided to settle matters once and for all. We began a multi-year programme of excavation with the aim of determining the identity of the ‘Cromlech Tumulus’, and the related ‘Danish Ditch’. A trench of 16m by 12m was laid out over the monument, divided into five quadrants or cuttings.  Between 2014 and 2015 we focused on the western half of the site, uncovering a large Middle Bronze Age roundhouse overlain by a medieval and later post-medieval hut site. The building comprised a stout sub-circular wall of earth and stone defining an area of around 6.8m by 8.6m (internally). The walls of the house were composed of earthen banks faced with dry stone, and were up to 2.3m thick in places. The interior of the building was full of pit and postholes. In 2016 we moved to investigate the eastern area of the site outside the entrance of the roundhouse, and we finished off this area in 2017.

This eastern area contained a number of features which were identified in 2016 including the eastern edge of the MBA roundhouse, overlain by the ‘Danish Ditch’ pre-bog wall, and a corbelled post-medieval clochán. The most exciting find of 2017 was a large stone-lined fulacht fia surrounded by a burnt stone mound. Fulachtaí fia are prehistoric boiling troughs. Most of them date to the Bronze Age, and they are primarily connected with outdoor cooking but other uses have also been proposed including bathing, brewing, metalworking, tanning, drying, washing, and cloth fulling (Hawkes 2015, 52). Fulachtaí fia were used for heating water using pyrolithic or hot stone technology ­–a technique that can be traced back to Upper Palaeolithic Europe (ibid, 48). This involved heating stones in a fire and then immersing the hot stones in water. Hot stones have the advantage of retaining heat from fast burning fuels much longer than the fuels themselves – allowing for the slow or prolonged heating of water or various materials (ibid).

Plan of the ‘Cromlech Tumulus’ site

Our fulacht fia comprises a stone-lined trough, 1.8m long by c.1m wide and 0.45m deep. The trough abuts the eastern wall of the earlier MBA roundhouse, and it is surrounded by a low stone enclosure outside of which is the arcing burnt stone mound. The trough is sunken below ground level to help it retain water, and indeed on the few days of heavy rainfall we witnessed on site it was found to still fit its purpose! It is also worth noting that there is a small underground stream running immediately east of our trench–the likely water source for the trough. The stone-lined trough was surrounded by a low stone wall/kerb that served to retain the mound of discarded burnt stone from the heating process. To the south, the mound was retained by the ‘Danish Ditch’, indicating that it post-dates this feature. The mound itself was made up of lots of heat-shattered stone and charcoal. Interestingly there were quite a lot of cracked beach cobbles in the mix­–material that would have had to have been carried from the nearest beach, almost 3km distance. We also recovered a broken coarse Bronze Age pot from the burnt mound. The sherds come from a simple tub-like vessel, perhaps related to food preparation at the site. Astonishingly one of the sherds has the imprint of a human finger on it. Pottery is a rare find at Irish fulachtaí fia, but it does occur (ibid, 58). The burnt mound yielded no bone–not unsurprising in these acidic conditions.

Fulachtaí fia are one of the most common prehistoric monuments found in Ireland and over 1000 examples have been excavated. Recent work by Alan Hawkes has collated and reappraised this rich dataset. While acknowledging diversity in form and function, Hawkes argues that many fulachtaí fia served as cooking spots. These were not every-day ‘kitchens’, but more likely special feasting sites where communities came together to celebrate seasonal festivals or rites of passage. Hawkes and others have argued that the burnt mounds themselves, rather than being just rubbish dumps, served as important physical mementos of past feasts (ibid, 67). In this context, the siting of the fulacht against an earlier abandoned roundhouse is very interesting, perhaps signifying a return to a place that had memories and stories connected to it.

‘Cromlech Tumulus’ 2017 by evecampbell on Sketchfab

At some point in the Bronze Age the Slievemore community decided to decommission the fulacht fia trough and it was filled with large boulders and covered with flat paving slabs. We know that this happened in antiquity because a large chunk of Bronze Age pottery was recovered from a layer above the paving. This paving could represent a change in the monument’s use; the added paving slabs create a very nice surface that could have been used for a number of activities, but as yet we’re not sure what.

In the southern half of our 2017 trench more surprises were waiting. Beneath the layers of collapse and silting we discovered a number of stake holes associated with a dark charcoal-rich layer full of pieces of worked flint, chert, and quartz: stones that we know were used to make tools in prehistoric Ireland. Upon further inspection we discovered that this layer extended along the entire eastern side of the trench, underlying the Bronze Age burnt mound and fulacht fia. Over 100 individual pieces of worked stone were recovered from this layer. Most of them were tiny pieces of debitage – fragments left over from stone working, or tiny nodules of water-rolled flint. Among the handful of finished tools we found a hollow scraper, and a tiny but exquisite leaf-shaped chert arrowhead. These finds are especially important as they are both forms typical of the Neolithic (c.4000–2500 BC). While we need to confirm this phasing using carbon dating it potentially pushes back the chronology of our site by around 2000 years!

Our final two weeks on Slievemore were spent digging a large 12m by 2m trench across the path of the ‘Danish Ditch’, a pre-bog field wall running between our MBA roundhouse and a nearby Neolithic court tomb. This was the fourth slot trench excavated over the features since we began our project here in 2014. Previous work has tracked the path of the monument and our 2016 trench was especially significant, revealing that the feature comprises a pair of parallel banks. Our 2017 trench was sadly empty, despite being carefully lined up with the known line of the monument. While analysis is ongoing it seems that it may have been robbed out in antiquity–perhaps related to the construction of the fulacht fia.