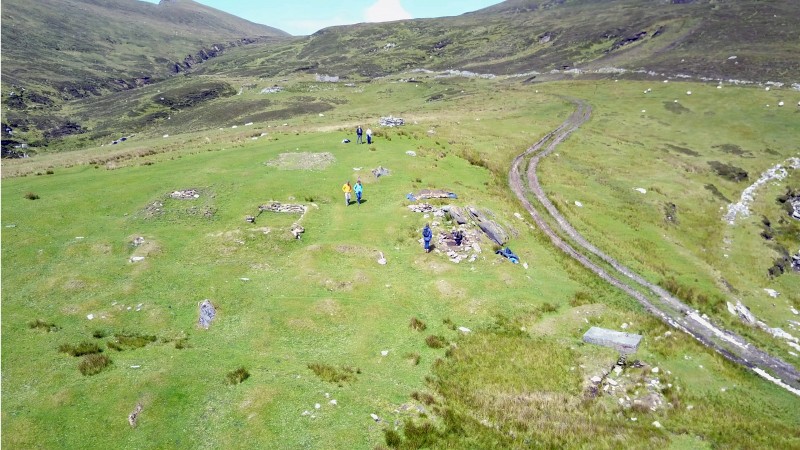 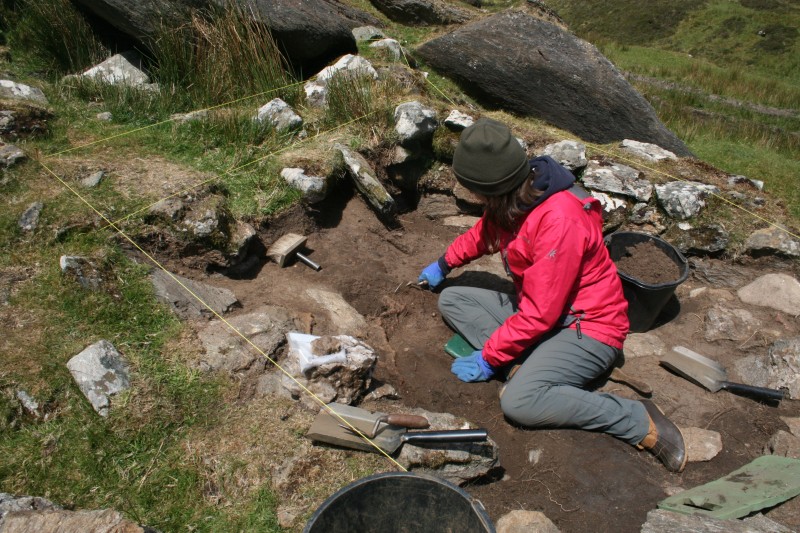 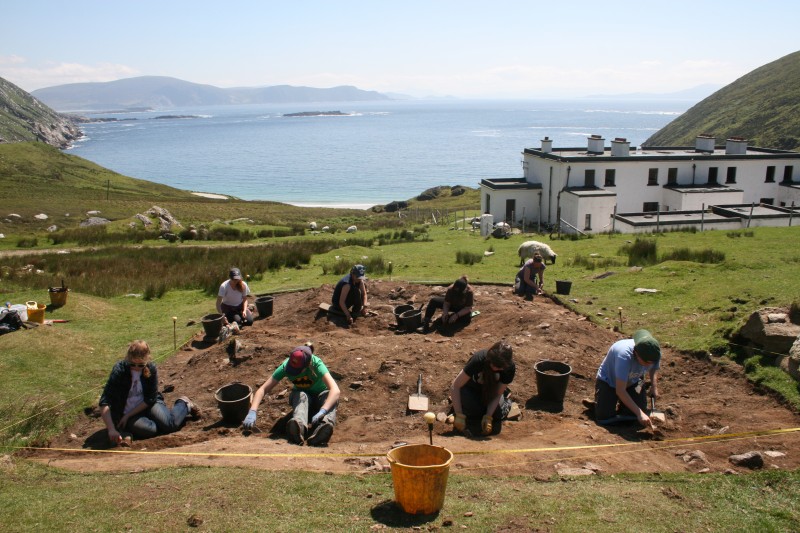 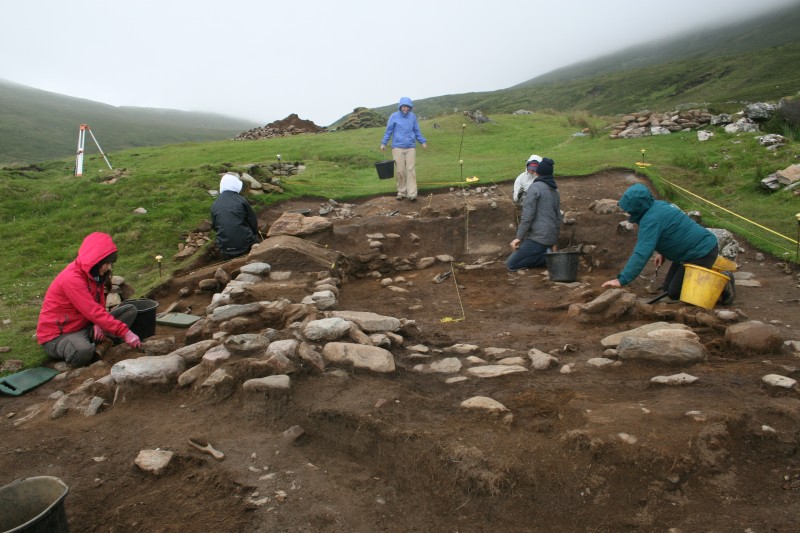 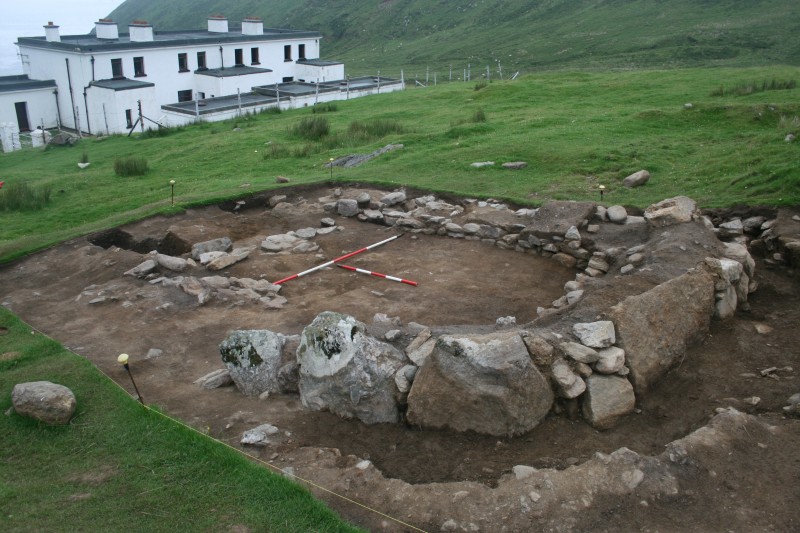 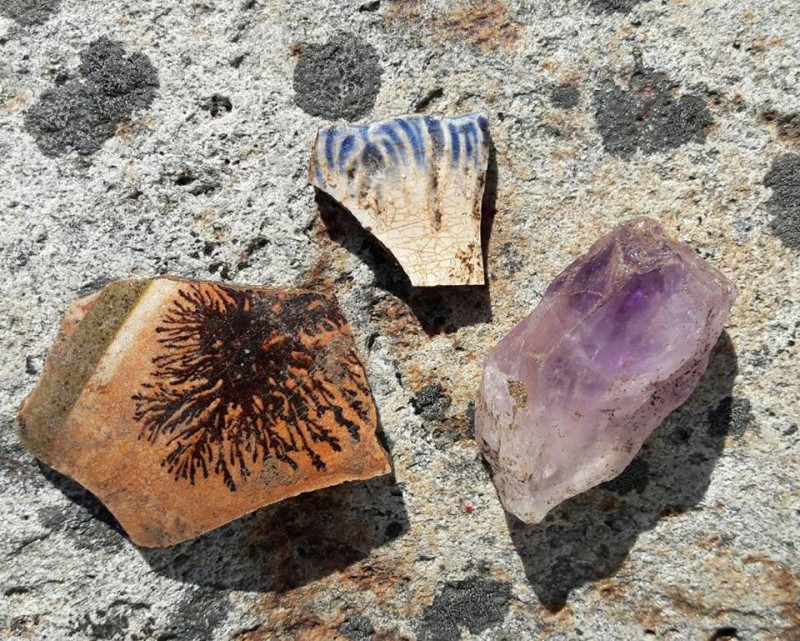 With just over two weeks until we begin work on our first excavation of the summer, things are busy at the Achill Field School. At the end of May we’ll return to Keem Bay, for a sixth season of work. Keem is one of the most beautiful places on Achill with a complex and poignant history stretching back to at least the early medieval period. From 2009 Achill Field School has been investigating the site of a village that stood in the valley from at least the mid-18th century. Today the village consists of the remains of around 30 buildings scattered across a south-west facing hillslope and along the bank of a small stream in the valley. Between 2009 and 2017 AAFS investigated two other building from this settlement.

Our 2017 season at Keem targeted two buildings: Building 2, a dilapidated building footprint in the core of the settlement and Building 5, a smaller footprint that seemed to overlay the other buildings. Building 2 was shown to be an oblong single-room structure with very thick earth and drystone walls. It had a hard-packed sandy floor and its stone-lined hearth was located in the long wall opposite the doorway. In a building that may not have had windows, this would have ensured plenty of light around the natural fireplace. The building also had a drain or lintéar running across the floor and out the door. Drains are a common feature in small vernacular houses; they were used to collect manure from the cows who shared the house with its human inhabitants. The presence of a drain also indicates that the building was occupied during the winter months.

Now that we have excavated three buildings from the main core of the village we can really dig down into the patterns in architecture and material culture across the three structures. Clear patterns are emerging in terms of the way the houses were built. There are common building techniques and masonry styles evident in all three structures, as well as commonalities in the layout and spatial organisation.  These patterns tell us that for the community at Keem there was a specific way to build a house.  The similarities and differences between the spatial organisation of the three houses tells us about the daily practices and priorities of the people at Keem. The 2017 assemblage was broadly in line with previous years, comprising fragments of refined earthenware plates and jugs, and coarse earthenware pans and crocks. There were also iron nail fragments, a hone stone, and pieces of amethyst that were sold to tourists from the 1820s.

One of the aims of our research at Keem has been to untangle the history of settlement in the valley.  To this end in 2017 we investigated Building 5, a smaller footprint that seemed to overlay the other buildings. Building 5 turned out to be a late-19th century herd’s hut related to grazing in the valley.

In 2018 we will carry out further work at Keem, focusing on a footprint in a discrete cluster of building strung out along a stream in the valley. The layout of this cluster is reminiscent of a booley or summer grazing settlement. It is possible that the village of Keem originated as a seasonal booley site that later expanded into a permanent settlement. This season’s excavation aims to test this theory.