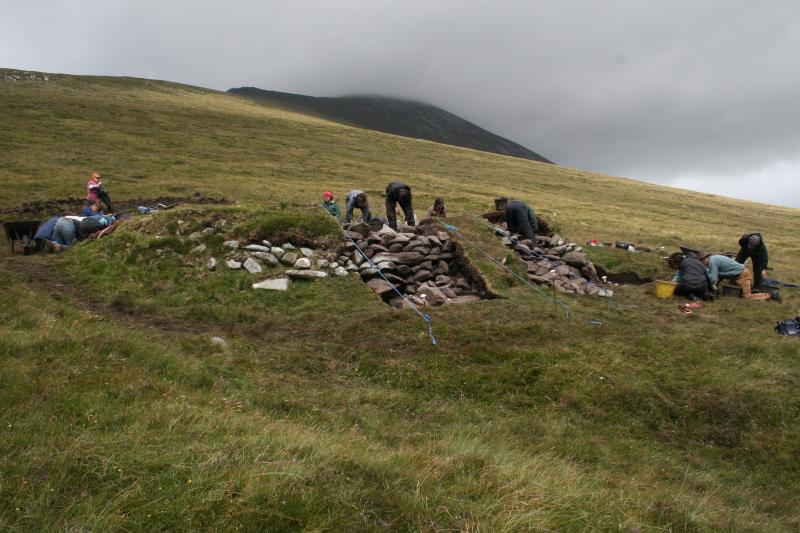 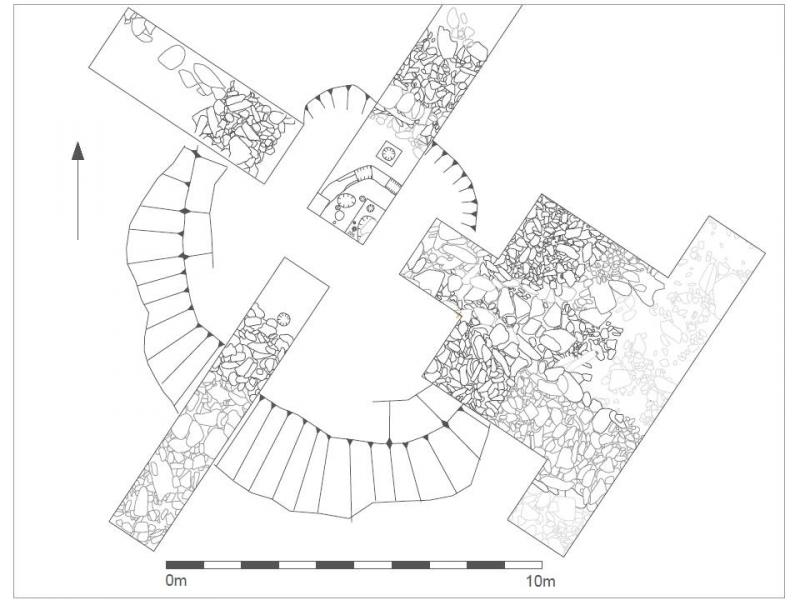 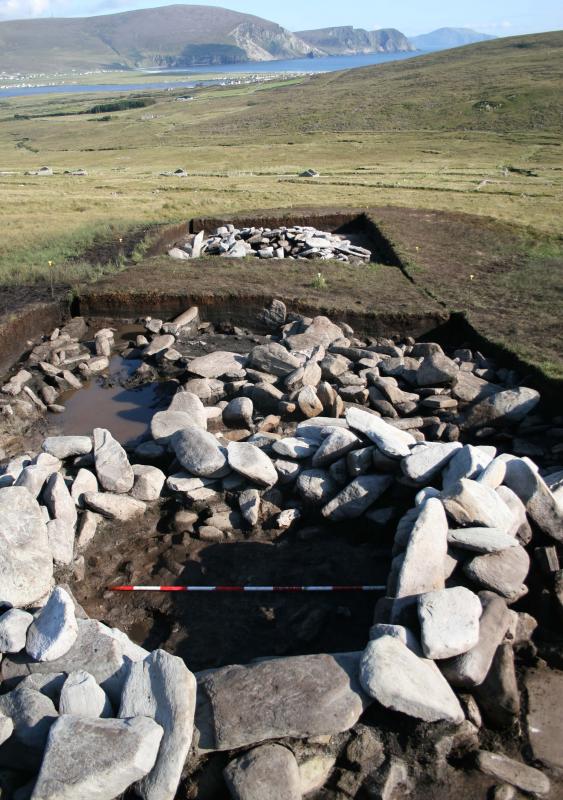 In 2006, three small test pits were excavated in one of the Bronze Age roundhouses that had been identified by the Achill Field School on the slopes overlooking the Deserted Village at Slievemore. These test pits were excavated at Round House 1 (RH1) in order to assist with a post-graduate student’s soil phosphate research but led to a five year investigation of two of these buildings which turned out to be some of the best preserved Bronze Age buildings in the whole of Ireland. Work on the first of these houses was completed during 2008 and even larger scale investigations of the second example began in 2009 which took three years to complete. These two massive stone built structures were occupied in the Middle Bronze Age, sometime around 1300 BC. They are genuinely monumentally sized structures, with elaborate entrance passages and stone built walls over 2m thick and still standing today to a height of up to 1.7m (Fig. 1) . They appear to mark the final two buildings at the western end of a well-spaced east to west row of similar houses which may contain as many as ten additional buildings. The Bronze Age houses are set within a large and complex pre-bog field system and much of the 2010 and 2011 season was spent surveying these field walls and excavating numerous trenches over them to establish their nature. During the final stages of work on the second building (RH2) it was conclusively demonstrated that three of these field walls were directly attached to the outer wall of the building. Pre-bog field walls have proven remarkably difficult to date directly and this clear association between the field walls and the residence is as important as it is rare.

As work neared completion on the two Bronze Age roundhouses attention was turned to a nearby series of terraces where two small circular foundations could just be seen poking out of the bog. In 2010 the Field School investigated the higher of these structures, revealing a circular building with a small internal area but surprisingly large walls (Fig. 3). The building was approached via a well-laid flagstone path and a much slighter sub-rectangular building had been tagged onto its downslope side. The circular building overlay a large field wall and outside the two buildings there were massive ash deposits. Unfortunately no dateable artefacts were recovered during the excavation and function and date of the site remained obscure.

In 2011 the lower of the two circular buildings on the terraces was investigated. The building was very similar in form to the building investigated in 2010 but there was no obvious entrance and almost the entire interior was occupied by a stone built fire box filled with intensely burnt soil deposits. A narrow gap through the wall led right into the corner of the firebox. This gap was too narrow to be used as an entrance passage and was almost certainly a flue for controlling airflow into the fire box. Clearly this building represented an early kiln, but what was it for? Soil samples failed to yield the expected quantities of charred grains that would be expected from a corn drying kiln. However several Early Medieval glass beads were recovered from the building, one of which was from a context closely associated with the firebox. This suggests the possibility that it may have been a glass furnace, a type site as yet wholly unknown from such an early date in Ireland although such a function remains speculative at present. That Early Medieval glass beads were recovered from what had assumed to be a Bronze Age building was quite a surprise but this date was subsequently confirmed by a series of radio carbon dates. As with the first building a small sub rectangular building had been tagged onto the downslope side of this building.