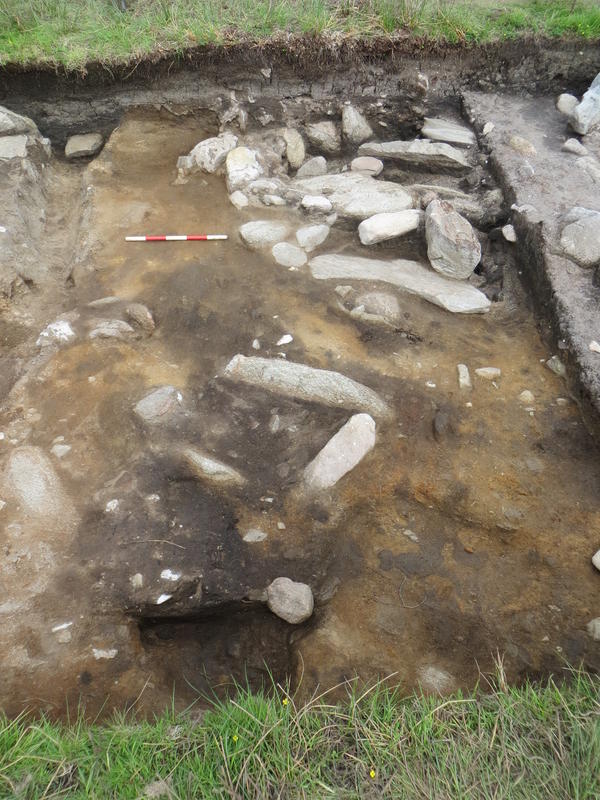 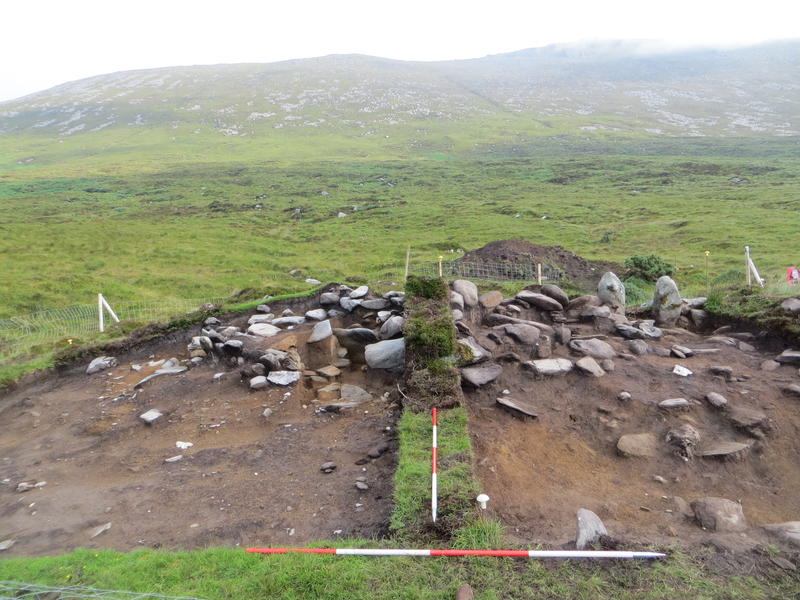 Entering the final week for the second group of four week students, the recording phase was well under way. On Monday, they continued working on the plan of Quadrant two, slowly working up the slope, whilst the rest of the students completed the section drawings of the trench sides in Quadrant 3. We were joined this week by Kat Napora, a Ph.D student from the University of Georgia in the USA who was an Achill Archaeological Field School student back in 2009. Kat began working on some of the features in the centre of Quadrant 4 that had been exposed and partially excavated by the first group of students, beginning with tracing the rest of the east-west gully that ran across the northern part of the trench.

On Tuesday, the team that had been working in Quadrant 3 took over the final stages of planning Quadrant 2, whilst the four week students began recording the sections of the trench edges, preparing the different context sheets for the individual deposits they had uncovered and undertaking a topographic survey of the trench. Meanwhile the central area of Quadrant 4 was given a very careful plan to properly define the cluster of pits that were uncovered in the central part of the trench, and having taken a new set of photographs a fourth plan of the trench was started. On Tuesday evening we had the final evening Lecture for the summer, with Professor Audrey Horning of Queens University Belfast delivering a lecture on the ‘Dungiven Costume: archaeology and the fashioning of identity in early modern Ireland’. This set of 17th century clothes was recovered from a bog in Northern Ireland and once the physical nature of the various articles had been described we were treated to a fascinating discussion of how various aspects of plantation era life and politics could be seen reflected in the costume, and how the costume had become a contested item in the modern political world of Northern Ireland. On Wednesday the students were taken on a guided tour of Achillbeg and Kildavnet led by Dr. Theresa McDonald (see week 4).

On Thursday, the four week students completed their training with the final work being undertaken on the context sheets and section drawings from Quadrant 1 and, once the fourth plan of Quadrant 4 had been completed, preparing a topographic survey of the basal layers of that trench. Thursday also saw the beginning of the complex process of backfilling the excavation, and by the end of the day the whole of Quadrant 1 was neatly filled in and the contours of the mound carefully rebuilt.

On Friday, all hands went to backfilling Quadrant 2, which was filled in up to the area immediately outside the central building, again carefully rebuilding the original contours of the slope as closely as possible. By the early afternoon the work had been completed and the students headed off for a weekend away at the nearest town on the mainland, Wesport, where they enjoyed some well deserved R & R.