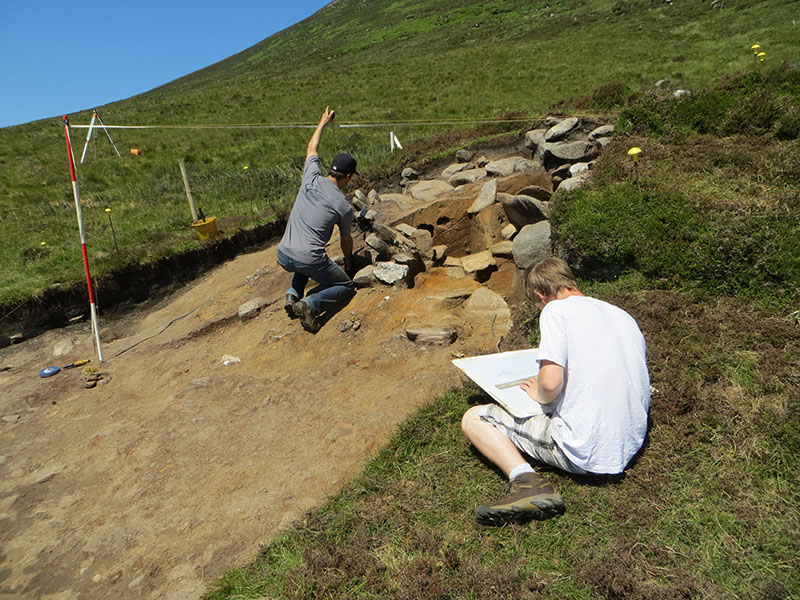 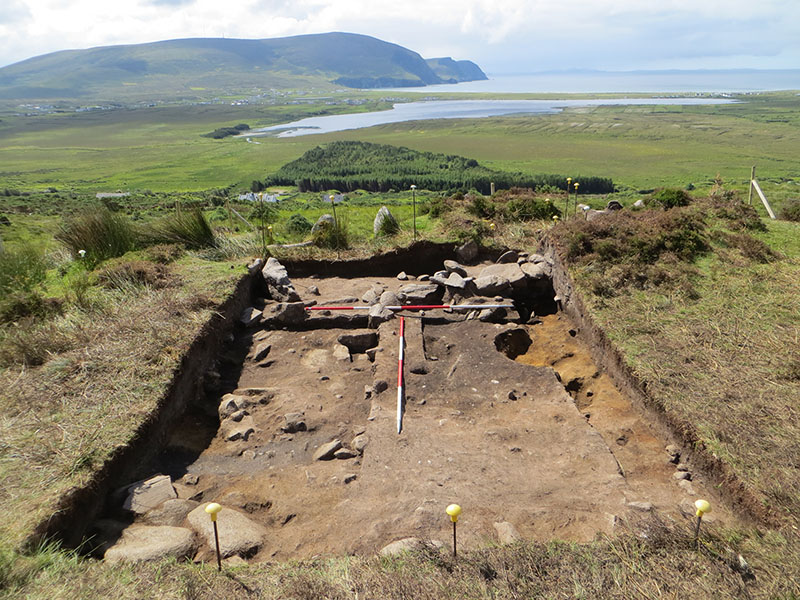 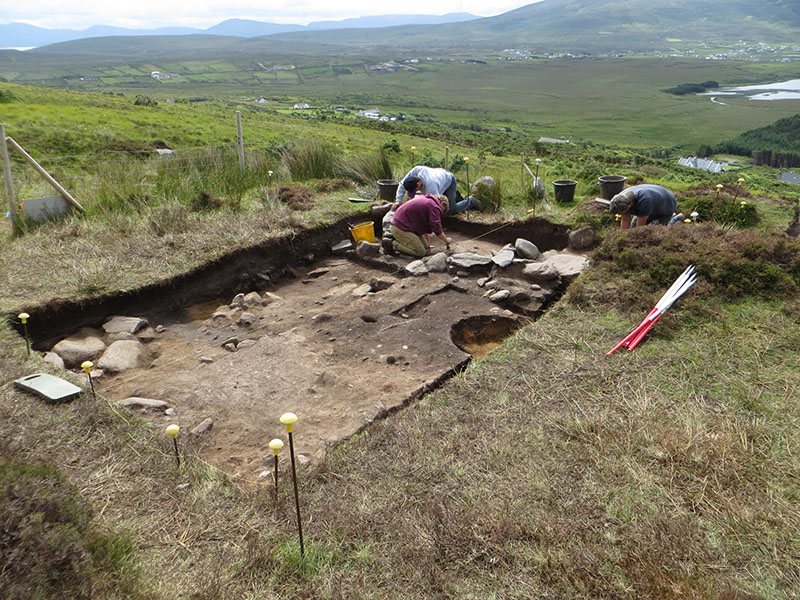 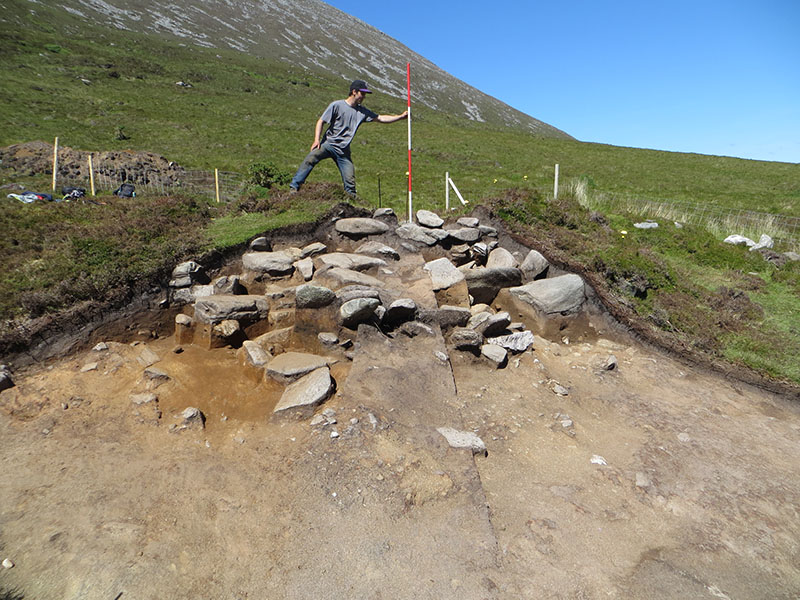 This week, work in Quadrant 1 began with cleaning and revealing the small spread of burnt material that overlay the mound. Once this was recorded,  it was sampled and then removed, allowing us to continue excavating the remaining mound in this quadrant. This was completed on Tuesday so we were able to draw the two radial sections that had been cut across the mound at the end of the third week. In Quadrant 4 the second mid-excavation plan was completed on Monday and the second topographic survey of the quadrant was finished off shortly afterwards. On Tuesday the team began to remove the next set of deposits at the east of the trench and the small features at the west of the trench, which turned out to be a series of intercutting pits and postholes.

On Wednesday the field trip was to a small islet in the channel between Achill Island and Achillbeg Island, where a very fine promontory fort, Dun na Glaise (The Green Fort) is located. The site can be accessed only at low tide and we took the opportunity to walk out to the site and undertake a detailed survey of the impressive stone banks and the intriguing building that is situated within the interior. The site was damaged during the winter storms in January and February when high waves cut into the banks in several places around the islet. The team undertook a detailed GPS survey of the site, drawing a detailed plan of the building and a series of profiles over the surviving banks. This was an important surveying project as the future of this site is rather bleak, and the survey will provide a vital record of the site prior to its destruction. That we got to spend a beautiful sunny day in such a gorgeous location was a definite bonus!  At this same location,  in similar weather conditions a few years ago, several of the students took the opportuinty to have a quick ‘dip’ in the Atlantic Ocean.

Back on site on Thursday,  the first job was to investigate the soil horizon under the mound in Quadrant 1. Two small exploratory trenches were cut on either side of the radial baulk to examine whether or not the pre mound layer was archaeological or geological. In the end it seems that this layer is geological in origin, but hopefully we can get a better look at it later in the summer, just to be absolutely certain as to its exact origin. In Quadrant 4, the team began to clean and plan the new deposits that had been revealed on Tuesday. The most important of these was a large spread of charcoal-rich soil which contained a lot of fire-cracked stones which was very reminiscent of the sort of material we find at Burnt Stone Mound Sites, called Fulachta Fiadh in Ireland, where hot stones are used to heat pits full of water prior to cooking joints of meat.

On Friday having completed the third mid-excavation plan we removed the layer of burnt soil with the fire-cracked stones which revealed a further series of pits cut into the first geological layer. These were clearly an extension of the pits we had been excavating at the western edge of the trench and appear to be filled with similar material to the overlying spread. This is exactly what we would expect from a Burnt Stone Mound site and for the first time we had a suggestion  of sorts for what may have happened at this site. If it is a Burnt Stone Mound, and this is speculative at the moment, we will have to determine the relationaship between it and the circular building atop the mound. Is  it directly associated with that activity, or does it post-date it? It will be later on in the summer when the interior of the central building is removed that we will get to find that out the answer to that question, but at this stage there are some important observations that need to be made. Firstly the association of small buildings with burnt stone mound sites is rare but not unheard of. When this association occurs, it is generally thought that the building was used as some sort of sweat house or sauna, and this could be a possible explanation for the usage of this half of the site at least. It is also clear that the chronology of activity is quite complicated because some of the pits were clearly cut through the spread of burnt stone whilst the majority were found underneath it. Furthermore the burnt stone spread can be seen disappearing under the outer edges of the collapsed building, which may indicate that some of this activity pre dates the construction of the central building. When we excavate the interior areas we shall have to be extra careful to ensure we clarify this sequence of events. Finally,  we made two other discoveries towards the end of the week. The first was that a well-defined gully could be seen cutting across the site to the north of the limit of the burnt stone spread. The second was that to the east of the spread there was a substantial pit that has been backfilled with very large stones. This seems to disappear under the entrance to the central building, which is interesting given that we are starting to suspect quite a complicated chronology, but it will be some weeks before we can investigate this rather intimidating looking feature.